A 20-year-old man who was charged for the 2017 murder of Hemant Persaud, brother of former Police Commissioner Seelall Persaud, now awaits sentencing, after pleading guilty to the lesser offence of manslaughter.

This man was charged back in 2017, when he was a juvenile, and due to certain provisions of the Juvenile Justice Act, his photograph, name, and other particulars cannot be published, because he was charged as a juvenile.

He was arraigned before Demerara High Court Justice Sandil Kissoon on Thursday, September 1, for the capital offence of murder, but has opted to plead guilty to the lesser count of manslaughter. He has been further remanded to prison, to await his sentencing hearing, which is fixed for September 26.

Reports detailed that on February 19, 2017, the juvenile, then 15, while in the company of another at Stabroek Market Square, Georgetown, had noticed the 51-year-old Hemant Persaud, otherwise known as ‘Bhim’, of Affiance Village, Essequibo Coast, in a drunken state.

Persaud, had reportedly just returned from the interior, and was purchasing items from a vendor.

This teen trailed Persaud to the back of the Stabroek Market with intent to rob him. He walked up to Hemant Persaud and demanded that he handed over a gold chain he was wearing, and when Persaud refused, the teen stabbed him in the chest and confiscated the chain before making good his escape.

Public-spirited citizens had rushed the injured Persaud to the Georgetown Public Hospital (GPHC), where he was pronounced dead on arrival.

Arrested on March 3, 2017 at his home at Sophia, Greater Georgetown, the teen had allegedly admitted, in the presence of his family and Police officers, to committing the crime.

The body of Hemant Persaud had remained unidentified for approximately two weeks at the GPHC mortuary, as his family had believed he was still in the interior. Butwhen the Police released information seeking the public’s assistance to identify the deceased, the identity of Hemant Persaud was confirmed.

His cause of death was given as perforation of the heart due to stab wounds. 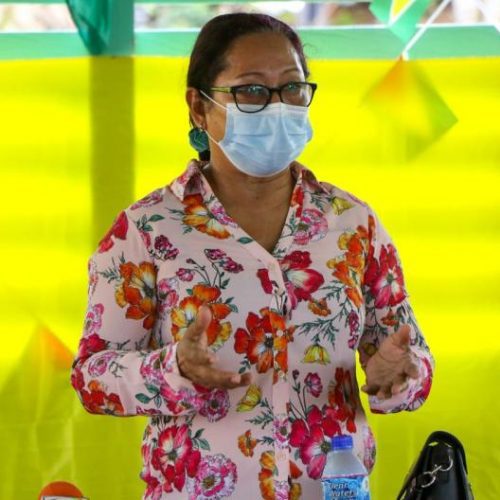 During Thursday’s court proceedings, prosecutor State Counsel Muntaz Ali revealed that the 20-year-old man, in his confession statement to the Police, had said, “I roll up on he (Hemant Persaud), I stick he up and tell he pass the chain, and he start scramble on on me. He pick up a barrier and run into me, and I ran up to he, pull off the chain, and juk he with the knife…”

According to Prosecutor Ali, the accused gave the confession in the presence of his mother, and he was also positively identified in an identification parade held at the Police station.

Asked by Justice Kissoon if he had anything to say before being sentenced, the confessed killer said, “I was young, and lack of guidance. I would like an opportunity to continue my efforts and contribute meaningfully to society, and further my studies…”

In closing his remarks, the accused begged the court for mercy and leniency, and said he would like a chance to “correct my wrong”. He was represented by Attorney-at-Law Alaira Murphy-Goodman.