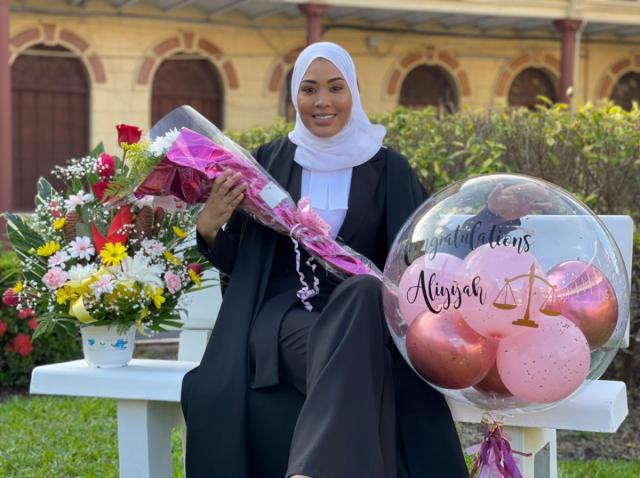 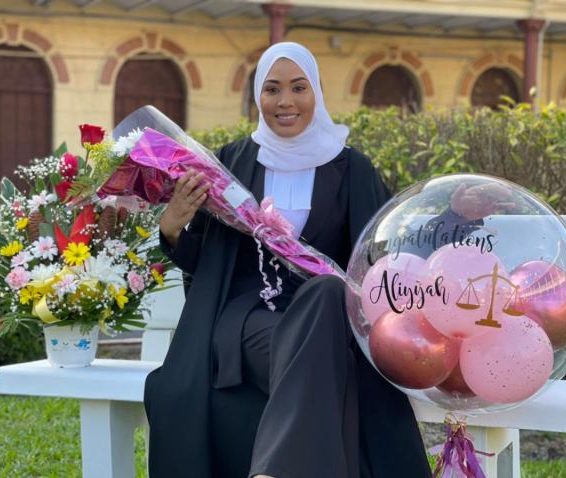 1 month ago·3 min read
ShareTweetPinShare
Home
Local News
“I vow to help others to the best of my ability” – newly-admitted lawyer
The content originally appeared on: INews Guyana
Attorney-at-law Aliyyah Abdul Kadir

Fully aware that education empowers one and provides a pathway out of poverty, the academic journey of newly admitted Attorney-at-law Aliyyah Abdul Kadir is certainly one of excellence. Her thirst for knowledge and education is evident in her academic achievements thus far.

Kadir is among the scores of students who graduated from the Hugh Wooding Law School (HWLS) this year with their Legal Education Certificate (LEC)- a prerequisite to practice law in Guyana and the Commonwealth Caribbean. Even more outstanding, she made it onto the HWLS Principal’s Honour Roll.

Kadir’s petition to practice law was presented on Thursday by Attorney-at-law Dexter Todd before Justice Simone Morris-Ramlall at the High Court in Demerara. Describing her as an outstanding young woman, Todd told the court that Kadir has not only excelled in academics but also in extra-curricular activities.

With a scholarship to attend the University of the West Indies (UWI), St. Augustine Campus, Kadir travelled to the twin-island Republic of Trinidad and Tobago and read for and obtained her Bachelor of Laws (Honours) in 2019. She would later go on to attend the HWLS.

For her exceptional performance, she was awarded the Cameron and Shepherd prize for the best performance in Civil Procedure and Practice I and II by a Guyanese student.

Todd added, “This young lady is ambitious…very soon she will pursue her LLM. This young lady is most qualified to stand before any court, not only competently as a trained legal person but she holds the character that I believe will support any good standing in this noble profession.”

Reach for the skies

For her part, Justice Morris-Ramlall expressed that it is always a pleasure to admit new lawyers. She however noted that admitting a lawyer who has ties to her hometown of Linden, Region 10 (Upper Demerara-Berbice) gives her a particular source of pleasure and pride.

“As you embark on this new chapter, I encourage you to hold still to the ethics you were exposed to at law school. They were not just for academic purposes. Be always mindful of your obligations to the Bench, your colleagues at the Bar, your clients, and other members of society. Your interactions and conduct determine what reputation you will craft for yourself. A good reputation is a key instrument in an attorney’s toolkit, without it, the other tools have minimum values…” the Justice advised the new lawyer.

While Justice Morris-Ramlall urged Kadir to find a mentor, she cautioned her to “choose wisely and be careful who you emulate.” Based on her biography, the Judge said that Kadir appears to be on the right path in relation to her social responsibilities since she has recognised the value of service to those in need from a very young age.

The High Court Judge urged the young lawyer to reach for the skies and even beyond and wished her a rewarding and successful career in the practice of law.

Uphold the rule of law

In response, Kadir, who served as Vice President of the HWLS Muslim Students’ Association, vowed to uphold the laws of Guyana and the rule of law as she embarks on her career in the legal profession. She said that she will conduct herself in a manner that is in keeping with the profession and ethical obligations.

“[I vow to] to discharge my duties to the court, to my clients, and my colleagues and members of the public with dignity and integrity and most certainly to be kind and respectful but most importantly, I vow to help others to the best of my ability,” the Attorney-at-law pledged.

She credits her success firstly to God, family, and friends, and all who helped her in one way or another during the past five years.

“I am here today because of not only the tremendous sacrifices of myself but of my supportive family. All of these people have played a pivotal role in molding me into the young woman and the now Attorney-at-law I am today. My academic journey does not end here. Just as I was able to excel in my legal studies. I undertake to employ the same work ethics in my legal career…” she added.