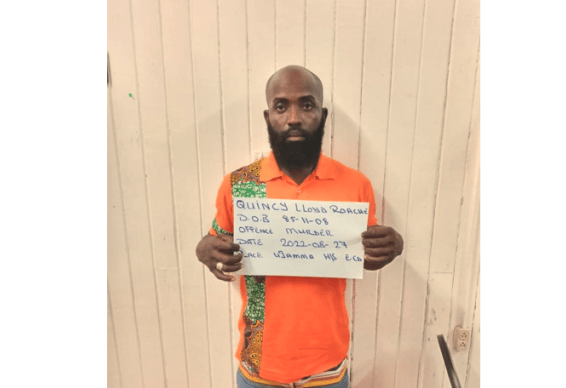 4 weeks ago·5 min read
ShareTweetPinShare
Home
Local News
‘I hope justice is served and my son learns from this’ – mother of LBI murder accused
The content originally appeared on: INews Guyana
Quincy Roache

The mother of 36-year-old businessman Quincy Roache has broken her silence on the heinous murder of his reputed wife, 28-year-old Tacina Dazzel, who was the mother of a six-year-old boy.

In a social media post, the murder accused’s mother, Karenandrea Kilkenny, says she is full of regret because of the cruel actions of her son.

Roache on Tuesday appeared before Magistrate Rushelle Liverpool at the Sparendaam Magistrate’s Court where he was not required to plead to the charge and was remanded until October 14, 2022.

Dazzel, of La Bonne Intention (LBI), East Coast Demerara (ECD), lost her life at around 23:35h on August 26 when her reputed husband bludgeoned and stabbed her almost 16 times about her body.

“It is with misty eyes, a sunken heart, and a dispirited soul that I sincerely and regretfully announce that my son has killed his girlfriend. As a mother, I do not condone such a horrible act and would like to give my full condolence to the family of the deceased…,” the mother expressed.

The remorseful mother further expressed hope that her son had come to her with his issues, and maybe, she could have provided better guidance.

“In retrospect, I wish my son had consulted me so that I could have advised him and rendered to him a peaceful solution.”

The mother affirmed that even though the couple might have had misunderstandings, her son had no right to hurt Dazzel.

“God is the one that gives us life and only. He is the one to take our life…no one else. As a mother, I feel also that I have lost my son and cannot express enough the remorse and sadness I feel for the family of the deceased. At the moment, my heart is racing, my livelihood is crushed, and my limbs are numb from this experience but I will continue to pray and ask the Almighty to navigate the turbulence that both families must endure.”

The accused’s mother, who identified herself as a feminist, said she will never condone any form of violence, especially against women.

“As a mother, woman, feminist, and daughter of the Almighty, I do not in any way, shape or form condone violence against women, especially after being victimized myself. I will continue to lash out at injustice against women and advocate on their behalf,” she said.

The woman also said that even though it was her son who committed the act, she prays that Dazzel’s family receives the justice they deserve.

“As the criminal justice system does its work, I hope that justice will be served and that my son learns from this experience. As a mother, I still love my son but hate his action because it is my view that a man’s worth can be measured by the love and respect he shows to his mother.”

“I feel so betrayed, unwanted, and unloved that my son did not call me for help before the commission of a such heinous act. Please join me in prayers for the family of the deceased.”

Dazzel, a former clerk of the Georgetown Public Hospital (GPHC), had shared a two-year relationship with Roache, and had confided in family members about the constant abuse she was receiving.

The police reported that Dazzel and the suspect had shared a common-law relationship, but would often have domestic issues, which she had never reported to the Police.

It has been reported that on the night of the murder, Dazzel’s cousin, who was also her neighbour, was awakened by loud screams coming from Dazzel’s home. As such, this cousin immediately opened her door, and saw Dazzel running out of her yard and onto a bridge, where she collapsed and remained motionless. 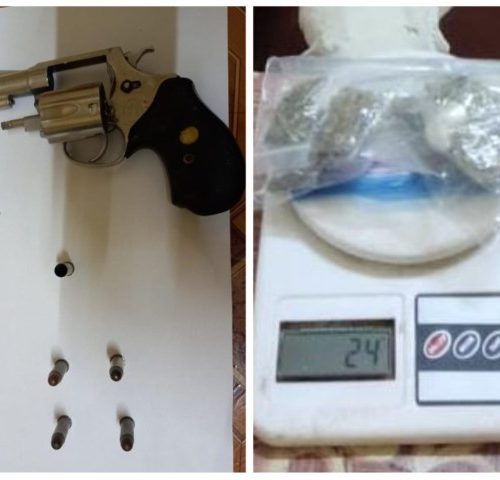 Soon after, Roache exited the house and boarded his minibus, and she heard him shout: “Now y’all can call the Police! I done do what I had to do!”

The injured Dazzel was picked up and taken to the Georgetown Public Hospital, where she was pronounced dead.

Roache, according to the Police, went to the Turkeyen Police Station and confessed to killing the woman. He subsequently told detectives that he went through the woman’s mobile phone and saw a conversation between her and another male. This, he claimed, led to an argument, during which Dazzel picked up a knife and cut him on his left middle finger, and he, in retaliation, took away the knife and stabbed her several times about her body.

A close family member later related that Dazzel had constantly been subjected to physical abuse by Roache, and that Dazzel’s entire family had been aware of the situation. The relative stated that Dazzel usually confided in them, and had told them on many occasions that she had been severely beaten by the suspect. They said the abuse had been so bad that, only two months ago, the suspect had battered the woman brutally to the point where he had broken both her nose and jaw.

This relative explained that the suspect had become so obsessive that, unknowingly to Tacina, he had linked her phone to his, and he was able to monitor all her conversations with her friends and family members. When she found out, she was unable to cry for help.Earlier this month, Dazzel, in voice messages heard by this publication, referred to the suspect as a ‘narcissist’, while crying that she could not continue to live with him because of his abnormal behaviours.

“…a veil just come off my eyes in the past couple of days, and I need the first door out of this relationship. The manipulation is too much…a word came to me while I was sleeping: ‘narcissist!’ and two or three times this word keep waking me out of my sleep. When I researched the word, my jaw could have dropped. That is everything that he is right now…I can’t live with a mad man,” she was heard explaining.

“Everybody is telling me I should be wise enough to leave, that they expect better from me; but, trust me, when you are in it, it is different from when you from the outside looking in”, the late Tacina had stated in her messages to relatives.

However, hours before the murder, Tacina and her son had gotten dressed and had gone to an ice cream banquet at their church — an annual event organised by Tacina’s father. Upon returning home, the man allegedly hid in the house and stabbed the woman some 16 times about her body in front of her six-year-old son.