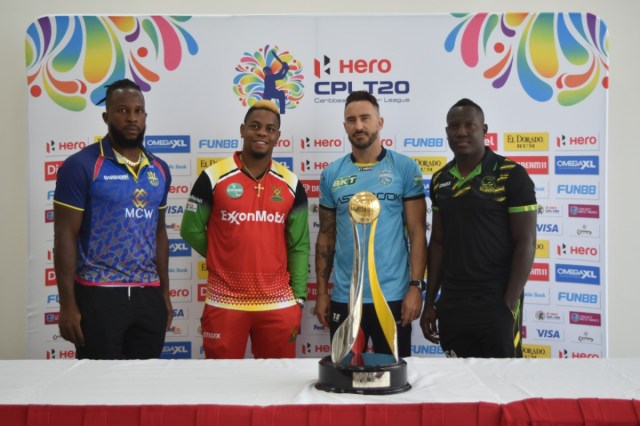 2 months ago·3 min read
ShareTweetPinShare
Home
Local News
HERO CPL 2022: Teams confident ahead of Playoffs
The content originally appeared on: INews Guyana
The four captains that will be leading their troops on Tuesday and Wednesday with hopes of grabbing a spot in the Hero CPL 2022 Final set for Friday, September 30, 22022 at the National Stadium, Providence

Playoff fever will hit Guyana tomorrow – Tuesday, September 27,2022 – as the 2022 Hero Caribbean Premier League (CPL) heads into the nail-biting, back end of the tournament.

With the Guyana Amazon Warriors (GAW) qualifying alongside the Barbados Royals, St Lucia Kings and Jamaica Tallawahs, the teams are promising their ‘A’ game at the Playoffs matches set for Tuesday and Wednesday.

Those assertions were made earlier this morning, as the top four captains gathered at the Pegasus Suites and Corporate Center, to share expectations and thoughts on their team’s performance in the tournament thus far.

“Things been great. 8 games out of 10, you know, I think the boys have been playing some great cricket. Just unfortunate we lost the game last night, we really wanted win the game to go into the playoffs with some momentum, but I think the guys have been awesome,” Barbados Royals Captain, Kyle Mayers shared.

He added, “They’re still in the game, very high spirited and ready to go for tomorrow.”

On the other hand, Guyana Amazon Warriors, Captain Shimron Hetmyer, explained, “The start wasn’t what we expect as a team as well, but I think, the guys, when the got back to Guyana, their spirits were much higher than I expected and they’re ready to go, with the crowds.”

“As I say, the twelfth man really plays a part. So, I think having the crowds here and knowing the conditions as well as we do, I think the guys are really, really up to the challenge, they’re been playing fantastic cricket for the past four games, its just for us to continue,” he further shared about the crowd at home.

He said, “I think the only difference, so far, is obviously that extra game that you could’ve played. There’re four strong teams in the competition, really impressed with how the wicket’s been playing. I think it’s, my experience from the past years, it’s a nice cricket wicket, setup for what would be quarterfinals and semifinals over the next two days.”

Additionally, Jamaica Tallawahs Captain was quick to admit his team’s faults while looking ahead.

“I think it’s been a up and down season for us as a franchise but having said that, I think the guys have played some really good cricket in patches. The guys are up for the challenge and are looking forward to what the finals weekend brings,” Powell remarked.

The JT Captain added, “It’s basically the business end of the competition and its time for us to possibly bring our ‘A’ game and I think the guys are chomping at the bit to do that.” Closer to home, the GAW Captain Shimron Hetmyer is focused on maintaining positive vibes in his camp. This, of course, means that the captain is not trying to create pressure situations for his players, especially regarding form ahead of the all-important clash tomorrow.

“As it is, we basically back our players regardless of if they get runs today, they get runs tomorrow, whenever they do or even if they don’t, we still back the players,” the GAW Captain explained.

He added, “We try as much to give them that energy, give them that support that they would need from us, even if they want to go early and hit a few balls, we’ll find a way to get that done. I think that’s all you have to do as management to make sure that you support all your players and make sure that they’re as comfortable as possible to succeed.”

The Amazon Warriors and the Barbados Royals will lock horns in Qualifier 1 tomorrow beginning at 10am or 10:00h, where the winner will head straight to Friday’s Hero CPL Final.

At 7pm or 19:00h, the Tallawahs and the Kings will battle to stay alive in Eliminator 1. Then, on Wednesday night, the winner of Eliminator 1 will play the loser of Qualifier 1 for a shot at the Final.

Tickets for the playoff games are still available and can be purchased at the GAW Box Office, at 233-234 Camp Street, Georgetown.