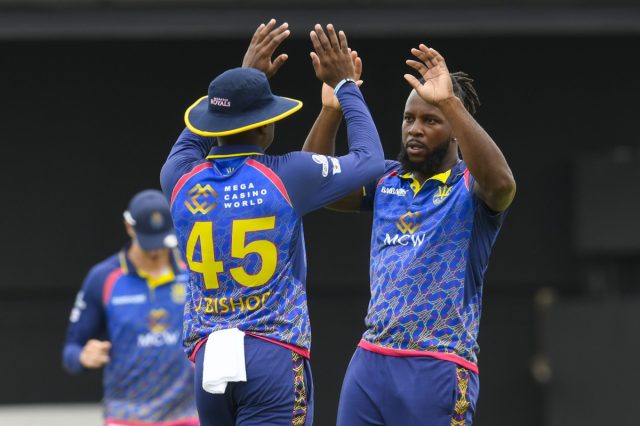 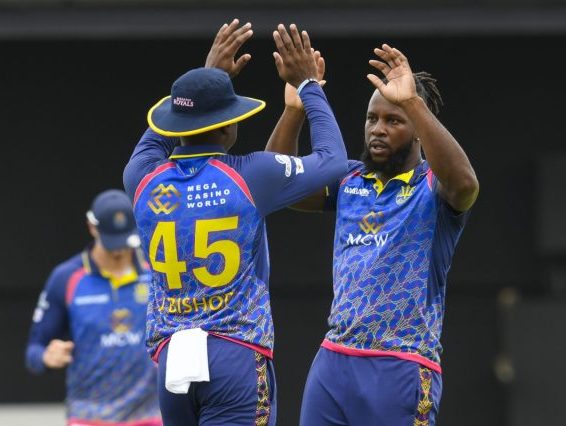 The Barbados Royals made it two wins from two with a comfortable DLS victory against Saint Lucia Kings in game six of the Hero Caribbean Premier League (CPL).

The Kings won the toss and opted to field first hoping to take advantage of the effects of the inclement weather. However, that decision backfired somewhat as Kyle Mayers and Rahkeem Cornwall once again got off to a flyer in the PowerPlay.

The Kings managed to slow the innings down in the middle and back end with wickets at regular intervals but that did not stop the Royals from posting a very challenging 162/7.

In reply, the Kings chase was almost over before it began with Mayers removing the top order with a two-over spell of four wickets for four runs.

Rain threatened to end the match with a no result but DLS reset the total to 103 to win from 9 overs. Faf Du Plessis and Alzarri Joseph took the game down to the last over but ultimately fell short with the asking rate proving too much.

The tone for the Royals’ victory was set with the power of their opening partnership. They raced to 49 runs before Cornwall was dismissed for 32 off 17 balls.

When Mayers departed for 36 with the scorecard reading 76/2 the Royals looked set for a huge total, however, between the 13th and 17th over no boundaries were scored and regular wickets fell to seemingly hand the Kings the advantage.

However late order hitting from David Miller and Joshua Bishop ensured a competitive total was set all the same.

Kyle Mayers was yet to bowl in this year’s Hero (CPL) but when he was handed the ball at the beginning of the Kings innings, he produced a devastating two-over spell that ended the game as a contest.

His clever in-dippers cleaned up Johnson Charles and Roston Chase’s middle stump before also dismissing Mark Deyal and Roshon Primus to leave the Kings tottering at 10/4.

The rain came to offer some respite but when the players returned the Kings needed a highly improbable 93 runs from 30 balls.

Some enterprising hitting from Alzarri Joseph and Faf Du Plessis nearly pulled off an unlikely heist, but the equation proved too steep to overcome. (CPL)