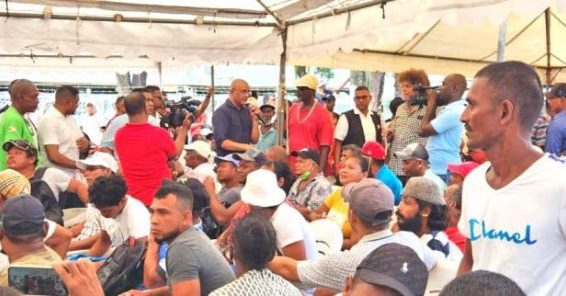 The Guyana Government has admitted that efforts at a diplomatic resolution of the Suriname fishing licence impasse have so far failed, with Vice President Bharrat Jagdeo standing firm following the summoning of Guyana’s Ambassador and the Ministry’s issuance of a statement telling Guyana to wait for a diplomatic solution.

On Saturday, Jagdeo made it clear that Guyana will not be waiting but will be acting to protect its people. Recently, the Vice President had said that Surinamese businesses in Guyana would receive reciprocal treatment, a statement that seems to have drawn rancour in Suriname.

“When I raised the matter, for one and a half years we been trying, through diplomatic channels, to resolve this. And they promised us, in writing, 150 licences to our fishermen… I raised it and said there must be reciprocity in international trade and relations. The way you treat us, we will treat you,” Jagdeo said.

“So, I saw they issued a statement, their Foreign Ministry, that I must be patient and await diplomatic efforts. But we’ve waited a very long time. And our fishermen are being harassed there. And the diplomatic efforts are not yielding any results. That’s a merry go round they have us on there. But we’ll stand up for the people of this country.”

Meanwhile, the Foreign Affairs Ministry released a statement recounting the sequence of events from the time it got involved in attempting to resolve the fishing licence impasse between Suriname and Guyana.

The matter was first raised at the presidential level in 2020, at the 1st convening of the Agriculture Working Group. According to the Ministry, despite agreeing at the time to grant the licences, this did not materialise.

“In agreeing to the granting of the licences, the Government of Suriname indicated that it would set up a Government -owned company to be the business partner of the Guyanese fishermen with which they will sign a Vessel basing Agreement, and which will take care of the registration of the vessels of the Guyanese fishermen. This was in keeping with Suriname’s fishing legislation.”

“The Government of Suriname also proposed the conclusion of a Fisheries Agreement between the two countries which would also address the granting of licences. Guyana continued to engage in the discussions with Suriname in good faith with the expectation that they would result in a mutually beneficial arrangement.”

Guyana’s Ambassador in Suriname, Keith George, was recently summoned to a meeting with the Surinamese Foreign Minister, Krishna Mathoera

A situation had arisen whereby persons in Suriname were renting licences to Guyanese at exorbitant prices. It was explained that the Surinamese Ministry of Agriculture had requested the names of these middlemen from whom the Guyanese fishermen were renting their licences. Further, a number of criteria were outlined for the formation of the company.

The Ministry noted that Guyana complied with all the requirements Suriname set out for granting the licences. They explained that Guyana has not received formal or substantive communication from Suriname since January 2022.

According to the Foreign Affairs Ministry in the statement, it is evident that diplomacy has so far failed at getting the licences for the fishermen to fish, unharassed. However, Guyana remains committed to good neighbourly relations with Suriname. 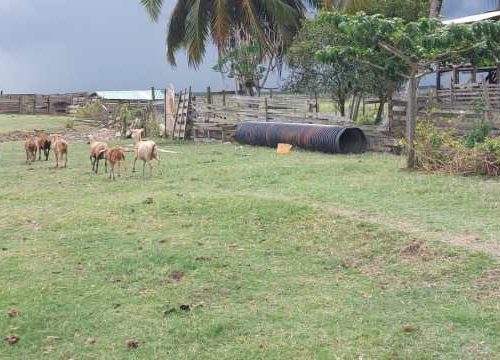 “While the foregoing diplomatic and political initiatives were being undertaken, Guyanese fishermen continued to be harassed in Surinamese waters as they attempted to continue to ply their trade for their subsistence and that of their families. Matters escalated this year when Suriname confiscated three Guyanese fishing vessels along with their nets and engines and sold the catch.”

“Following the conclusion of the matter, Guyana reached out to Suriname to release the vessels on humanitarian grounds, but there was no accommodation to this effect. It is evident that the diplomatic engagement has so far not reaped the desired outcome. Guyana remains committed to good neighbourly relations with Suriname,” the Ministry said.

Following the high-level meeting in Guyana during August 2021 between President Ali and President Santokhi, the two leaders had issued a joint press statement indicating that the age-old issue of licences for Guyanese fisherfolk to operate in Suriname’s territorial waters would be addressed.

These fishermen operate from the Corentyne coast and have to use the Corentyne to get access to the Atlantic where they get most of their catch. The Corentyne River is considered Surinamese territory. Currently, the licences are issued to Surinamese businessmen at US$100 per year and rented to the Guyanese fisherfolk at US$3000 annually.

Guyana has already said that it will be bringing this matter before the Caribbean Community (Caricom), since Suriname is also a member state. Moreover, Attorney General Anil Nandlall has also said that legal measures could be taken, if necessary, to get compensation for the fishing boats and equipment that Suriname had seized and subsequently sold.

These remarks from Government had resulted in Guyana’s Ambassador in Suriname, Keith George, being summoned recently to a meeting with the Surinamese Foreign Minister, Krishna Mathoera, on this very issue.