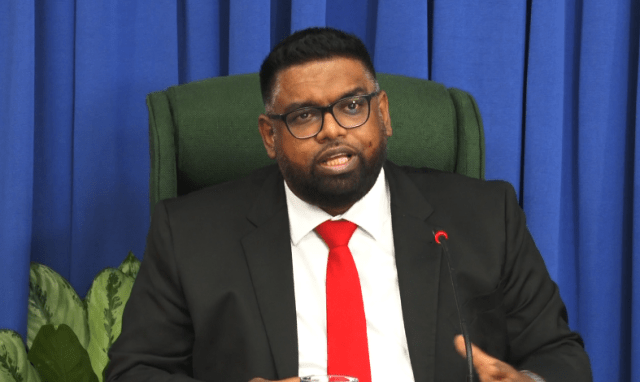 Very soon, the Guyana Government will launch a programme whereby criminals who want to change their lives, can have a frank discussion with officials.

President Dr Irfaan Ali made this announcement today as he discussed in detail the crime situation in the country and how his government intends to address it.

Among the measures he unveiled is this new initiative which will give a second chance to persons who chose a life of crime.

Noting that the project will be completely confidential, the Head of State said “once you want to change your life, we want a discussion with you, we want to talk to you, to give you an alternative pathway to earn an honest income and living a decent life.”

“We want to work with you on giving you a better option at life,” he added.

President Ali noted that the Guyana Police Force’s (GPF) statistics show that countrywide, crime has decreased by 19.4% compared to the same period last year. However, he noted that the situation is different regionally, with Regions 1, 6, 7, and 9 recording increases in Robbery Under Arms.

He pointed out too that Region 1 has the largest increase in crime across the country with a 132.4% increase. According to Ali, the strategy is to look at each area individually to find out what is the reason for the crime rates there.

For instance, he said Region 1 has seen an influx of migrants who have their own social and economic issues, and these must be considered in the GPF’s crime-fighting approach.