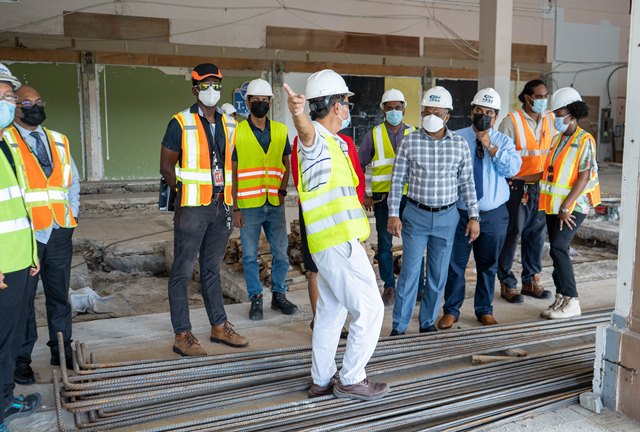 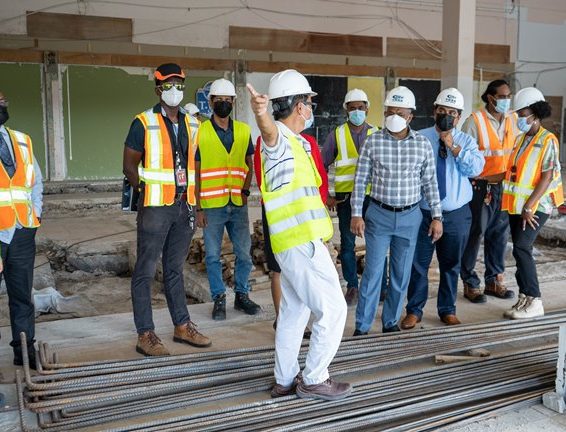 Ongoing works inspected by Minister within the Ministry of Public Works, Deodat Indar

Minister within the Ministry of Public Works, Deodat Indar on Wednesday declined China Harbour Engineering Company’s (CHEC) request for an extension of its deadline to complete additional works at the Cheddi Jagan International Airport (CJIA).

CHEC had requested a deadline extension to April 2022, but Minister Indar insisted that the work, which is currently at a progress level of 20 per cent, must be completed this year.

“We’re not discussing any extension. On the 15th of November, of this year, the engineers will go back and they will do a certificate of completion, which is to determine progress works. At that point, we will know exactly what (is the) percentage completion, what are the issues, and then we will have that discussion. But not now.

“I want to make sure that just cause is shown, and try your best as a company -you have 120 workers here-to ensure that you push the work.”

The Minister visited the project site to get an update on the progress of works, after he received complaints about it and other related developments.

The works being done by the contractor include an extension for two new air bridges and rehabilitation work addressing over 1,500 defects, which resulted from poor quality of work by the very contractor. The Minister was informed that 88 per cent of the over 800 defects has been resolved.

Speaking about the request, the project manager, Carissa Goodings said, “They have requested for an extension in time due to delays in terms of freight. They would have also included for buried utilities, underground utilities that we have encountered when we would have been doing our excavations. So, those are the two major causes for delays.”

Minister Indar expressed particular concern about the pace of the project, given multiple timeline breaches. He said that a lot of work went into negotiating solutions with the contractor.

Asked if he is confident of the company’s ability to sufficiently bring the project to a close, the minister said that the government had a lot of reservations when it first assumed office.

He said when the PPP/C Administration came into office, President Dr. Mohamed Irfaan Ali himself had to get involved, speaking with the senior management of China Harbour to determine a way forward.

The government held numerous meetings and inspections with the contractor to resolve issues, and it will continue to advocate for the project to be completed sooner, rather than later. [DPI]