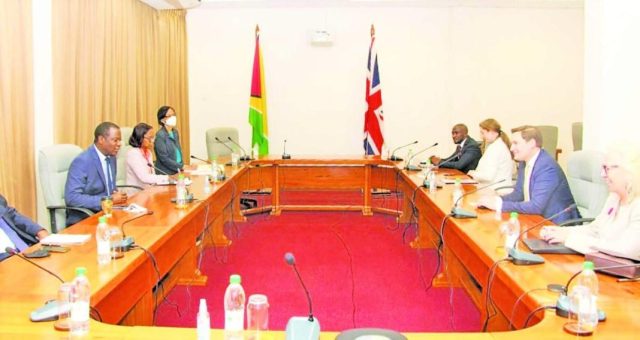 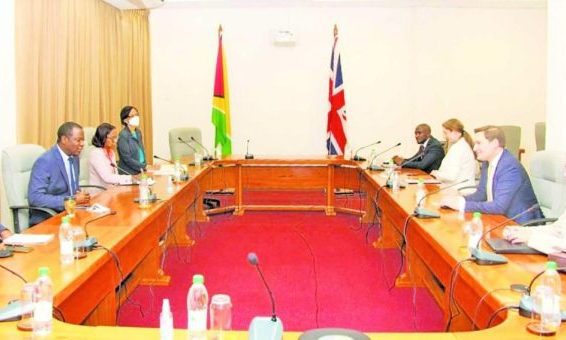 Govt pushing for removal of visa restrictions on Guyana-UK travel

With a delegation from the United Kingdom (UK) in Guyana to discuss bilateral trade opportunities, Foreign Affairs Minister Hugh Todd used the occasion of their meeting to push for, among other things, the removal of visa restrictions for Guyanese to travel to the UK.

During the engagement, Todd highlighted that the political agenda of the Government of Guyana and the United Kingdom aligns well as both Administrations firmly uphold the pillars of democracy, good governance, and transparency.

He also informed the delegation that the Government of Guyana is on a quest to create an environment that is conducive to business, as it recognises the importance of “ease of business” in attracting investors to Guyana.

It was also not lost on the group that Guyana’s economy is set to undergo a transformation in terms of Gross Domestic Product (GDP), owing to the oil wealth. Despite these developments and Guyana being a part of the Commonwealth, a visa restriction is still in place for travel to the UK.

Todd, a release from the Foreign Ministry said, emphasised the importance of the removal of visa restrictions to facilitate the travel of Guyanese to the UK to develop business relations.

It was only last month that the Georgetown Chamber of Commerce and Industry (GCCI) had said it was lobbying for the return of visa-free travel to England, especially in light of the increased business activities which are slated to take place between the two nations. Additionally, they had pointed out that this is a privilege Guyanese once enjoyed.

Their latest advocacy was done on October 4 when the GCCI met with the British High Commissioner to Guyana Jane Miller.