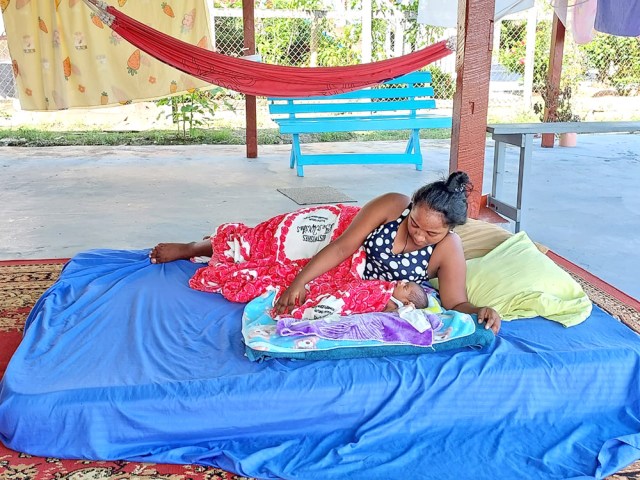 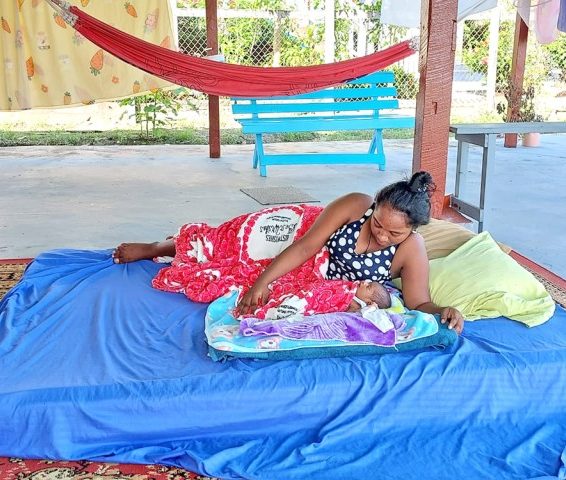 A first-time mother reportedly contracted an infection after being put on a dirty delivery table at the New Amsterdam Hospital.

Twenty-three-year-old Narvanie Beerbusham of Albion Front, Berbice, Region Six (East Berbice-Corentyne), said the conditions at the New Amsterdam Hospital were so filthy that she refused to brush her teeth during her period of hospitalisation at the facility.

In fact, it resulted in her getting an infection and she is pleading with authorities to raise the standards of the health institution.

Beerbusham was admitted on November 1, and delivered a 2.8kg baby at 04:10h the same day.

The woman gave a very grim description of the labour room as she recounted her experience.

“My real problem was the condition of the place. I couldn’t stay in there that is why I try to come out as early as I could.”

The stench in both the labour room and the washroom in the ward, Beerbusham said, has left an embedded impact on her life.

According to the young mother, both areas are not cleaned as often as they should be.

She told this publication when a mother is finished giving birth, the table in the labour room should be sterilised before another patient is made to lie on it.

“The place stink… stink, stink, stink. I scorn to go on the bed but just because of pain I had no option. When I ready to go up on the bed then I see the midwife spray something under the sponge thing on the bed because she notice like the smell was heavy. I thought it was the thing in the bin but it wasn’t that the bed was smelling like that,” Beerbusham described.

She said when she went to the ward things did not get better.

“The washroom and that place was another mess. To me like the entire hospital like it is in a mess. The water in the bathroom is about ankle height… is share bloody water because is pregnant woman.”

She pointed out that during her stay she refused to even brush her teeth because of the condition of the washroom area.

The woman explained that she subsequently got an infection which she believes she picked up from the labour room.

According to her, there were two persons in the labour room.

Subsequently, she went to the Port Mourant Hospital after developing some complications.

“From the time I climb up on the bed there the doctor say that I get infection and I got to go the next day fuh she treat it.”

Beerbusham further related that she was advised by a doctor at the Port Mourant Hospital to revisit the New Amsterdam Hospital.

However, she refused to act on that advice and instead went to a private hospital where she had to pay $160,000 for a surgery that was performed and a three-day hospitalisation.

“I myself have received some of these complaints. In fact, I have seen some of the footage that someone has sent to me with goats invading the Hospital,” Region Six Chairman David Armogan who has oversight for the New Amsterdam Hospital said in an invited comment.

“That should never happen. The fence is not damaged. So, the only place they could have come in from is the gate and we have guards at the gates.”

According to the Chairman, in another incident this week two persons went to the hospital for treatment after being involved in a fight in the town.

“What happened after that is that six others went into the hospital to continue the fight in the hospital. That matter was not reported to us neither to the Regional Health Officer.”
During the incident, several pieces of equipment and furniture at the hospital were damaged. The Police have been asked to intervene and several persons have since been arrested.

Armogan said many incidents which occur at the region’s premier medical institution are not being reported. This, he said, prevents the appropriate action from being taken.

“This is not good for the image of the hospital,” he added.

He also pointed out that security guards are demanding that visitors to the hospital pay them to enter if they are attempting to go outside of the prescribed visiting hours.

As it relates to the cleanliness of the institution, the Chairman noted that he continues to receive reports of negligence.
He pointed an accusing finger at the maids saying that they would only clean once per day.

“Cleaning has to be continuous because there are some patients who can’t help themselves. As a result, you can’t be cleaning only in the morning and you finish and sit down for the rest of the day. This is one of the things we have to put in place.”

He said a meeting was planned with the Chief Executive Officer (CEO) of the Hospital for Thursday afternoon to discuss some of the issues.

Asked whether the regional administration was satisfied with the performance of the CEO, Armogan said once they keep getting complaints it means that things are not going right.

“If things are not going right then whoever is heading the section had to account for it,” he said.

Armogan suggested that the cleaning of the hospital should be put in the hands of a private firm. [First published in the Guyana Times]