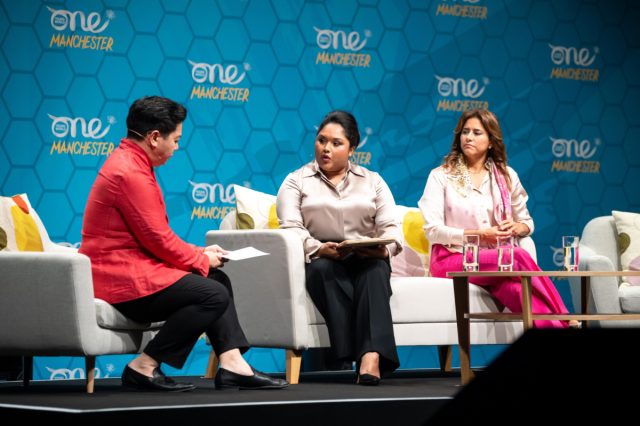 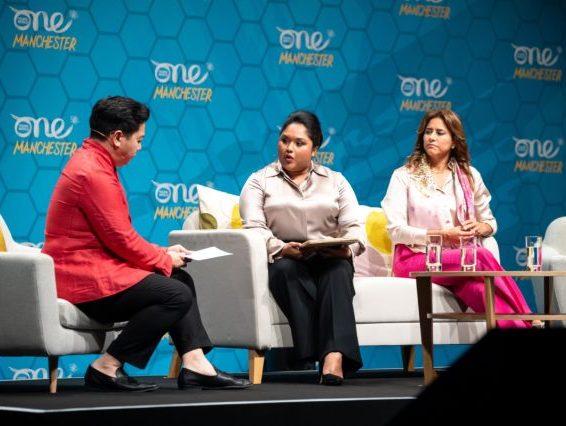 First Lady Her Excellency Arya Ali on Wednesday joined more than 2,000 young leaders from across the globe at the One Young World 2022 Summit in Manchester, United Kingdom, where she participated in a panel discussion on education, gender equality, and women in leadership.

Earlier in the week, Mrs. Ali joined the Duke and Duchess of Sussex, Prince Harry, and Meghan Markel, along with other political and business leaders at the opening ceremony.

On Wednesday, the First Lady shared the stage with former First Lady of Colombia, María Juliana Ruiz, for a First Lady’s Session which focused on global challenges which disproportionately affect women and girls.

Mrs. Ali and Mrs. Ruiz are founding members of the Global Network of First Spouses which works closely with the One Young World group to achieve the Sustainable Development Goals (SDGs).

In the area of gender equality, Mrs. Ali underscored the need for women to be economically empowered to lead independent lives.

“One of the reasons gender-based violence exists is because of an imbalance in power relations between men and women and this often time happens because women do not have equal access to the same economic opportunities as men,” she said.

To support the economic advancement of women, the First Lady shared that her office has been providing fully funded academic and technical skills training scholarships to victims of domestic violence who are in institutional care.

She also brought into the spotlight, her groundbreaking period poverty project – dubbed the Menstrual Hygiene Initiative – noting that it has been one of the barriers to girls receiving a quality education.

Referencing a recent study by the Ministry of Education which shows that girls are at a high risk of experiencing learning loss or dropping out of school altogether because of their inability to afford or access sanitary pads, Mrs. Ali told the gathering of more than 2,000 young people that she could not sit by and not do anything about it.

“This is why I embarked on an ambitious initiative… which aims to provide every school-aged girl free sanitary pads at no cost to them. This provides our girls equal access to educational opportunities. Better education for our girls will mean better economic opportunities for them,” she stated.

Shifting her attention to women in leadership, Mrs. Ali dismissed the idea that women ought to prove that they deserve a seat at decision-making tables.

“Defending why the representation of women in leadership positions matters is akin to defending someone’s right to live. The fact that women make up just about half of the world’s population is sufficient enough a reason for us to be represented equally at all levels of decision making,” Mrs. Ali said to a thunderous round of applause.

She went on to add that for too long women have sat on the sidelines and watched men make decisions that impact their personal and professional lives and they have had little to no input.“No longer will we be complicit. No longer will it be a man’s world,” she said, to another round of applause.

The One Young World Summit brings together youths from all over the world who are actively working to positively transform the socio-political landscape in the areas of human rights, the environment, gender equality, discrimination, and injustice. (Office of the First Lady)