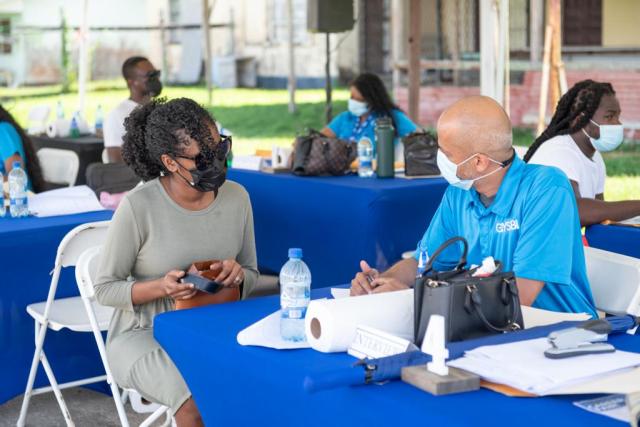 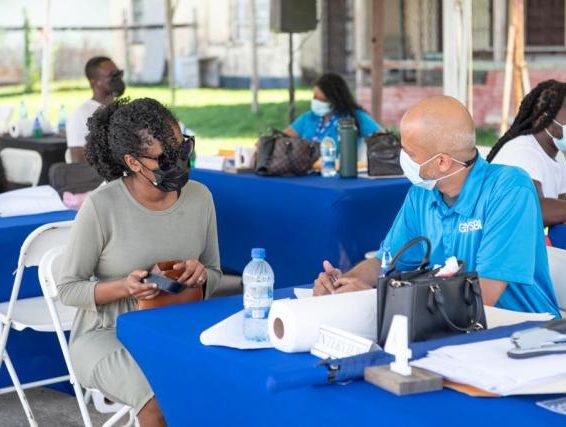 During a visit to the Guyana Shore Base Inc’s (GYSBI’s) career fair held at the Uitvlugt Community Centre Ground, WCD on Sunday, Finance Minister Dr Ashni Singh urged Guyanese persons to capitalise on job opportunities being offered in the oil & gas sector.

The Minister commended the company for arranging the event as well as a larger series of career fairs, while noting that the event provides ample illustration of the job opportunities that have arisen and will continue to arise due to Guyana now being an oil and gas producer.

Minister Singh further emphasised that Government would like every Guyanese to be an active participant in the exciting transformation underway in Guyana by taking up the thousands of job opportunities that will inevitably arise.

At the event, Minister Singh highlighted the extensive training opportunities being created by Government to ensure that Guyanese workers are equipped with skills relevant to the oil and gas sector and other new and emergent economic activities. These include Government’s investment in universal primary and secondary education as well as technical and vocational education, along with the GOAL scholarship programme.

The Minister also highlighted many aspects of the economic transformation that is expected to take place in Region Three specifically, including private investment in new shorebase facilities, and new industrial activity expected to come on stream with the Wales Development Authority and the landing of the gas-to-shore project.

He also highlighted Government’s plans for investment in infrastructure to improve access and connectivity within Region Three. These include the new Demerara River Bridge, the new Parika to Schoonord Road, the Parika to Goshen Road, and the new Sand Hills to Makouria road.

Meanwhile, according to the GYSBI, since August 2020, after the company had obtained numerous construction permits held in limbo, it has been able to accelerate construction to expand its facilities, with 30 acres of additional space developed and multiple warehouses and operational areas set up to the tune of almost US$50M. Already, this has created 140 new, permanent jobs for Guyanese.

GYSBI noted, too, that it now has about 470 Guyanese on permanent employment, and, over the next six months, will be looking to fill some 150 jobs for its next wave of expansion.

A young lady being interviewed at the fair on Sunday

GCCI lobbies for Guyanese to enjoy Visa-free travel to England

GYSBI noted that, as it develops its Oil & Gas Industrial Park, located strategically across from its shore base, this will become a Centre of Excellence and Opportunity for Guyanese wanting to work in the industry.

GYSBI, competing as a local company, has stated its intention to employ at least 97% local staff for upcoming tenders from the oil and gas operators and major companies to fill out the Industrial Park.

“90% of GYSBI’s contractors and suppliers are Guyanese, ensuring that locally- generated wealth not only stays in Guyana, but reaches a diverse group of small, medium, and large companies,” the company indicated.

Even as he applauded GYSBI for holding the event, Minister Singh urged the company to consider hosting similar events in all three counties of Guyana, and called on other companies operating in the oil and gas sector and in the broader Private Sector to conduct similar activities. 320 persons were interviewed today at Uitvlugt, while it is estimated that over 750 persons attended Saturday’s event at the Guyana National Stadium. GYSBI is holding a similar event on October 16 at the Enmore Martyrs Monument Ground.