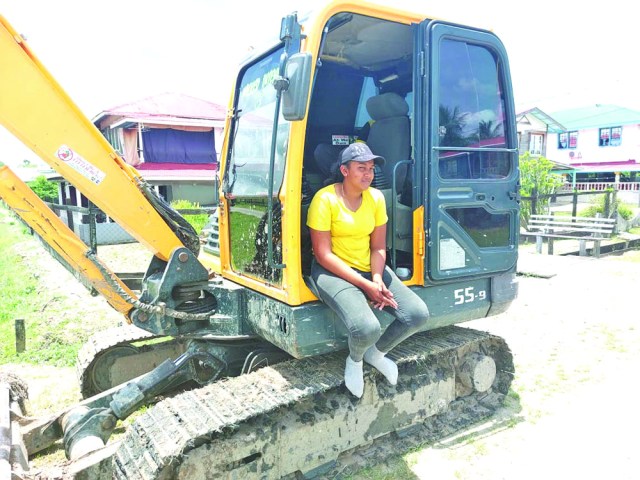 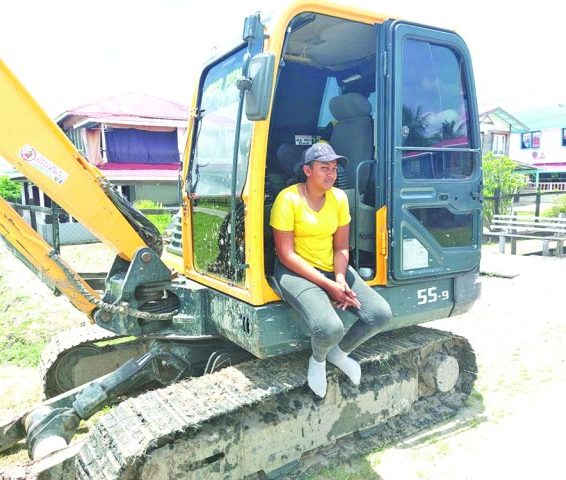 Many people assume that operating heavy construction equipment is a man’s job. After all, these are big, powerful machines. Grease on the hands, mud-caked boots and the smell of diesel are just part of the job. Some may say, “No place for women’.

It is not very often you find teenagers interested in operating heavy-duty machines. It is also uncommon to find females doing that job.

However, a 19-year-old Berbice girl has defied the odds and has the skills to operate heavy-duty machines from which she makes a living.

Kricshama Singh of Block 1 Blairmont Settlement, West Bank Berbice, Region Five (Mahaica-Berbice), was exposed to automobiles at a tender age and then through the Ministry of Agriculture, she got a break and took full advantage of it.

“I grew up in an environment where I dealt with machinery because my brother is a mechanic and I would be around him most of the time so I got involved in these things. I was given the opportunity at NDIA [National Drainage and Irrigation Authority] so I am very thankful to have started a career as an operator.”

She explained that the first thing she started to do was servicing machines.

“…the basic things as in fuelling up, wash, greasing and maintaining.”

She did that for about four months until one day she was allowed to get into the machine and turn it on to see if she could manoeuvre with. The teenager took the opportunity with both hands and showed off her skills which no one knew she possessed.

From that day, she has been officially working as a heavy-duty machine operator.

For young Singh, despite the challenges of being young and also a female in the field, her main focus is to improve the lives of persons.

When we met Singh, she was working at Blairmont, West Bank Berbice, on the drainage system. She said that based on how she does, her work would determine how the community benefits from her efforts.

“On a daily basis you encounter challenges but for me, doing community work and seeing development within the community that makes me happy and gives me a daily motivation to do what I am doing.”

Meanwhile, among excavator operators, 4.9 per cent of them are women compared to 90.1 per cent which are men. This is according to a survey done by Zappa on jobs in the United States.

However, some local analysts say the figures in Guyana may not differ much.

In the United States, female operators earn 83¢ for every $1 earned by men. 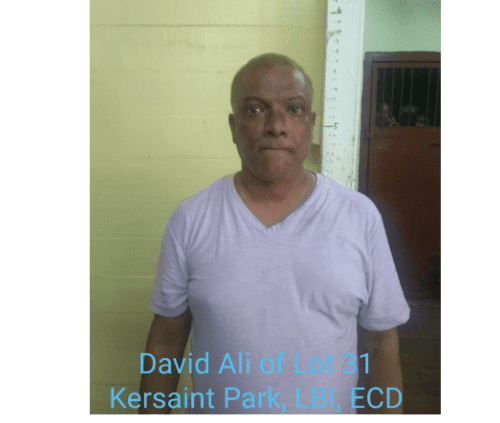 Training Director for the International Union of Operating Engineers, Steve Brown, when asked what advantage women have as heavy equipment operators by Tom Jackson of Equipment World, is quoted as saying, “All women want is a fair shake when they get to a job site and to be treated just like the rest of the crew”.

“Give them that and you’ll be surprised at what you’ll get from them, work-wise,” he added.

It has been about nine months since Singh was given the opportunity by the National Drainage and Irrigation Authority to assist with community development and enhancement.

She is encouraging other females not to be intimated by jobs that seem to have a gender preference.

“You would hear all sorts of things but you have to put aside your pride and do what makes you comfortable.

Operating an excavator, Singh told this publication, is not a ‘man’s job’.

“What a man can do a woman can do – gender equality,” she outlined.