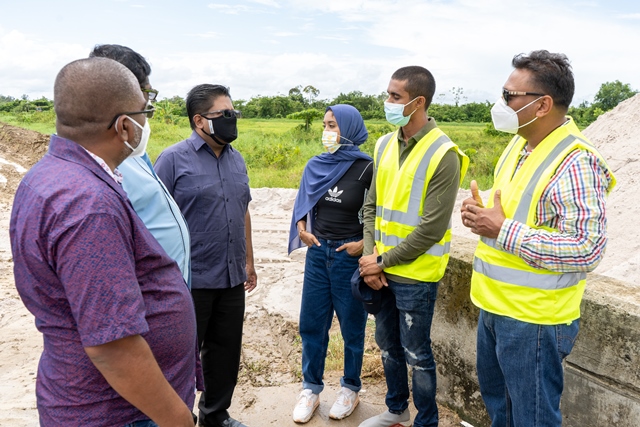 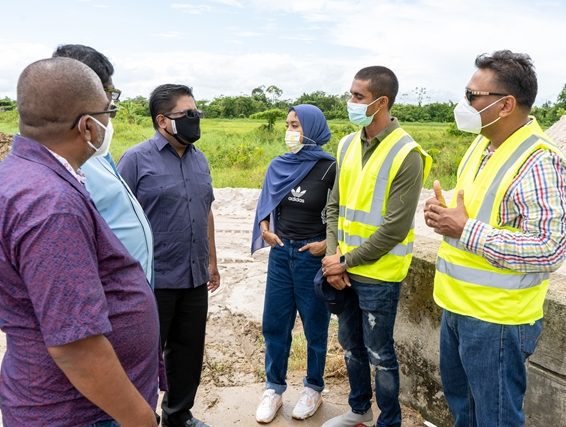 1 month ago·2 min read
ShareTweetPinShare
Home
Local News
Farmers to soon access 50,000 acres of prime farmlands in Region Six
The content originally appeared on: INews Guyana
Senior Minister in the Office of the President with responsibility for Finance, Dr. Ashni Singh converses with contractors at one of the work sites.

The ongoing construction of two major roads at Numbers 52 and 58 villages Corentyne, Berbice, will give farmers access to 50,000 acres of prime farmlands.

When completed, farmers will benefit from a high quality asphaltic thoroughfare, which will allow them to save time when transporting their produce to the markets. They will also spend less on repairing their vehicles, and eventually invest more to expand their cultivation.

Senior Minister in the Office of the President with responsibility for Finance, Dr. Ashni Singh said the two projects undertaken by the government, is a result of an engagement President, Dr. Irfaan Ali and the regional authorities had with stakeholders.

On Saturday, Dr. Singh led a team including Regional Chairman, David Armogan; Vice-Chairman, Zamal Hussain; and Regional Executive Officer, Narindra Persaud, to assess the progress of works at the locations.

“These two projects are going to play an extremely critical role in opening up new lands for agriculture cultivation. As you can see work has started. Our position is that we would like all of the contracts that have been awarded progress swiftly and on schedule and in keeping in line with specification.”

Dr. Singh said government is aware that access to good quality lands is one of the main constraints to rapid expansions in agriculture.

“As you know historically, Region Six had been a region known for the productivity of its agriculture land. These are land that have been historically extremely productive from an agriculture standpoint.

The government’s position at the highest level of the President and the Cabinet is that all of these contracts that have been awarded, must progress swiftly and on schedule and in keeping in line with specification,” the senior minister added.

Dr. Singh also reminded the contractors on site that it is important for the pace of works to be maintained. Cognisant that December is a rainy season, the minister urged contractors to utilise more of the dry season to accelerate the works.

“Because of course you know the government has a very aggressive programme for infrastructural transformation that we have outlined in our manifesto. There is a lot of capacity that has already been built up in the domestic contracting industry and we anticipate even more buildups of capacity going forward,” Dr. Singh assured.

Mr. Abdol Karim Rahim and Ms. Wendy Degroot are among the residents there, who cannot wait to traverse the new throughfare.

Rahim expressed, “I am so glad to see that the road work is going on now. It is a very good for us inside of here. We have water already; we need light and this access road to travel.”

As for Degroot, she is happy that her child can now have a smooth surface to travel to and from school. She said with the new road, she can also go to the market regularly, while there will be easy access to the hospital in case of an emergency.

Dr. Singh said all the projects are in the first phase and are among many other road initiatives streamlined for the county. [Extracted and Modified from DPI]