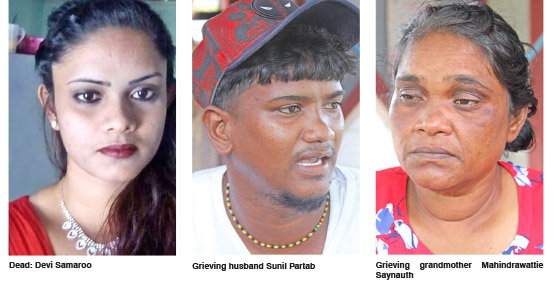 A newborn baby and her mother died hours apart at the New Amsterdam Hospital.
Dead is Devi Samaroo, 24, of Bloomfield, Corentyne, Region Six (East Berbice-Corentyne), and her baby.

The woman was admitted as a patient at the region’s premier health facility on Friday, gave birth on Saturday and was told that the baby died. However much to the family’s shock when they went to visit on Sunday morning, they were informed that the mother also died.

Samaroo’s husband, Sunil Partab, 28, a barber from Bloomfield village, said that he is awaiting answers from the hospital as information has been piecemeal.

A release from the Regional Health Services on Sunday said Samaroo received her antenatal care at the Whim Health Centre and was admitted as a patient at the New Amsterdam Hospital on October 29. The release stated that on Saturday morning, Samaroo delivered a preterm infant.

According to the release, an investigation has commenced and health officials in the region are awaiting the post-mortem results.

“The management and staff of the New Amsterdam Regional Hospital are deeply saddened by this event and express our deepest condolences to the family and friends of the deceased,” the release said.

Speaking with the media on Sunday, the woman’s husband said that her tentative due date was November 2.

Recounting the sequence of events following the birth of the couple’s second child, Partab said he and his mother-in-law visited the hospital on Saturday morning to see the newborn but were told that they could not see the infant at that time.

“When me go me ask them if me can talk to Devi Samaroo, them say no me cannot talk to her, a nurse told me that. So we deh deh because them not allowing me nor me mother-in-law to go in.

He said there was no information forthcoming and when they tried to inquire and have a doctor provide them with information about what was happening, they were told by nurses that they were instructed not to give any information.

Not getting any assistance from the nurses, the barber said he and his mother-in-law turned to the porters and security guards on duty for assistance and were allowed to see the infant, who was at the time in the mortuary.

Upon an examination of the body, Partab claimed that he saw a spot of faeces on the napkin, which confirmed his suspicions that his daughter was born alive.

Meanwhile, when the dead baby’s father and grandmother along with other relatives went to the hospital on Sunday morning, they were told that Samaroo had also passed away earlier in the morning.

He told this publication that there was again no information forthcoming from medical personnel.
According to Partab, after being informed of the second death, he was allowed to see his wife’s body, which was still in the ward.

He explained that it was covered with a sheet and when he lifted the sheet, his wife was naked.
“They did not put on clothes on her,” he said in a low tone.

“Me child dead, me wife dead, me and me daughter alone left. Fuh grow up without a mother now is very hard,” the young man lamented.

Meanwhile, Samaroo’s mother, Mahindrawattie Saynauth, could not hold back her tears as she recounted the difficulty she experienced trying to get information on the two deaths.

The mother of four said she was eagerly looking forward to the birth of her third grandchild.

“When me hear that me grandchild died, me feel very bad, me can’t move,” the tearful woman said, adding that she was numb when she heard her daughter also died.

Meanwhile, family members are calling for a thorough investigation into the deaths.

On March 3, Shanti Devi Suku of Letter Kenny, Corentyne, delivered her baby at the New Amsterdam Hospital at about noon and hours later she was told that she had a stillbirth.

It was on February 27 that 31-year-old Vanessa Lewis-Sahadeo of Williamsburg died hours after her newborn. She had also given birth at the New Amsterdam Hospital.