Well, all who thought that with the fighting going on all the way up in Europe, we wouldn’t be affected, wasted a thought, didn’t they?? It was five hundred years in the making but it’s almost there – globalisation making us into a global village, that is!! And we’re all connected and now all consumed!! We were there from the beginning, weren’t we? Yep…little old us in this backwater called the Caribbean!!

But we weren’t always a backwater. Was a time when our sugar was the most valuable commodity in the world – and wars were fought over us! In fact, most of what the tourists gawk about in Europe nowadays was built on the blood, sweat and tears of our forefathers and mothers! With the travails of GuySuCo nowadays, you’d never think so, would you?? Oh…how the mighty has fallen!! But from the wealth generated, the Europeans expanded their navies and conquered the world. Their exploitation was raised to heights from which they still haven’t come down!! And tied the world across land, sea and air with their logistical marvels that saw us in little Guyana, enjoying grapes from Chile, salmon from Alaska, clothes from Bangladesh, every kitchen device and whatever you can conceive of from China – not to mention cars from Japan and iPads from Taiwan. You get the idea, don’t you?

And to bring the point home – wheat for our flour from Ukraine and Russia that makes the bread of life! Between the two of them they produce 14 per cent of the world’s wheat supply, but more importantly, export ONE QUARTER of imports!! Meaning most of what we mill into flour to eat. And when that’s interrupted, it creates a chain reaction that filters into so many other supply chains that were disrupted by COVID!!

According to the UN, the loss of trading in basic commodities due to the war has resulted in astronomic food prices. Not to mention uncertainty about the future of food security globally – especially in us poorer countries. But not sparing the obscenely rich ones. For once in their lives they’re seeing their supermarket shelves running empty and not certain when they’ll be replenished! Your Eyewitness doesn’t like to gloat, but he does enjoy that frisson of schadenfreude as those who were above these matters because of their past exploitation now experience how the other half (the bottom half) lives!! The UN’s Food and Agriculture Organisation Food Price Index has made its biggest jump since its inception in 1990, reflecting an all-time high in the cost of vegetable oils, cereals, and meat!
We’ll have to back Pres Ali to get back to the land and become that food basket!

…they get hurt too!

But don’t think for a while the rich countries are the only ones being hit in their stomach with food shortages and in their wallets by higher prices. This Ukraine war’s speeding up a process that’s been in train for three decades or more. This threatens a complete reorganisation in the world order that we’ve become used to. One in which the US has been the sole superpower standing, following the collapse of the USSR in 1989.

The war has caused a realignment along “sides” – which everyone thought had disappeared after the fall of the Berlin Wall. Now we see China, India, most of Africa and so many other countries not outrightly condemning Russia for its invasion. They’re hedging their bets and that’s not good news for our ally, the US. Yesterday, their Treasury Secretary met with the IMF, World Bank, Group of Seven and Group of 20 global organisations to address the food and inflation crisis. 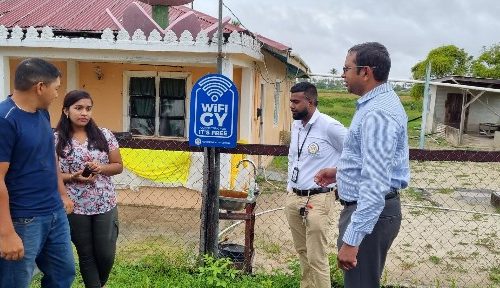 If there’s no relief, expect more desertions. And realignments!

Imagine someone thought the thing to do between Good Friday and Holy Sunday/Easter Monday was to invite Dexta Daps to perform at our National Stadium!!
This Jamaican Dancehall star’s oeuvre just BEGINS with “bloodclaat”!! Oh tempora! Oh mores!!