Eyewitness: What’s in a name…when it’s a “slave name”

Over in TT, a fierce fight has broken out over “name-calling”. And no…it’s not in some schoolyard scrimmage where the kids may retort “sticks and stones may break my bones but words can never hurt me”!! It’s between Kamla and Camille – past Prime Minister and present Opposition Leader Kamla Persad Bissessar and Minister of Planning and Development Camille Robinson-Regis.

At a PNM meeting on May 26, Camille called out at least three times, “Ka-mi-la Su-shi-la Persad Beast-ass-ar”. The deliberate mispronunciation – plus revealing to a surprised nation that Kamala’s middle was Sushila-invoked the old trope of Indian names being “unpronounceable”. And this 177 years after Indian arrival was just commemorated on May 30!! The subtext, of course, was Indians being “coolies” it wasn’t worth the while of “real” Trinidadians to learn to their pronounciation!! There is the lingering scorn.

Well, Kamla fell for the “crank up” and in one of her party’s meetings, hit back: “What problem you have with my name? What’s wrong with my name? Camille, at least I have the name of my ancestors. Where you got yours from? Your name is that of a slave master.” Well, who told her to say that?? It brought down a firestorm all over the island with PNMites insisting that Kamla was “racist”. The point is, both of them were very insensitive to the fact that they were living in a multi-racial society in which such name-calling brings up a past that’s fraught with slights and hurts and worse.

Technically Kamla isn’t incorrect. As Malcolm X once pointed out, “The slave master who owned us put his last name on us to denote that we were his property. So, when you see a negro today who’s named Johnson, if you go back in his history you will find that his grandfather, or one of his forefathers, was owned by a white man who was named Johnson. My father didn’t know his last name. My father got his last name from his grandfather, and his grandfather got it from his grandfather, who got it from the slave master. The real names of our people were destroyed during slavery.” But that’s not the point, is it?
Similarly, Camille should’ve been more sensitive to the sentiments of mocking an Indian name – especially just before Indian Arrival Day. That’s when Indians would’ve been reflecting on their travails during and after Indentureship when the Creole culture into which they’d been dumped scorned and derided them as “uncivilized” and worse.
Your Eyewitness hopes that in our dear Guyana, leaders and followers would be attuned to the implications of name-calling.

…on a personal level

But we did have our own firestorm over name-calling right here in Guyana, didn’t we? Charges were brought by now ex-Policewoman Shawnette Bollers against young attorney Nirvan Singh for (according to her) calling her a “black monkey” and spitting on her. Retorting that he merely yelled at her for being disrespectful to his mother, he denied the allegation. But the firestorm didn’t end there. 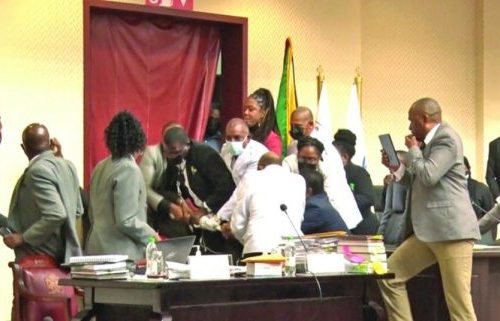 Letter: What is the status of those who disrupted Parliament session?

Bollers’ lawyer filed a charge as defined by the Racial Hostility Act – which meant that Singh would’ve uttered the words in a public space to willfully excite, or attempt to excite, hostility and ill-will against her on the ground of her race as an Afro-Guyanese, the words being directed to her and published by him. Now when the DPP said the facts as described didn’t satisfy the criteria…she was denounced as “taking sides”!
But now a new charge was filed against Nirvan for “assault”.
This should go forward. So, let’s see if anyone will apologize to the DPP.

…In the Castle of my Skin

George Lamming, who wrote that seminal Bildungsroman of our Caribbean people, is now gone. We in Guyana should never forget him for also writing the preface to Rodney’s great “History of the Guyanese Working People”.