Our President Ali just had a meeting with British PM Boris Johnson, while he (Ali) was in London to court British investors. Back in the (colonial) day, there was a West India lobby that touted investments into our sugar-dominated economy, which were invariably backstopped by the colonial government!! But today, our political leaders have to beat our own bushes, so it’s a good thing our newfound oil might be seen as a modern day back-stopper!!

Anyhow, there was President Ali, hobnobbing with Boris at 11 Downing – sharing drinks and posing for pics in the drawing room. Sign of the times, no? Was a time when our leaders weren’t even given the time of the day from British PMs. Save for when they might be suspending our constitution and ousting elected governments (Churchill in 1953), or conspiring with the Yanks for a repeat performance a decade later (Macmillan and Kennedy in 1960s). But both Britain and our fortunes have since changed.

Johnson comes across as a long-in-the-tooth party frat boy – and not only because of his carefully tousled hair!! Once a journalist, and then Mayor of London, he just can’t seem to shake his predilection for having a good time! For months, he’s been trying to ride out the national scandal of him partying in and out of 11 Downing during the COVID lockdown. While the masses were busted for much less infractions. That hasn’t gone away, but the Russian invasion of Ukraine gave him a godsent opportunity to deflect the national attention!!

He’s seized it with both hands, and has become the most hawkish “saving” the Ukrainians from Putin! The irony that his Brexit “master stroke” pandered to rising British nativism against “furriners” like those same Ukrainians is lost. And what’s the downside of fighting the Ruskies in another country – without sending any of his countrymen, as in WWI and WWII?? It’s a win-win all around – especially when some of the weapons supplied to Ukraine will be manufactured by British firms!!

Anyhow, if you look behind Boris and Irfaan (first names seem to be natural for these two leaders!) pic, you’ll see a portrait of the ultra-imperialist and ex-British PM Winston Churchill. He just happens to be the great hero of Boris, who’s done his darnedest to imitate him. Boris seems not to mind WWIII being precipitated in Ukraine, since this would just burnish his Churchillian credentials! He knows his subject well – having written a bio, The Churchill Factor.

As such, Boris is a journalist, writer, heavy drinker, dropping bon-mots, and even occasionally chomping on a cigar!! He just visited India to smooch Modi.
Is cultivating Ali part of the plan??

A report was just released by a UN agency and Caricom, declaring that “food insecurity” has increased in the “English-speaking Caribbean”. “Food insecurity”, we’re informed, is “the state of being without reliable access to a sufficient quantity of affordable, nutritious food.” The report includes Guyana, but your Eyewitness wishes the figures had been disaggregated. Not that he doesn’t believe there are Guyanese who might be experiencing this condition, but he really doesn’t think it’s too widespread. 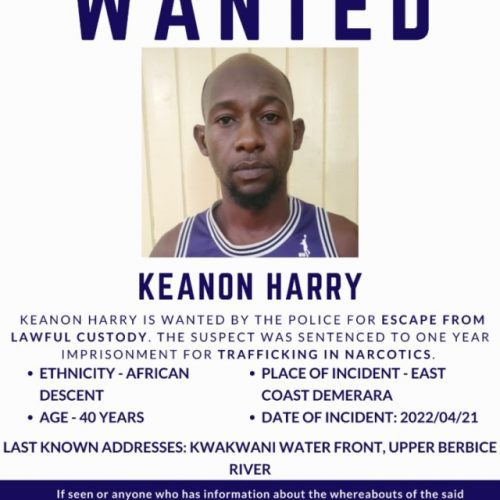 Overall, we’ve been classified as a “food secure” nation, so it’s possible we may have a distribution rather than a production problem. The Government has taken a stab at addressing this condition with its facilitation of “Farmers Markets” at various locations across the country. By cutting out the middlemen, the prices to consumers should be lower. Another contributory factor is the disappearance of “kitchen gardens”. This used to be a standard practice not so long ago.

But today, everyone wants to shop in supermarkets – even for vegetables which everybody used to produce!!

The report said, “30% of respondents skipped meals or ate less than usual, and 5% went an entire day without eating in the week leading up to the survey.”
Was this survey conducted during the Lent, Navratri, Ramadan period?