Well, it’s clear our political leaders can’t settle their differences on their own accord – with almost every issue that crops up. Your Eyewitness knows that, in our adversarial politics, the Leader of the Opposition (LoO) is supposed to oppose the Government (duh!!). But jeez, isn’t there a limit, so SOME business of the state can proceed?? When does opposition become intransigence??

So, the LoO went to the Courts – perpetuating the “judicialization of politics”. And risks dragging our constitutional arbiter into the gutter by imputing POLITICAL motives for their JUDICIAL decisions!! Take the just-delivered decision by the Chief Justice (ag) on whether the President’s appointments to the Police Service Commission (PoSC) and the Integrity Commission were illegal – as claimed by the LoO. And, inter alia, whether the appointments made by the said PoSC weren’t also consequently illegal!!

Your Eyewitness must confess that even after reading three different accounts of the CJ’s decision three times each, his head’s still spinning!! Not the least because both the Police Service Commission and the Public Service Commission had the same acronym (PSC) – explaining why yours truly dubbed the former “PoSC”!! It’s a good thing the Private Sector Commission (also PSC!) wasn’t dragged into the matter.

The entire case turned on whether there were the constitutionally mandated “meaningful consultations” between Pressie and the LoO before these Commissions were constituted. On the matter of LoO Norton’s contention of “no consultation”, the CJ said “Not so!!” The clincher was that even after the clarifications on Pressie’s nominations were given to him, if he needed additional info, he’d unilaterally decided he wasn’t gonna be doing no meeting!! The President should be psychic??

But that wasn’t the END of the story. Is there ever?? Seems that even though the Integrity Commission and its Chair was a done legal deal, the appointments by the PoSC weren’t!! While the appointment of the CHAIR was legit, before he could consult his Committee to make recommendations for appointments, an ex-officio member of the PoSC – the Chairman of the Public Service Commission – had to be there!! And trouble was – BIG trouble! – there’s wasn’t any Chairman of the PSC!!

So, does this mean that the appointment of the entire GPF top brass – the real cause of this fight!!! – is illegal?? Well, YES IT IS!! But does this mean that COP Hicken has to go?? Well…NO!! “Well, how come?” you ask, dear reader?? The CJ (ag) pulled out a rabbit from her legal hat (used to be a powdered wig!!). She invoked the “de facto doctrine” which your Eyewitness calls the “boat gaan a watah” doctrine!! To revoke the appointment would result in a “failure of public justice”!!This ain’t over till it’s over!! Or some fat lady sings!! 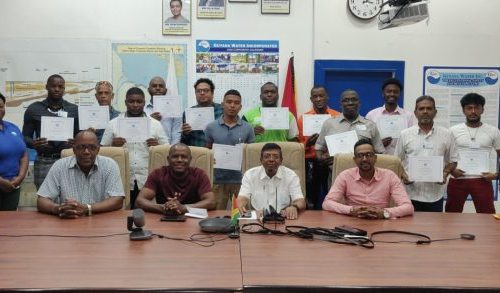 …or creating conflicts??The LoO also drew a line in the sand – demanding that GECOM’s gotta create a new voters’ list, or else!! He didn’t ACTUALLY SAY “big trouble”, but the WAY he said it left nothing in doubt, least of all, PNC’s supporters!! Now ostensibly, the LoO’s contention looks reasonable: Guyana has a population of 740,000, so how come the voters’ list has 684,354 names – over 91 per cent of the population.

But, in August 2019, the High Court ruled new house-to-house registration meant a “residency requirement” for voting!! Unconstitutional!! Once a person’s registered to vote, their name can’t be removed, even if they’re overseas or not found at the address where they registered. Most of the alleged “bloating” comes from Guyanese citizens migrating.The Coalition Government had appealed this decision, and on 11 Feb 2020, the Court of Appeal upheld the August 2019 High Court decision.To remove persons’ names from the list, there’s gotta be an amendment to the Constitution, outlawing dual citizenship!!