A couple of weeks ago, the International Republican Institute (IRI) announced the results of a poll in our country conducted back in January. The IRI, Dear Reader, was the group that took such a great interest in our politics that just before the 2011 elections, it spawned a host of “civil society” groups like the Red Caps and also the “Vote like a Boss” to assist “voters’ education” during the elections. They sure had an “educational” impact since the PPP was effectively checkmated to be removed in 2015!!

They were formed in the early 1980s after Reagan announced that America had to export “democracy” abroad. John McCain was its head for some 25 years!! It’s mostly staffed by Republicans while their compatriot Democrats have their National Democratic Institute that also only works abroad from their HQs in Washington. The local US politics is already quite democratic, thank you!! You heard about all those “coloured” democratic revolutions all across the world including the “orange” one in Ukraine?? Well, these two groups played quite a big role, but are too modest to boast about it!!

Anyhow, since our democracy isn’t that entrenched – the British tutoring for 100+ years on democracy’s nuances wasn’t enough! – the IRI continued carrying out its burden here. And this brings us to the above-mentioned poll. They brought in a group from Costa Rica called CID Gallup even though it has no connection to the famous US Gallup!!

The PNC’s new Opposition Leader Aubrey Norton – and camp followers – responded first since the “findings” seem to support some of their claims about the elections. Especially about their concerns about the “integrity of the electoral system”. For instance, it claims that 64% of the population “agree that there’s a problem with ethnic or racial discrimination of voters during elections”. How that discrimination occurs wasn’t explained!
The other response was from PPP’s Gail Teixeira who claimed that the poll was very highly flawed for quite a number of reasons. From where your Eyewitness sits, the major one was the IRI admitting that of their 1500 respondents identified to give an ethnic, regional, gender, and other balances, they only had a 20% response! Now, how the heck can those 300 persons be representative since there is no way in hell they could’ve self-selected randomly to match the original representativeness!!

Another more fatal problem was the type of questions posed. How many Guyanese could answer, “To what degree can legislative reforms successfully address weaknesses in the current system?” Then if 81% voted, why would 69% want new parties? And 29% — 100 of the 300 who chose to respond – were not eligible to vote?

Many in the West breathed a sigh of relief that in the just-concluded French elections, incumbent President Emmanuel Macron secured 58% of the vote to beat the right-wing challenger Marine Le Pen. But what’s critical to note is there was only a 63% turnout in a system where there’s a first round that winnows out all other competitors. Meaning that Macron’s support isn’t that solid, as for many, he was “the lesser of two evils”! 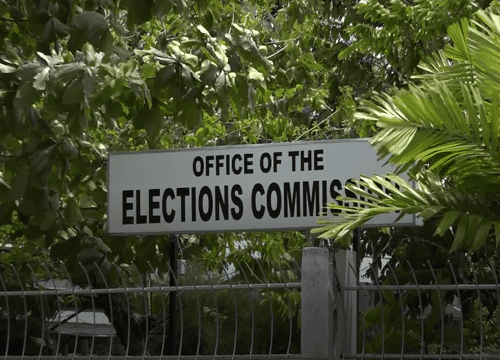 But more to the point, Le Pen, whose platform played on the nativist and anti-immigrant fears that have swept the West, picked up more votes than she did in 2017. It isn’t ironic Brexit was precipitated by Poles and Ukrainians flooding Britain? And in the end, her right-wing philosophy really won since Macron had to shift in that direction to stave off defeat. The rightists are now setting the agenda as in the UK, US, Brazil and in most European countries!!
Expect this trend to continue and immigrants to feel more unwelcome up north!

Rather than just kvetching about having no power, your Eyewitness has been pushing the Opposition to use mechanisms in place to influence Government policy.
Yet we just heard they’ve not been attending meetings of the Constitutional Reform Committee!!