Some might’ve thought that Pres Ali’s “Silica City” announcement two years ago was just a gimmick. But it should now be clear that unlike Burnham – who talked about having a new city on higher ground in the then North West District – this president isn’t just full of ideas like the departed dictator. Ali isn’t a “talk man” like his predecessor, but a “do man”!! It appears that Pres Ali has long nurtured this dream – since 2013 when he was Minister of Housing, to be exact. Maybe that’s the reason he did his PhD dissertation at UWI on urban planning?? And now that he’s got the authority to make his dream a reality he’s going full steam ahead!! Silica City here we come!!!

Now, there’s many reasons why Ali’s locational choice is so appropriate. First of all, there’s the question of practicality: which investors and pioneers were going to move all the way to the now Region 1 to set up a new city?? Jim Jones II?? Hasn’t the Government been trying with Mabaruma for the longest while? Let’s face it – that idea wasn’t sustainable – like most of Burnham’s big ideas – and that’s why it never got off the ground – pun intended!! The time will come for Reg 1 to have its city – but not now!!

So what makes Silica City right – apart from its alliterative ease on the tongue!? Well, it’s far from the madding crowd (and stench!) of Georgetown, but being near CJIA, it’s actually as close as you can get to the international investment crowd we’re trying to attract into our country!! And with the Highway to Lethem soon to be completed, it’s closer to both Linden and that behemoth in our south – Brazil – to which we’ll be strengthening our trading links!! Silica City’s also gonna be closer to the Intermediate Savannahs where we’re diversifying our agricultural base away from sugar and rice!!

The President just reiterated the incentives that are available for “pioneers” as we begin to “bust open” our interior!! Now your Eyewitness feels we gotta speak frankly to those who’ll soon be hollering “discrimination!!” when Silica City’s off and running. Let them apply NOW for housing or business – or whatever – permits!! And if they don’t, too late shall be the cry!! Linden with its Opposition supporters are in the best position to take advantage of this opportunity – and the PNC should encourage and organise this initiative!!But your Eyewitness has a suggestion for Pres Ali. Why not move the Government’s administrative infrastructure to Silica City. That’s what Brazil did when they created Brasilia in the middle of the Amazon during the 1960s!!What can you lose but the power to be crippled by strikes??!!

Your Eyewitness is from the generation that remembers when the Pegasus (the “Peg” to insiders, thank you!!) was the pride of the GT crowd!! Hanging out at poolside, wolfing down hors d’oeuvre as discreetly as possible – while quaffing some cold Banks with Sly and the Family Stones crooning in the background – was the height of cool!! Anyhow, time and tide wait for no man – and evidently no hotel!! The edifice, where Elizabeth II had slept (Is there a sign “Lizzie slept here” in the room??) fell on hard times. 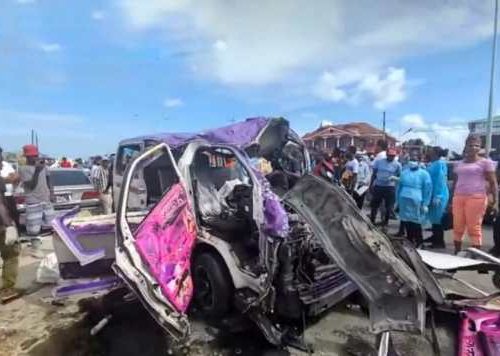 But seems like the Pegasus is rising like the Phoenix from the ashes – and is about to regain bragging rights as “the best ole huh-tel in Guyana”!! Your Eyewitness just saw the announcement of a rather posh restaurant going up at the ground floor of the massive, black-rock modern that now complements the still distinctive, avant-garde polygonal structure that was the Peg. He can’t wait for the opening!!Can he recapture some of that ole time feelin’?!!

A clip of a stadium of Irish football fans singing “Lizzie in a box” to the tune of KC and the Sunshine Band’s hit song, “Give It Up” went viral upon hearing of the passing of Queen Elizabeth.