EYEWITNESS: Chances… and Opposition’s taking them

That’s progress, ain’t it?? After all, since Aug 2 2020, the same Opposition and their supporters and enablers from New York to Timbuktu have been cussing out the same diplomats as the very essence of “stink and dutty” for their role in and after the March 2 elections!!

Following their “regime change” script, they were the ones responsible for “the illegally-installed cabal” – said so often that by now it’s pronounced practically as one word!! – that’s been running (and ruining!) Guyana for the last two years!! And are now constructing that “emerging apartheid state” we’ve been hearing about!!

US Ambassador Sara-Ann Lynch in particular has come in for the bulk of the cuss-out “cuss down”? And there have even been strident demands made on the Biden Administration to have her fired!! And in case you wondered what pressure they could bring to bear of the US Government, they point to Congressman Hakeem Jeffries of the Congressional Black Caucus. Seems he frequents the SDA Church of one PNC supporter, even though he’s a Baptist!! But that’s all in the family, aint it? And for sure, he’s a brother!!

Since they were meeting at PNC’s Congress Place HQ, did Norton stretch out his hand to shake Sara-Ann’s?? Did she accept?? As we know, Norton lays great store on handshakes, and since the pic shows one and all smiling, your Eyewitness figures “all protocols were observed”!! In diplomatese, that covers a host of sins!!

So, what’d they talk about?? Did Sara-Ann ask Norton why they’ve been witch-hunting her?? Did Norton say, as Jagdeo reportedly told Vincent Alexander, “That’s just politics”? Unlike Alexander, did Sara-Ann say, “That’s okay??” Anyhow, it’s reported that elections and the voters list was raised by Norton and Ramjattan, GASP!!!! After all the cuss out at “western interference” in our elections, are these gentlemen suggesting that they “interfere” again?? What the heck’s going on?? So electoral interference (or blind eye on behalf of the PNC’s good – like between 1964 and 1985 – is kosher?? What happened to “dis time nah lang time”??

Interestingly, the AFC showed up even after declaring they’ll be parting ways with APNU come Christmas!! Kissed and made up? 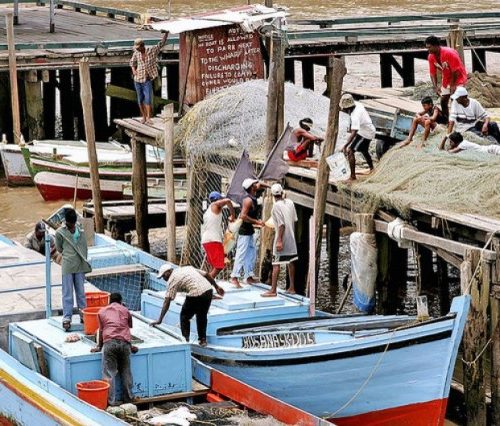 Tomorrow we’ll know for sure whether Sunak’s chances of becoming Britain’s PM were more than a snowflake’s chances of surviving in hell!! In a not-unrelated factoid, yesterday India surpassed Britain as the 5th largest economy in the world. When Britain conquered India, it was about the second largest – behind China. Britain not only drained that wealth to develop itself, but destroyed the Indian economy, that’s only now finally recovering. This is related to the 180,000 or so Conversative voters who’ve already made the decision – which just has to be announced!! Cause those 97% White Conservatives – with 44% over 65!! – are just the ones who remember fondly when “Britannia rules the waves – and the wogs!!”

And resent that those same wogs have the temerity to show up at Britain’s shore penniless and – within one generation – become richer than the Queen!! What does that say about themselves?? Wouldn’t Sunak-as-PM be a living indictment of their racial stereotypes??And now wanting to run the entire show?? Wot?!

…of “The Rings of Power”

Your Eyewitness gotta hand it to Tolkien. That carefully constructed, barely disguised myth placing the Brits at the centre of not just Earth – but all worlds and dimensions – could only come from an Imperial conceit!