“Apartheid” is the Afrikaans’ word for “apartness”, which became the official policy in South Africa after the National Party (NP) – the party of the Afrikaans – descended from Dutch settlers – became the Government. Basically, it ruled that Whites were superior to non-Whites – especially Africans. While the practice had been in place since SA became independent in 1913, a series of laws were enacted to ensure that people could be punished if they didn’t comply.

There are claims that an “apartheid” state’s being established here in Guyana – even though an African-backed Government (the PNC) received independence in 1964 and ruled until 1992!! They controlled the National Assembly – where laws are passed – between 2011 and 2015, and returned to office between 2015 and 2020. There was no talk of this Apartheid State being created during those periods, so this must’ve been initiated after the PPP returned to office in August 2020.

So, to discern whether we have creeping apartheid, your Eyewitness will enumerate some laws passed by the NP in the 1950s!! “The Population Registration Act” (1950), which relegated all South Africans to a particular racial group; “The Group Areas Act (1950), which defined residential and business areas for the sole use of particular race groups. This coordinated with forced removal. The Separate Amenities Act (1953) – members of different races couldn’t use the same public amenities; The Bantu Education Act (1953), which redefined the content and purpose of African (and Indian) schooling.

Other early apartheid legislation introduced sharp new curbs over the urban residential rights of Africans and rights as urban workers: The Native Labour (Settlement of Disputes) Act (1953) excluded African workers from the formal system of industrial relations; The Native Laws Amendment Act (1952) and Natives (Urban Areas) Amendment Act (1955) tightened the terms under which African men and women might legally live in urban areas; The Native Building Workers Act (1951) and Industrial Conciliation Act (1956) extended the operation of job colour bars and passes to women.

A further set of laws passed by the NP sought to restrict legally permissible forms of political behaviour and protest: The Criminal Law Amendment Act (1953) – a response to the 1952 Defiance Campaign – made it a criminal offence subject to heavy penalties to break any regulation “by way of protest, or in support of any campaign against any law; The Public Safety Act (1953) gave the Minister of Justice the power to declare a state of emergency during which the ordinary law of the country would be suspended. The Prohibition of Interdicts Act (1956) denied Africans the right to lodge interdicts and stop actions that may cause harm.And this was just in the 1950s!! Similar to today’s Guyana??

Your Eyewitness has been keeping you up-to-date with the elections in Kenya, since they had done everything – and then some that’s being suggested – to resolve their political impasse. Like us, free and fair elections were returned in 1992. They’ve tried power sharing with parties – and leaders; decentralisation; cultural policies; electoral reform; counting at the place of poll; POSTING OF EVERY SINGLE ONE of the 44000+ SoPs on the internet, so that everyone could check and add up votes themselves!! 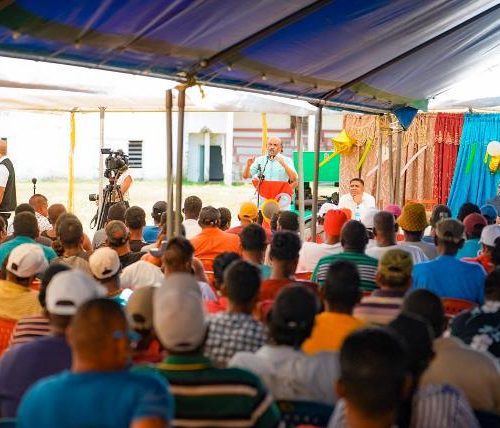 Distribution of $150,000 grant to fisherfolk continues along East Coast corridor

All of this took place after disputed elections in 2007 led to 1300 persons being killed in riots, and the Constitution was changed to allow the above innovations with the 2008 “National Accord and Reconciliation Act”. So, there were elections in 2013, then 2017. The latter was objected to, and was reversed by the Supreme Court, and new elections were held.Now that the 2022 elections were won by Ruto – the outsider – the insider, Odinga, has gone to the Courts!! No matter what system you have, it depends on the maturity of the leaders!!What to do??

…of cops and robbers?

All your Eyewitness can say about the revelations coming out of the Bascom affaire is that there’s definitely a fraternity of cops and robbers in Guyana.They know each other, and even hang out!!