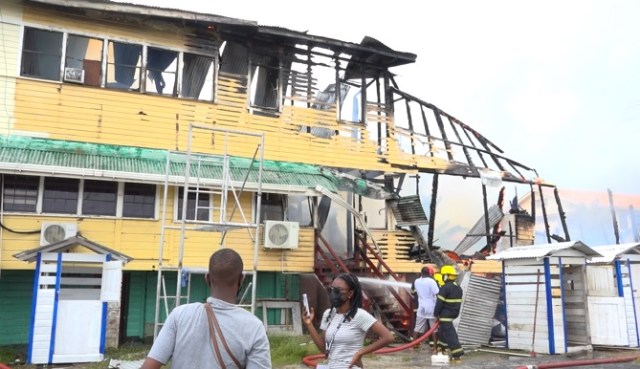 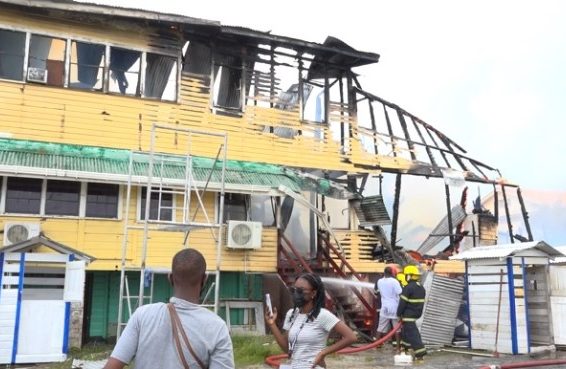 Several options are being explored with respect to relocating the Office of the Director of Public Prosecutions (DPP) which received minor damages following a fire to the wooden structure on Saturday. This was disclosed by Attorney General Anil Nandlall, during an interview with this publication on Sunday.

The AG related that there will be a public announcement as soon as plans are finalised.

At one point, staffers were seen throwing scores of files from the upper flat of the building outside. In the meantime, the DPP’s office will remain closed indefinitely “until we can sort ourselves out,” said its Communications Officer, Liz Rahaman.

When contacted on Sunday, Rahaman disclosed that all case files and criminal records were saved. However, a difficult task lies ahead; the office now has to reorganise hundreds of records. But this, according to Rahaman, will not affect cases that are pending before the Supreme Court of Judicature.

“Cases will not be affected in the High Court because ongoing matters in the High Court…the respective State Counsel will appear as per normal. So, cases will go on.” As it relates to matters before the Court of Appeal, she said, “If the Court of Appeal finds it necessary to give adjournments, it will. Notwithstanding, Rahaman said that the fire will “greatly affect” the day-to-day functions of the DPP’s office.

She added, “All of our files, everything is in storage right now for safekeeping. As of tomorrow (today), the DPP and her staff will commence sorting out all documents.

Because with the help of the Police Force, we were able to save all of our records, and thankfully the Police Force has made accommodation for all of our documents.”
Rahaman clarified that in the process of retrieving the documents, none of them were severely damaged.

Meanwhile, during an interview with reporters at the fire scene, DPP Shalimar Ali-Hack noted that the fire renews the urgent need to digitise records. “It is something I have been asking for, for years now, to digitise the system. This shows the wisdom in having a digitised system.”

“The DPP’s office was saved and we have been able to save the documents as well as the hard drives for the computers. Now, we thank God for that!” she said. According to her, many cases before the Magistrates’ Courts would have to be rescheduled until the office is back up and running.

Among the records kept there are those for matters for the Criminal Assizes in each county and cases being prosecuted by Police prosecutors before the Magistrates’ Courts. “It’s not just filing for ongoing matters but we have records for matters that are completed…It is a paper-based system so it is a lot of paper,” Ali-Hack explained.

Ali-Hack disclosed that the original files for electoral fraud cases involving a former APNU/AFC Government Minister, former top Guyana Elections Commission (GECOM) staffers, and others were not kept at the office. This newspaper understands that the files salvaged from the fire are being stored at the Police Force’s headquarters.

As it relates to the OPR, Police Commissioner Nigel Hoppie, who was also at the scene of the fire, related that there are systems in place to account for the files and other materials that were destroyed by the blaze. The OPR is the Police Force’s internal investigative unit.

After a massive Saturday fire destroyed the Brickdam Police Station in October, Nandlall announced plans to fully digitise Police records. The station had also housed the headquarters for Police A Division and the Court Superintendent’s Office.

While noting that the initiative is aimed at ensuring sufficient service delivery, he said, “We will soon donate to the Police Force a large complement of computers and printers, with express intention that they are to be used for the typing of statements which are to be used as the basis for prosecution in the courts across this country”.

The Attorney General noted that the fire would greatly delay progress in the criminal justice system, since most, if not all, documents that are related to criminal cases went up in flames.

Nandlall explained that each document would have to be reconstructed, and, if possible, would have to be borrowed from the Magistrates’ Courts. He said, too, this would be an expensive, time-consuming, and arduous task that will bring about injustice to those awaiting trial.