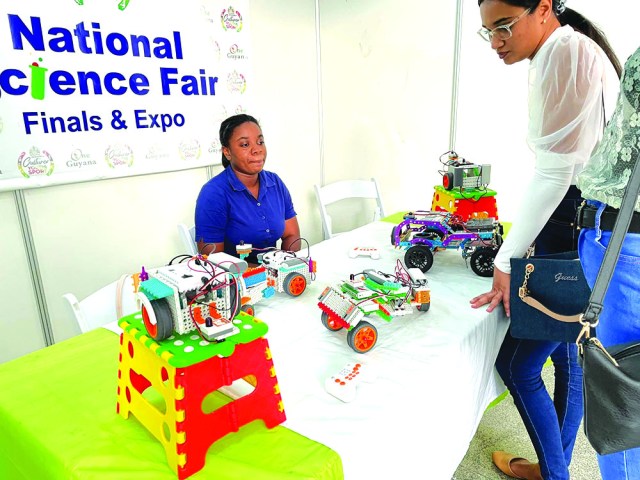 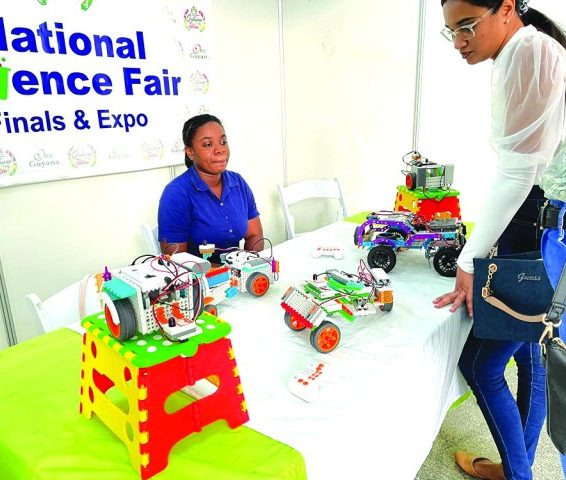 Capturing innovative and life-changing solutions for Guyana, youths from across the country converged on Saturday for the National Science Fair finals and expo, bringing together a plethora of brilliant concepts.

The Arthur Chung Conference Centre (ACCC) was transformed into a hub for creatives and school-aged children to bring their ideas alive, sparking attention on the impact these projects can have on the country.

The ACCC coming alive for the National Science Fair

From an eco-friendly absorber for oil spills to a river cleaning machine, a buzz was sure created from the science frenzy.

The Anna Regina Multilateral School displayed its “Multibrella”, an umbrella that can be used to trap sunlight and transform energy to conduct tasks. While providing shade like a normal umbrella, it was created with a section on top where food items can be cooked using solar cookers. There is another area that traps sunlight and creates solar energy.

Chasina Singh, one of the students, detailed, “You place the food inside of it and it cooks with the solar light. We also have a battery that is stored at the bottom in case of unfavourable weather. That will be used to operate a duplex point, which we can operate a microwave.”

Singh said this “multibrella” can be used anywhere. It would reduce the use of fossil fuel by bringing down cooking gas usage.

The Anna Regina Multilateral also created the Husky Husk Absorber, using coconut and rice waste to develop a fast absorber for oil spills. After it mops up the oil spill, the waste can be squeezed out of the material and it can be reused up to nine times.

“For many generations, waste from rice and coconuts has been dumped in various areas, which resulted in pollution. We combined these materials to make something absorb oil. Since Guyana is now an oil-producing nation, we are now prone to environmental threats, the most prevalent being oil spills,” explained Suria Walcott.

Over at Robolife GY, a river cleaning machine was mapped out to skim off accumulated waste materials from large water surfaces. It uses existing technology to create a ‘floating bin’. A conveyor system would remove the waste and dispose of it properly.

“In layman’s terms, it is a garbage bin on water. The first conveyor belt picks up the garbage from the water and then a second conveyor belt would drop it in the bins. The idea is to just make the environment better in terms of cleaner. We want Guyana to be a cleaner and better place,” Micheal Thomas shared.

Meanwhile, the University of Guyana’s Robotics Club brainstormed a semi-industrial robotic arm as they explored a locally made robotic kit for Guyanese students.

A member of the club, Carlos Benn outlined, “We have created the first semi-industrial robotic arm and it is produced for educational purposes. In our country, we mostly import everything and it goes into even robotics for the STEM kits. However, we’re thinking of a locally made robotics kit. In that way, you reduce production and shipping costs.”

Benn told this publication that they want to see these robotic arms in schools, where teachers can be trained to use them. In six months, the aim is to have 10 across every administrative region.

There is a sprinkler system, which uses water and calcium carbonate, to trap the harmful toxins before it can escape into the air. This produces a liquid that isn’t harmful and can be used to water plants among other activities.

Sara Reddock, a 15-year-old student, told this publication, “We don’t want any black smoke. So, we open the pipe, and the water travels. As the smoke goes up, the water traps it.”