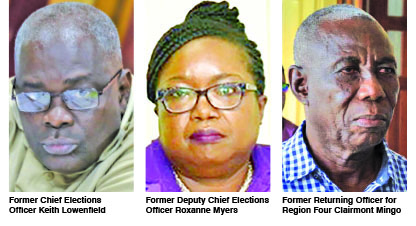 Electoral reform: Chief Elections Officer can be jailed for life for committing fraud

…others can face hefty fines or jail time for offences

An overhaul of the country’s electoral laws can see the Chief Elections Officer (CEO) at the Guyana Elections Commission (GECOM) facing as much as life imprisonment for committing fraud while others can similarly face hefty fines and jail time for any related offences.

Proposed changes to the Representation of the People Act (RoPA) were released to the public on Friday – just over a year after the unprecedented five-month-long election last year which was marred with instances of fraud and other electoral offences.

With hardcopies of these proposed amendments being delivered to key stakeholders like political parties, the Guyana Government has provided a six-week timeframe within which feedback will be accepted.

Minister of Parliamentary Affairs and Governance Gail Teixeira, in a statement to the media, explained that the objective of the amendments is to examine the process from registration to the declaration of the results, “so that every stage of the process is unambiguous and transparent”.

“This significant step in the electoral reform process is necessary to ensure Local Government, and General and Regional elections are conducted in a free, fair and transparent manner,” Teixeira posited.

For the purposes of elections, the country is divided into ten electoral districts (based on the administrative regions). Within each district, there are polling places where the electorate goes to physically cast their vote on a paper ballot.

At the close of poll for each polling place, the votes cast are tallied, then recorded in the Statements of Poll, after which, it is submitted to the person in charge of the district, namely, the Returning Officer who is responsible for preparing the “District Tabulation Form” and declaring the total votes recorded in favour of each contesting political party in the district.

The proposed changes envision that for the country’s largest electoral district, District Four (Region Four – Demerara-Mahaica), there be four subdistricts which will follow the same procedures outlined for the districts. The District Tabulation Form from each subdistrict would have to be submitted to the Returning Officer who is tasked with publicly declaring the votes recorded for each list of candidates for the overall district.

To remove any ambiguity in the process, the proposed amendments stipulate that the Returning Officers must display, using an electronic mechanism, each Statement of Poll for all the persons entitled to be present during the event including counting agents, political representatives, observers.

The Returning Officer must also provide the opportunity for objections from any duly appointed candidate or counting agent. Additionally, the Returning Officer shall not move on to display another Statement of Poll unless all the information required from the document currently being displayed is dealt with “to the satisfaction of every person present”.

These proposals are significant considering last year’s system whereby the Returning Officer for District Four Clairmont Mingo repeatedly called out and tallied numbers that were not reflected on the Statements of Poll in possession of stakeholders.

The draft updated electoral laws also outline a clear process for the request of a recount, including empowering the Chairman of GECOM to grant that request.
Under the proposed laws, the CEO must immediately post the District Tabulation Forms on the Commission’s website as soon as he receives them from the Returning Officers.

In this regard, if the CEO posts false statements on the website, he/she has committed an offence and can be fined $10 million as well as face life imprisonment. In fact, if the CEO fails altogether to make the copies available electronically via the GECOM’s website, he can be charged.

Another responsibility of the CEO is to prepare a final report on the nationwide votes which is to be submitted to the Elections Commission to declare the winner of the elections. If he fails to do this within the established timeframe or if he falsifies any of the data, he can also be jailed for life and fined as much as $10 million.

Other persons involved in the electoral process can face fines as high as $10 million and can equally be jailed for life if they breach any provisions as outlined in the proposed updated RoPA.

The amendments to the RoPA recommend life imprisonment for any person who fails to deliver to the CEO a true certified copy of a Tabulation Form or who delivers a Tabulation Form with falsified information.
The amended law stipulates that “a person who obstructs an assistant agent or an alternate polling agent in the performance of his functions commits an offence and is liable on summary conviction to a fine of ten million dollars and to imprisonment for ten years”.

It also states that a Presiding Officer who refuses to accept from an elector, for consideration of the elector’s identify, a form of identification as authorised under the RoPA, commits an offence and is liable on summary conviction to a fine of five million dollars and to imprisonment for ten years.

Seemingly to cover all bases, the new proposed law dictates that a Presiding Officer who fails to comply with any of the provisions in the law commits an offence and is liable on summary conviction to a fine of five million dollars and to imprisonment for ten years.

The changes to the law also provide for charges to be laid against a person who allows an applicant to vote who is not eligible to vote; that person can be fined $10 million and jailed for ten years. Additionally, a person who removes a Statement of Poll posted outside the polling place commits an offence and can face jail time and be fined.

Moreover, a person who denies a duly appointed candidate or a counting agent the opportunity to make objections, or obstructs the candidate in the process of making his/her objections, can be jailed for ten years.

Again, to cover all bases, the amended RoPA outlines that “any person who contravenes any provision of this Act for which a penalty is not provided is liable on summary conviction to a fine of ten million dollars and to imprisonment for life”.

The Governance and Parliamentary Affairs Ministry has noted that another set of draft amendments will be added shortly to the consultation process with regards to the registration of voters under the National Registration Act. When the consultation process is concluded in six weeks, there will be a further review process by the Government to finalise a compendium of bills and regulations which will be tabled in the National Assembly.

The immediate former CEO of GECOM, Keith Lowenfield; his Deputy, Roxanne Myers, and the Returning Officer for Region Four at last year’s polls, Clairmont Mingo, are currently before the court on a raft of electoral fraud related charges.

Other electoral officials as well as politicians are before the court for allegedly attempting to alter the results of last year’s elections.

Director of Public Prosecutions (DPP) Shalimar Ali-Hack, SC, has hired a team of special prosecutors consisting of about six lawyers to prosecute the electoral fraud charges on behalf of the State.

The plethora of matters is currently before three Magistrates – the Chief Magistrate and Magistrates Sherdel Isaacs-Marcus and Leron Daly. Lowenfield’s election report claimed that the then governing APNU/AFC coalition garnered 171,825 votes while the PPP/C gained 166,343 votes.

How he arrived at those figures is still unknown, since the certified results from the national recount exercise supervised by GECOM and a high-level team from the Caribbean Community (Caricom) showed that the PPP/C won with 233,336 votes while the coalition garnered 217,920.

The recount exercise also proved that Mingo heavily inflated the figures in Region Four in favour of the then caretaker APNU/AFC regime – which was defeated by a No-Confidence Motion in December 2018.

In August this year, GECOM had voted to terminate the employment contracts of Lowenfield, Myers, and Mingo. The firing of the officials was met with much satisfaction by the Government, which viewed it as a step in the right direction to restoring public confidence in GECOM as it gears up to hold Local Government Elections.