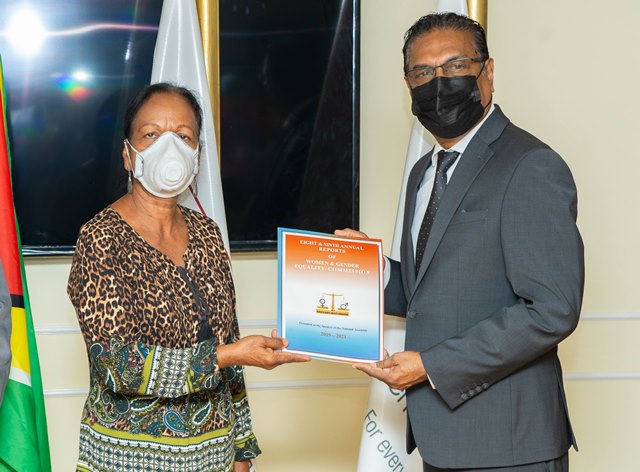 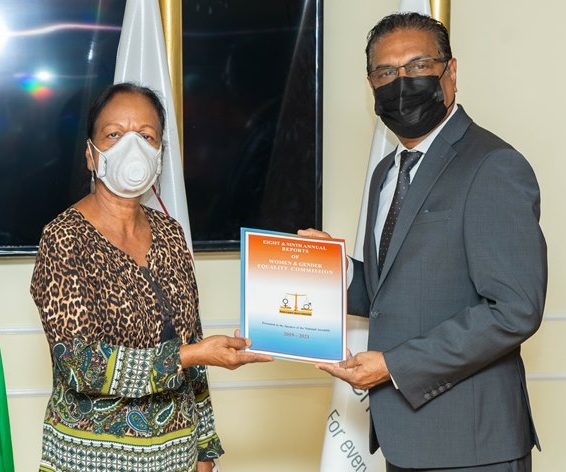 Chairperson of the Women and Gender Equality Commission, Indranie Chandarpal handing over the report to the Speaker of the House, Manzoor Nadir

Domestic violence, sexual abuse, incest, inaccessibility to social services and opportunities, unemployment and access to justice are just some of the issues that hinder the realisation of gender equality in Guyana.

This is according to the Women and Gender Equality Commission’s (WGEC) eighth and ninth annual reports which were handed over to Speaker of the National Assembly, Manzoor Nadir on Wednesday.

The report said these challenges are particularly found in rural communities.

“You will see that the report starts out with recommendations and this has to do with the work we do all over the country and without stakeholders to address the issues affecting women and men as well,” expressed Chairperson of the WGEC, Indranie Chandarpal.

She added, “I would say from a legislation point of view Guyana has done exceedingly well, but passing legislation is not the only thing. You have to ensure that it becomes a living thing, that it works for people.”

On that same token, Chandarpal noted that the legislation committee of WGEC is looking at the Barbadian legislation on sexual abuse to identify how it can be emulated in Guyana.

Providing an insight on how the commission achieves its mandate, the chairperson explained that the body conducts outreaches and sensitisation exercises across the country, and listens to the concerns of men and women, after which recommendations to address people’s challenges are submitted to the National Assembly.

Depending on the type of recommendation, whether it be one in the nature of legislation, heath care, education, social services or others, then the subject ministry would decide whether amendments need to be made to the law the facilitate improvements, Chandarpal pointed out.

“We also want to ensure that women and girls have opportunities everywhere. If you look in the education system you see that there is a paucity of women in the science field. What we have done, we have worked with the University of Guyana, help them with a $3M subvention so that they can give scholarships on a yearly basis.”

The chairwoman stated that recommendations in the two reports are not new, adding that the commission continues to regurgitate recommendations from previous years that have not been acted on, to keep them alive.

“Importantly, it is about how you educate people to understand that both men and women have a role to play in society. It is about educating them. It is not about saying women are good and men are bad. No, it shouldn’t be that. It is about the differences that we all have and respecting the differences.”

The Speaker commended the commission for the five-year strategic plan that it has developed. To ensure the commission reaches people and achieves its goal, the Speaker also called on the Commission to move away from its mechanical apparatus.

“Having read a few of these reports, I see that the commission is still operating with mechanical principles… But the important thing is about reaching out to people and launching new initiatives.”

The WGEC was established under section 212: G of the Constitution of Guyana. The commission is tasked with promoting and supporting the Convention on the Elimination of All Forms of Discrimination Against Women (CEDAW) and the fulfillment of the Sustainable Development Goal Number Five- Gender Equality. As part of its other functions, the critical body is also tasked with promoting the integration, empowerment and rights of women and men in Guyana.