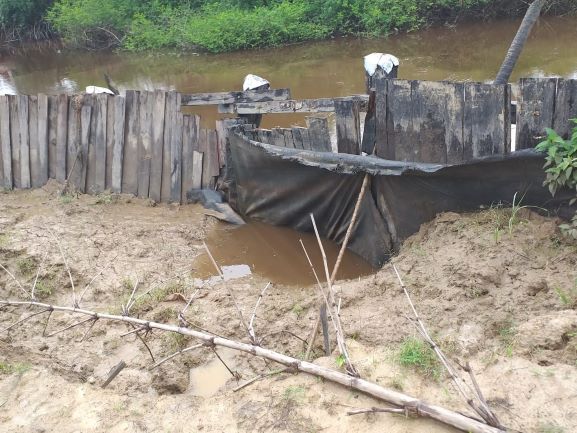 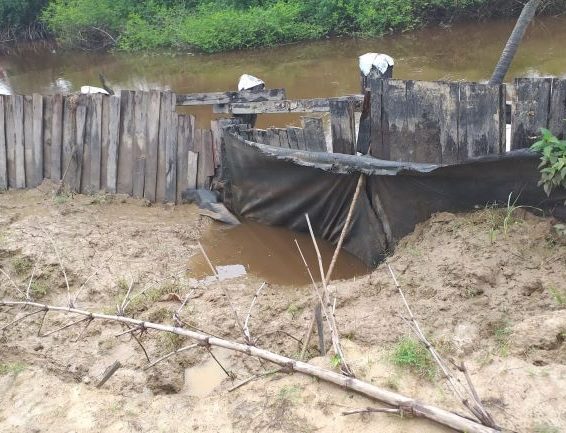 Several residents of Riverstown on the Essequibo Coast, Region Two (Pomeroon-Supenaam) are being affected by floods caused by dilapidated revetment in the community.

According to the residents, the poor state of the revetment, which was built to keep the trench water off the land, was further compounded by current high tides. They said that the flooding is a recurring situation that the village experiences.

The residents also complained that the water carries a stench and affects their health.

Most of the residents living near the revetment told this publication that they had to spend the majority of their time bailing water from their homes and putting sandbags at their doorways to reduce the flow of water into their lower flats. They also complained that they had to remove their household appliances and place them at a safer and higher level to prevent damages.

According to residents, their rice crops and cattle are also affected by the floodwater.

When contacted the Regional Vice-Chairman, Humace Oodit, who is in charge of all Drainage & Irrigation (D&I) works along the Essequibo Coast, said that the situation has been foreseen by officials of the Region and that efforts are ongoing to assess the problem.

He added too that they are currently seeking emergency funds from to Ministry of Agriculture to rebuild the revetment in the area. The vice-chairman stressed that the officials would now have to get the work done at a fast rate in order to ease the residents’ plight.

According to the Oodit, for years whenever there is a high tide and heavy rainfall, the water overflows into nearby villages.

“When the water becomes so high, it spills over into the line… I am aware that the water is very salty and affects the crops in the area and that’s why we need to immediately do some work there to make sure that we can prevent the crops from being destroyed,” Oodit said.