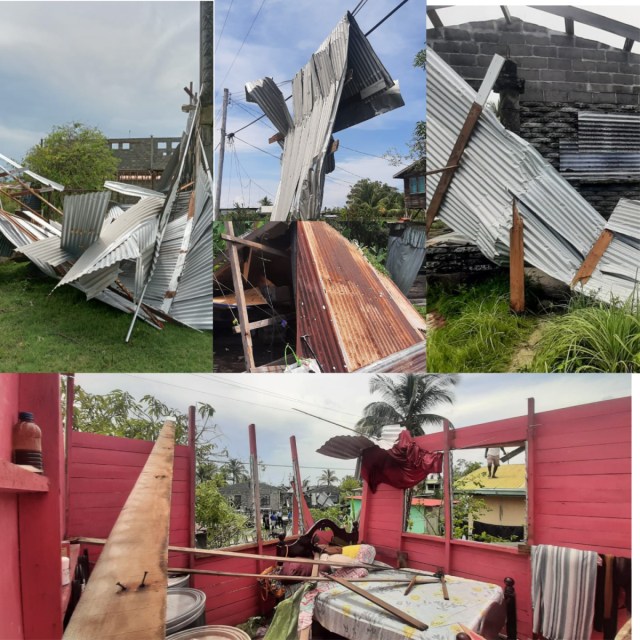 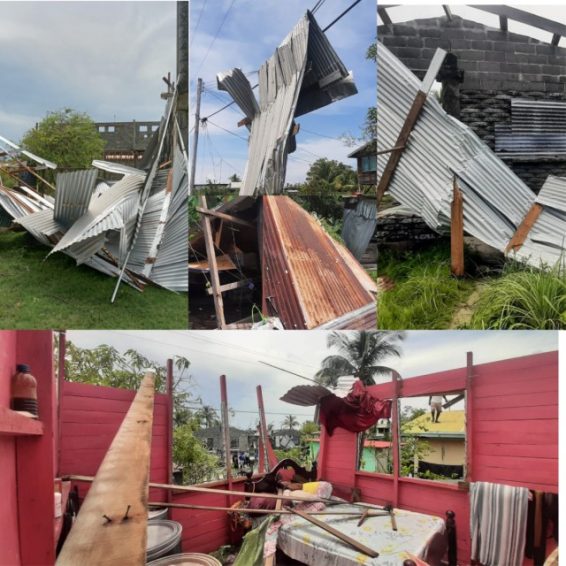 The Civil Defence Commission (CDC) is already procuring supplies for the wind-swept households of Bareroot and Dazzel Housing Scheme, who were battered by a storm on Monday that damaged a number of houses.

Speaking to Inews on Tuesday, CDC Deputy Director Major Loring Benons explained that the Commission has already been active in the area, having gone and done assessments of the damages on Monday.

“We were there yesterday and did an assessment and continue to do it, to know the direct requirement of zinc sheets. After we place the order and draw the zinc sheets, we’re hoping to get it worked out by tomorrow,” Benons said.

Benons noted that there is a possibility that even after their assessment and the procurement of zinc sheets, more supplies may be required. They are prepared for this and he was hopeful that by this weekend, all the necessary materials for the residents will have been purchased.

One of the houses that was destroyed by the heavy winds

Meanwhile during a press conference by the Office of the Leader of Opposition, a call was made for support to be provided to the residents. People’s National Congress Reform (PNCR) member Hazel Pyle Lewis detailed the damages that were observed when the party visited.

“Upon our visit to the affected areas, Bareroot and Dazzel, there were five houses in Bareroot. The residents there were affected severely. You had the walls removed, the roofs were removed and everything in the homes were wet.”

“The residents in Dazzel, one house was blown completely down and that family of two and the wife is pregnant. So, they were housed in the neighbour on the opposite side. Residents on twentieth Street, the entire roof was blown off and went straight into Bareroot,” she said. 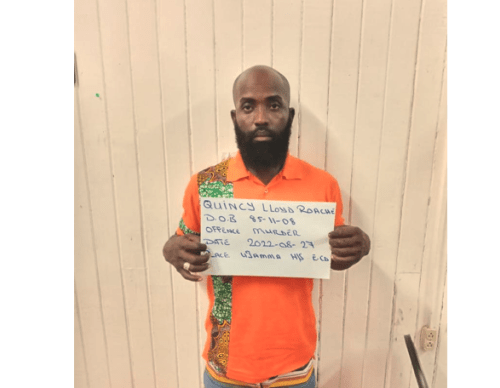 Over the past few months, there has been continuous rainfall accompanied by heavy winds. Several houses along the East Coast of Demerara, interior locations and sections of Georgetown were left without a roof.

This led to a series of damages to his home which he shares with his wife. The entire western side of the roof collapsed. Earlier in May, a freak storm damaged several homes and utility poles at the Bath Settlement area, West Coast Berbice (WCB).

Families were displaced during the incident which brought heavy rain and forced utility workers and firefighters to respond after power lines fell on fences and were sparking.

The storm caused 17 houses at Plantation Hope and two at Experiment to be damaged. Many were asleep at the time when the heavy winds coupled with rain ripped out zinc sheets from the roofs of some houses.