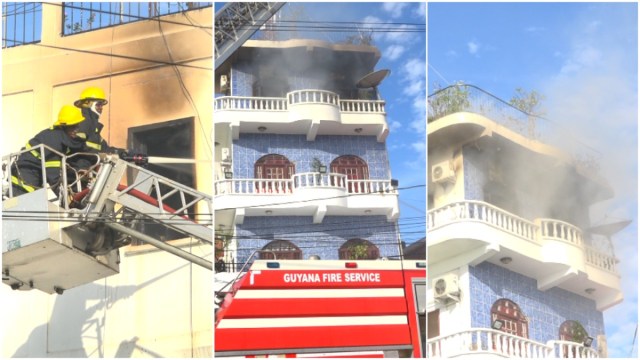 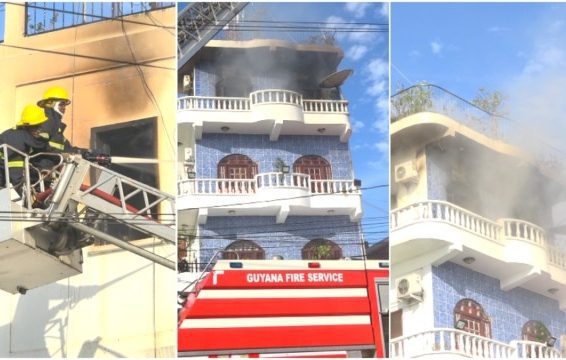 The Guyana Fire Service (GFS) came in for high praises this afternoon after its members successfully battled a blaze which erupted at a four-storey building at Duncan Street, Georgetown.

The firefighters managed to both control the flames from spreading to nearby structures and extinguishing the fire in record time, despite facing much challenges in accessing water.

Divisional Office-in-Charge of Operations at the GFS, Andrew Holder, admitted to media operatives that his team took longer than expected to get into firefighting mode due to the difficulties faced in finding a reliable source of water.

The GFS representative explained that firemen initially made use of the water in a nearby canal but this was exhausted within minutes. The closest water source was located on Laluni Street which, according to Holder, was a “considerable distance” away.

“We had some major difficulties accessing water…[but] after prolonged efforts to access water, we were able to arrest the situation, brought it under control,” Holder said.

He further bemoaned the inoperable fire hydrants in the area. “I must say today, the fire hydrants failed us,” he expressed, noting that the GFS is currently inspecting and operationalising fire hydrants throughout the city.

Andrew Holder, Divisional Office-in-Charge of Operations at the GFS

Meanwhile, Holder was proud to say that the firemen arrived on the scene of the fire within four minutes of receiving the distress call.

“When we got here, the top floor of the building was well alight. Our initial response was to contain the blaze,” he explained. Moreover, the GFS representative underscored the need for high-rise buildings to install proper fire safety features.

“I continue to stress the need for proper fire protection in high-rise and semi-high-rise buildings in terms of fire extinguishers, smoke alarms and in some instances, water sprinkler systems,” he noted.

The fire caused damages mostly to the upper flat of the building which housed a tyre shop on the ground floor and apartments on the other levels.

There were no deaths or injuries reported. The cause of the fire, which was detected at around 13:30hrs, is unknown. The estimated losses suffered is also not known.

But according to the owner of the building, Forbes Garraway, the destruction caused is minor and he is prepared to move on.

“This is a part of the game…nobody ain’t die. This is just minor matter, this is a fixable problem…the Fire Service did a good job…at least they out the fire… we just gotto pick it up from here and see where it going…we gotto move on,” the owner contended.

He explained that when he was informed of the fire and arrived at the location, it made no sense for him to go into the building to try to salvage anything.

“The fire, like it already in there carrying on, so the steam was too much for me and it make no sense injuring meself fuh this,” he pointed out.

Garraway further noted that the building is insured. Investigations into the cause of the fire have been launched.