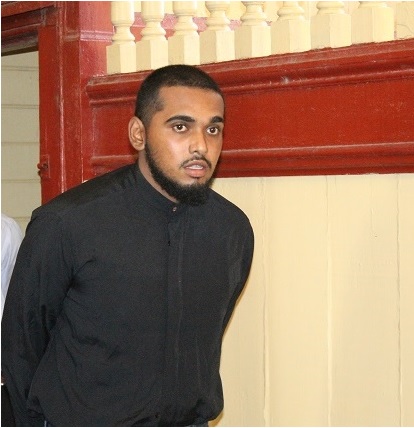 Death sentence for godbrother who killed British teen in 2015

“You are unfit to dwell among society” were some of the words Justice Sandil Kissoon declared while handing down a death sentence to the mastermind in the killing of British teenager, Dominic Bernard, in October 2015.

The body of 18-year-old Bernard, a British citizen, was discovered buried in a shallow grave in the backdam of Nurney, Corentyne, Berbice on November 5, 2015, several weeks after he arrived in Guyana and had gone missing.

Aaron Hing, who was the godbrother of the dead teenager, was found guilty of the gruesome murder by a jury on Friday. He is the second person to be convicted, while others are also on trial awaiting sentencing for the teenager’s death.

Handing down his sentence at the Berbice High Court this afternoon, Justice Kissoon said no penalty can compensate for the crime which Hing had committed on his godbrother.

Some of those officers testified to the statement given by Hing and Staymon George, who had already pleaded guilty and received a life sentence for the teen’s death on October 20.

Hing had told investigators that it was George who killed the British teen. He claimed that George had pushed the teenager into a grave, which they had dug prior, and then jumped in himself. The deceased and George started to scuffle during which he [George] took a hammer and hit the teenager in his head.

According to the statement, Bernard started to scream and George stuffed his mouth with a pair of socks and then they beat him until he stopped moving.

However, during the trial, Hing denied that he gave the police such a statement saying that it was a fabrication on the part of the police.

He said he did not kill Bernard but it was George who committed the act.

Hing told that court that it was George who lured Bernard to go the backdam to retrieve some guns that were reportedly buried there.

He said after George hit Bernard twice to his head with a hammer, he started to cry and was told by George if he told anyone he will harm him and his family.

The 18-year-old British teenager arrived in Guyana on the evening of October 14, 2015. George, who is said to be a close friend of Hing, was the driver who transported Hing to the airport to collect Bernard.

After collecting the teen from the Cheddi Jagan International Airport (CJIA), they stopped at a location on Sheriff Street where they ate and drank a few beers. Bernard was never seen again.

The teen was scheduled to fly back to England on November 5, 2015, but after he went missing, his parents came to Guyana in search of answers.