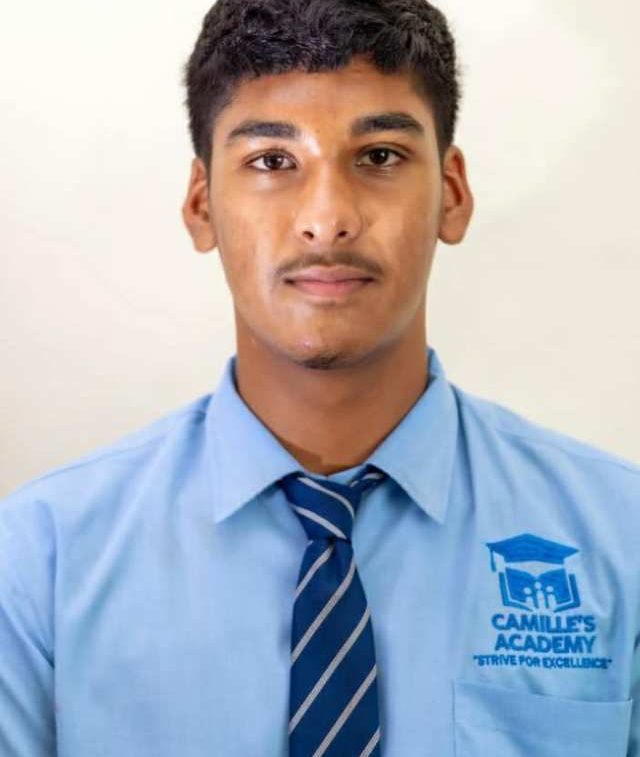 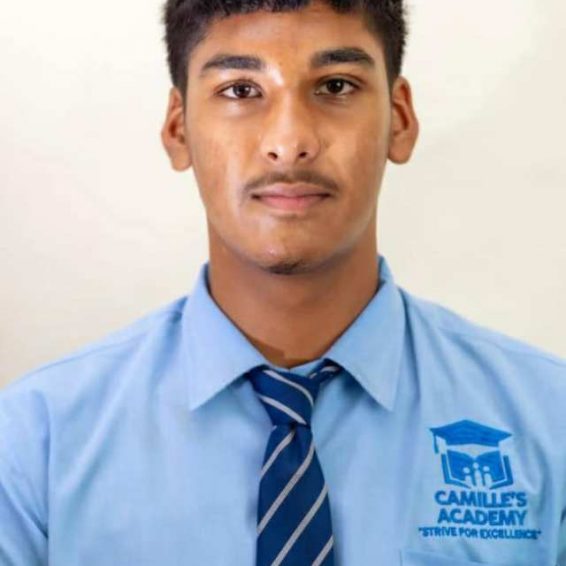 Persaud, a 16-year-old from Soesdyke, East Bank Demerara (EBD), attended Camille’s Academy – a stone’s throw away from his home. He wrote 15 subjects and secured eight Grade Ones and seven Grade Twos – thus making him the school’s top performer.

After much anxiety by the students, the results were released on Monday last, and Persaud is still now processing his successful feat.

“Anxiety rushed through my body prior to opening the results, but I felt relieved after seeing I passed, even though it still feels surreal,” he told this publication.

For the young man, preparation commenced in the early days of Grade 11, ensuring that his school-based assessments were out of the way. For him, this was a strategy to squeeze in extra time to study.

“For the preparation, I was tasked with establishing a study schedule/timetable to accommodate my daily activities; which was easy enough, but sticking to it was proving to be a bit difficult. I grew up loving the sport of cricket, whether it be playing or just watching the professionals on television, it always brought joy. Some other hobbies of mine include going to the gym with my friends,” he explained.

“Approximately three weeks prior to the sitting of my first examination, I had to sacrifice extracurricular activities to allow more time for studying,” Persaud indicted.

Despite covering these grounds, he posited, he was confronted with another challenge: low self-esteem. However, he persevered, and with a little motivation from his friends and home circle, he came out with all passes.

“A major challenge faced was actually personal. I was battling with low self-esteem for a lengthy period of Grade 11, due to me drowning myself in thoughts of not being ready to sit the examination,” he disclosed.

Daniel on his last day of school

Nevertheless, leading up to the exams, he was forced to put on the back burner some of the co-curricular activities that he enjoys – one such being cricket, which is his favourite sport.

Spending time with friends was also limited, and the focus was primarily on excelling at the examinations.

The reaction to his success was not just celebrated by him, but his entire family, friends, and teachers. He detailed that they were ‘over the moon’ upon hearing the good news.

Daniel shared, “My family played a very supportive role throughout my educational journey, by providing everything I needed to persevere. After receiving the results, my family was ‘over the moon’ excited. My grandmother and grandfather had the biggest smiles, and congratulated me. My mom, sister, and stepfather, who are currently residing in the United States, immediately called, and they were overwhelmingly excited and shared how proud they were.”

For him, the next step is to embark on the Caribbean Advanced Proficiency Examination (CAPE) with the end goal of pursuing a career in law.

“I always aspired to be a lawyer, ever since entering the second level of my educational journey; and with this successful performance at CSEC, I feel more confident of achieving this goal. With my drive and determination, I see myself not only as a top graduate of UWI in the field of Law, but as a budding attorney-at-law prepared to ensure justice prevails according to our constitution.”

The Soesdyke student reiterated that his educational foundation was set from a very young age, as teachers from various levels each played a supportive role in ensuring he succeeded. As such, he expressed gratitude to them for their continuous mentoring and guidance during his school life.

Presently, the young man is preparing for his next step in his academic pursuit, but he is also taking things lightly by assisting his grandmother, sleeping long hours, and meeting with friends.

Meanwhile, he advises students who would be preparing for the 2023 exams to stay focused, remain committed, and, most importantly, persevere. “At the end of the day, hard work and dedication pay off…”