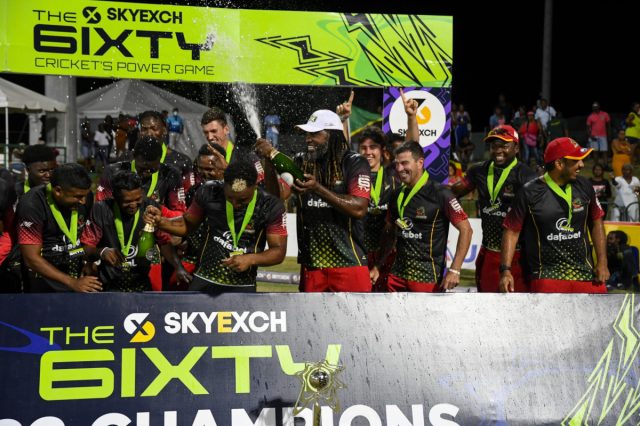 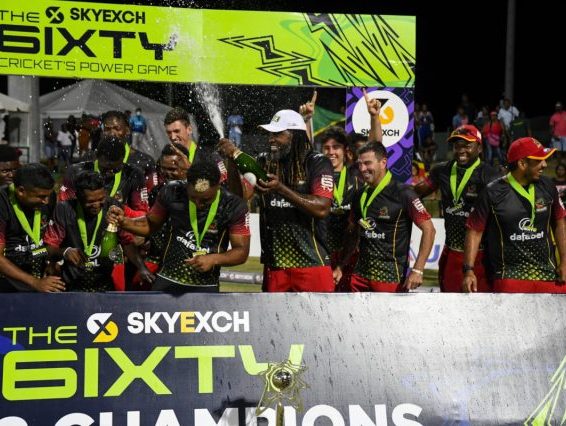 The Universe Boss, Chris Gayle, lifted his own trophy as the Patriots won the inaugural men’s SKYEXCH 6IXTY. In the poetry of cricket, Gayle was dropped twice in one over before he hit the winning runs to see his team over the line. You couldn’t have scripted it better. It was written in the stars.

When put in to bat in the men’s final the Trinbago Knight Riders had a tricky start to their innings losing two early wickets and finding themselves 6/2 after just nine balls. Sunil Narine, who had batted so brilliantly in the semi-final, was dismissed without scoring before some incredible wicket-keeping from Da Silva saw the back of Tion Webster.

Andre Russell looked to be the difference and was striking the ball well, but a stunning piece of fielding put an end to his efforts before Terrance Hinds and Seekkuge Prasanna were both sent packing. Resistance in the form of an unbeaten 37 from Tim Seifert meant the Patriots needed 85 to win.

The chase started with gusto from the Patriots who unlocked the extra Powerplay for the first time in the tournament and they raced to 43/0 after just 20 balls. Russell made the initial breakthrough bowling Lewis for 21 and Narine made light work of Dewald Brevis who went without scoring. But the excitement really started when the Universe Boss strolled out to bat.

With a trophy named after him and eternal bragging rights on the line, he came out with his usual intent and went aerial. This always has its dangers and with just 13 needed from 12 the ball found Jayden Seales, who dropped him before just two balls later he was also dropped by Anderson Phillip.

With seven needed off the final over, Gayle and Fletcher rotated strike until with four required, it was the man after whom the trophy was named to face. In his usual style, he swung hard and found the boundary on the on side. As the ball raced away for four, the Patriots were already celebrating, and Gayle’s wry smile was just an indication of what it meant to win the inaugural title and lift a trophy named after him.

Shakera Selman produced a magical spell to stun the Trinbago Knight Riders women and help her team become the first to lift the women’s Universe Boss SKYEXCH 6IXTY trophy. With the Knight Riders already on the ropes, Selman claimed three wickets in the penultimate over to clean up the Knight Riders’ batters and ensure a 15-run victory.

Batting first, Royals’ openers captain Hayley Matthews and Aaliyah Alleyne set the foundations before Matthews fell for 15. Their troubles continued when the in-form Chloe Tryon was stumped without adding to the score and Alleyne not long after both thanks to the bowling brilliance from Anisa Mohammed in the middle overs.

Chinelle Henry put up resistance with her 15 and the batting side reached 64 before Cooper was stumped for 6 and the Royals were all out 65 off 56 balls. It had been an all-round effort in the field by the Knight Riders and with the Deandra Dottin opening the batting and in fine form, they looked confident as they came out to chase the runs in pursuit of the title.

When Lee-Ann Kirby fell in the first over it was clear the chase would not be easy. Then in a shock twist, Dottin chopped on to her own stumps in the same over and suddenly the Knight Riders were 13/2 at the end of the second. The Royals continued to keep a lid on the run chase and remained disciplined in their bowling. 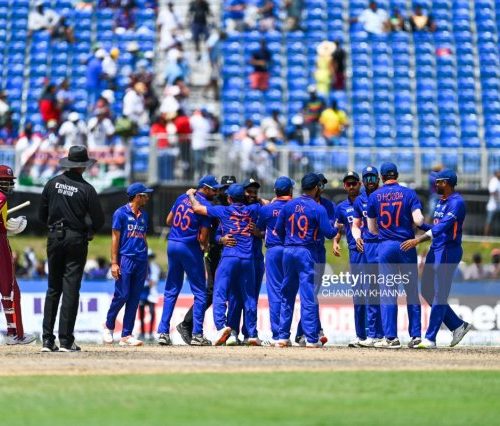 The boundaries dried up and there was a spell of 37 balls before the ball found the rope. The game was in the balance with the batting side needing 19 from 12 and it looked like a nailbiter was brewing. However, it was here that Selman produced her incredible over claiming Jensen caught by Matthews for 7 before Luus was caught at mid-off and Kycia Knight was caught by Joseph to seal the victory.

The Barbados Royals has secured the title in the inaugural women’s SKYEXCH 6IXTY and the party could begin.

Earlier in the day, four men’s teams had taken to the field across the two semi-finals. The first of the day saw St Kitts & Nevis Patriots get the better of the Jamaica Tallawahs as they made history with the highest successful run chase of the tournament. The game also saw the Universe Boss Chris Gayle launch his first SKYEXCH maximum of the tournament to raucous cheers from the partying crowd.

In semi-final two the Barbados Royals came flying out of the traps much due to the rockets being launched off the bat of Rakheem Cornwall. But when he was dismissed the run-rate slowed and the Royals could only manage 101/5 from their 60 balls. TKR raced to 43/1 after Sunil Narine was dismissed for 31 but Tion Webster batted well for his 27 which helped put a dent in the chase. In the end, it was a huge six from the bat of Hinds that saw them into the final winning by three wickets with eight balls remaining.

It truly was a ground-breaking tournament full of all the thrills and spills and everything in between and what better way for it to finish than with the image of the Universe Boss lifting the Universe Boss trophy.