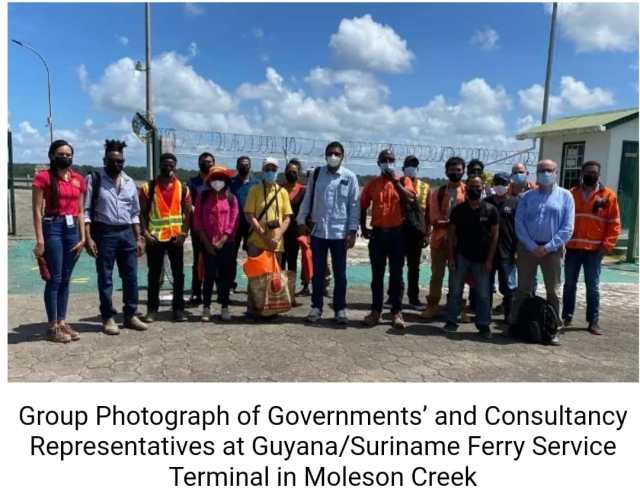 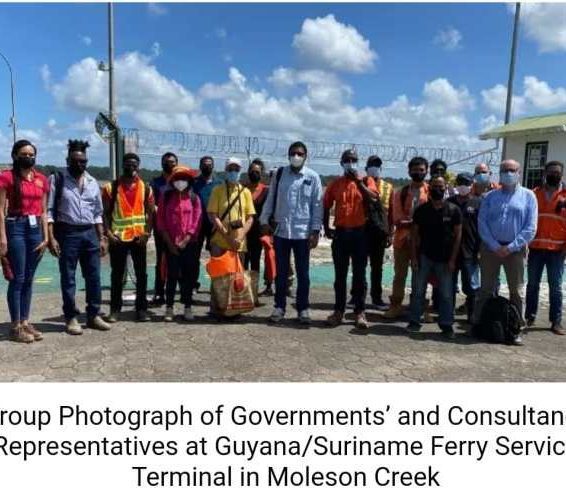 The shortlisted firms that are vying for the chance to construct the Corentyne River bridge were on Monday given a chance to examine the site and provided with a tour to better acquaint them with the transformational undertaking they will be embarking on.

After meeting in the boardroom of the Guyana-Suriname Ferry Service Terminal in Moleson Creek, East Berbice-Corentyne, they were given a tour of the proposed bridge landing sites in Moleson Creek, Guyana and South Drain, Suriname as well as a river tour around Lange Island to which the proposed bridge will be connected. They were also given the chance to ask questions as needed.

The Ministry of Public Works was represented by its Permanent Secretary – Vladim Persaud, Chief Transport Planning Officer – Patrick Thompson and three other members of staff from the Central Transport Planning Unit. Suriname was represented by Kees Boender – Technical Assistant for Capital Infrastructure Projects and his colleague, Firazia Ataoellah.
The construction of a bridge linking Guyana and Suriname is a priority project for the governments of both countries as has been reiterated on several occasions by their Excellencies, President Irfaan Ali and President Chan Santokhi.

The Governments of Guyana and Suriname have jointly agreed to realise the construction the Corentyne River bridge using the Public Private Partnership method of procurement with a DBFOM (Design – Build – Finance – Operate – Maintain) model contract. The deadline for submission of proposals by the shortlisted consultancy firms has been set to December 21, 2021.

In October 2020, Minister of Public Works Juan Edghill and his Surinamese counterpart, Dr Riad Nurmohamed had visited the site of the proposed Guyana-Suriname river bridge across the Corentyne River.

There were three points of demarcation identified – Moleson Creek, Long Island in the Corentyne River and South Drain in Suriname. Both Ministers planted flags on the Guyana side of the river and then the Suriname side of the river – where the bridge is to be constructed.

Then in November 2020, Guyana and Suriname signed a Memorandum of Understanding (MoU) for the construction of the bridge. The MoU was signed by Guyana’s Foreign Affairs Minister, Hugh Todd, and his Surinamese counterpart, Albert Ramdin, at the Presidential Palace in Paramaribo.

In February 2021, the Governments of Guyana and Suriname had invited companies to submit Expressions of Interest (EoIs) to provide consultancy services for the conduct of a feasibility study and the preparation of detailed designs for the construction of the bridge.
The Corentyne River bridge will not only link the two neighbouring countries, but also open up access to greater economic opportunities beyond them into French Guiana, and through the road network being developed into Brazil, and eventually further into South America.

Moreover, it is anticipated that Long Island will become an economic hub and free zone that will also see major infrastructural development such as hotels, recreational parks, entertainment spots, tourist attractions, malls, and farmers’ markets.

With the commitment to bridge Guyana and Suriname over the Corentyne River within five years, this project is expected to open up the pathway for other major developmental projects including the much-anticipated deep-water harbour project in Guyana.