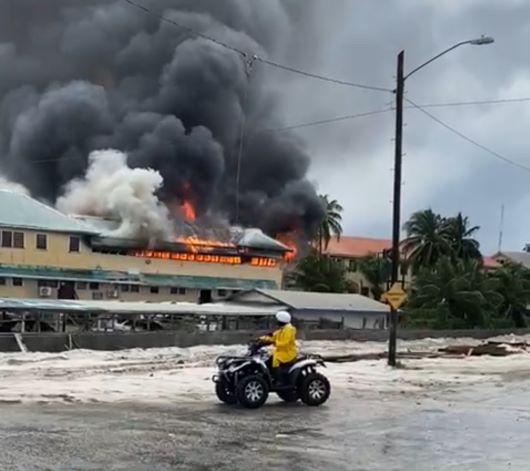 Ranks of the Guyana Police Force (GPF) who occupied the living quarters at Eve Leary, Kingston, Georgetown, are now being questioned in relation to the massive fire that destroyed the Office of Professional Responsibility (OPR) office on Saturday.

This was confirmed by Fire Chief Kalamadeen Edoo on Sunday.

“These are Police ranks who were staying in the barrack room, the living quarters upstairs. Those are the persons who are being questioned in relation to the fire,” he said. When asked if the origin of the fire has been determined, Edoo said investigations are still ongoing to determine the origin.

“Investigations are still ongoing within the Guyana Fire Service (GFS), and the Guyana Police Force (GPF)…within a week or so you will get a full update as to everything surrounding the fire.”

The blaze on Saturday destroyed the Police Force’s Office for Professional Responsibility (OPR) and there was minimal damage to the Office of the Director of Public Prosecutions (DPP).

It is still unclear if a temporary building will be used for the DPP but according to Minister of Home Affairs Robeson Benn, the files are being safely stored at the Police Training Centre at Eve Leary.

The GFS said they received a call at 13:50h alerting to a fire at the location. Water Tenders from the Central, Alberttown, West Ruimveldt and Campbellville Fire Stations were immediately dispatched to the scene.

The fire is reported to have begun on the top floor of the western side of the building, in an area that is used as the living quarters for ranks of the GPF. It subsequently spread to other parts of the building due to the age and combustibility of the structure and its contents.

As a result of the fire, the entire living quarters, the OPR, the Construction Department, and Stores were completely destroyed, while the Office of the Department of Public Prosecutions suffered minor water damage.

A vendor who was not too far away from where the fire started, told the media that they heard loud explosions coming from the building, and sometime later, smoke was seen emanating from the OPR’s building.