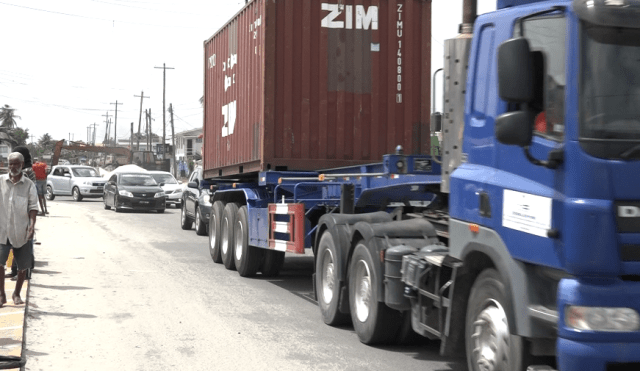 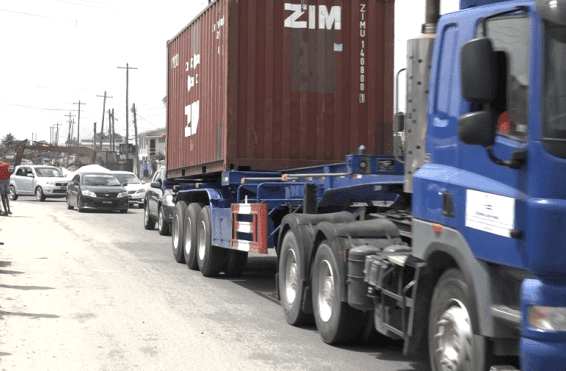 Container trucks to operate at nights during holiday season

In order to ease traffic congestion in and around the capital city, Georgetown this holiday season, container trucks are required to operate only at nights.

This was announced by Traffic Chief Ramesh Ashram on Monday during a press conference hosted by the Guyana Police Force (GPF) to unveil its Christmas Policing Plan 2021.

He said container trucks are asked to traverse between 22:00hrs to 05:00hrs daily and that business owners are advised to offload containers at the terminals then transport their goods using smaller vehicles.

“Small vehicles, such as cars, canters…this helps in reducing the congestion in and around Georgetown and the East Bank Corridor a great lot,” the Traffic Chief said.

In another bid to ease traffic congestion during this bustling period, there will be around-the-clock police patrols that will clamp down on drivers obstructing the free flow of traffic.

Additionally, these patrols will look out for instances of speeding, driving under the influence of alcohol and drugs, and overloaded minibus and hire cars.

“Our intention is to ensure a free flow of traffic, to minimise traffic congestion, to minimise accidents and to ensure that citizens obey all traffic laws through diligent enforcement countrywide,” the Traffic Chief affirmed.

For Georgetown, ranks will be stationed at several key areas of high traffic and business entities. Fixed pointed will also be established in the various regions.

Meanwhile, Police Commissioner (ag) Nigel Hoppie has also given the assurance that adequate resources will be deployed to assist in both traffic management and crime fighting.