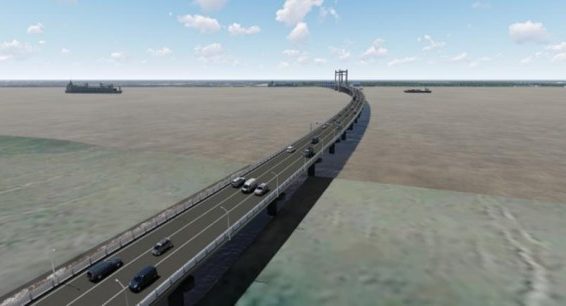 Cabinet has granted its no-objection for the Ministry of Public Works (MoPW) to engage China State Construction Engineering Corporation Ltd. to construct the New Demerara Harbour Bridge (NDHB) based on a Design-Build-Finance (DBF) model with financial terms and conditions which would be no less favorable than those submitted in the preferred bidder’s price proposals.

The proposal by China State Construction Engineering Corporation Ltd under the DBF model contemplates a construction cost of US$256.6 million, the lowest amongst all bidders.

Initially, the Government of Guyana, through the MoPW, pre-qualified nine (9) firms to submit bids for the construction of a two-lane dual carriageway (4 lanes) hybrid Cable-Stayed center span bridge with Concrete Box/T Beam Girder approach bridge structure with the following inclusions:

The pre-qualified firms were invited to submit bids to construct the bridge using a Design-Build-Finance (D-B-F) contract and Design-Build-Finance-Operate-Maintain (D-B-F-O-M) contract. At the pre-bid meeting, held on June 28, 2021, it was agreed that the closing date for submission of bids would be October 5, 2021. Only five of the pre-qualified bidders submitted bids, of which four (4) obtained the required minimum score for the technical proposal.

The Evaluation Committee recommended that the Procuring Entity engage China State Construction Engineering Corporation Ltd. using the Design-Build-Finance (DBF) model on financing terms and conditions no less favourable than those proposed by the highest ranked bidder. The NPTAB subsequently submitted the recommendation to Cabinet, and Cabinet granted its ‘no objection’.

The NDHB comprises a critical component of the Government’s drive to expand and modernize Guyana’s transport infrastructure. It aims to replace the aging Demerara Harbour Bridge with a modern four-lane structure that will facilitate greater traffic capacity and dramatically improve commuter convenience. The new bridge will offer easy connectivity to both the existing East Bank Demerara road as well as the new Diamond to Ogle bypass on the eastern side of the River and to the existing West Bank Demerara Road and the new Parika to Schoonord Road on the western side of the River.

The new bridge will also offer critical connectivity to the new Wales Development Authority which will be a major centre of productive activity when it comes on stream.