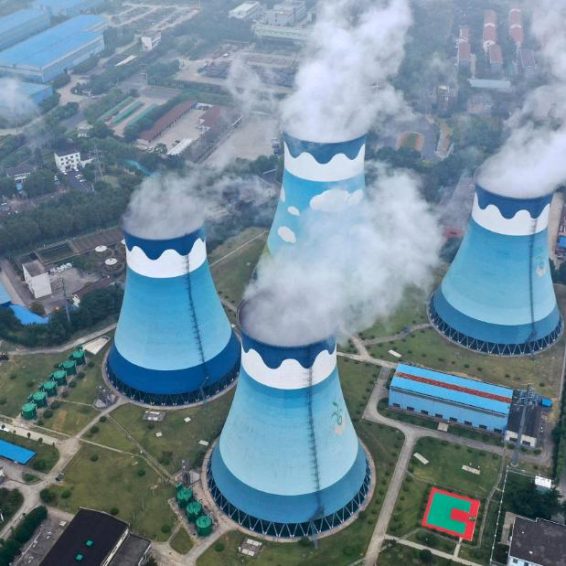 3 weeks ago·5 min read
ShareTweetPinShare
Home
World News
China’s growing power crunch threatens more global supply chain chaos
Companies in the country’s industrial heartlands have been told to limit their energy consumption in order to reduce demand for power, state media has reported. And supply has been cut to some homes, reportedly even trapping people in elevators.
An “unexpected and unprecedented” power cut hit three northeastern provinces on Monday, according to the Global Times, a state-run tabloid. The newspaper reported Tuesday that power rationing in Heilongjiang, Jilin and Liaoning provinces has “resulted in major disruptions to the daily lives of people and business operations.”
Power shortages have also hit the southern province of Guangdong, a major industrial and shipping hub. Local officials said Monday that many firms are trying to reduce demand by working two or three days per week.
China’s State Grid Corporation said Monday that it would “go all out to fight the tough battle of power supply,” making every effort to secure residential consumption.
Read More
China was hit by a similar power crunch in June, but the situation is getting worse because of a perfect storm. Its industries are facing huge pressure from soaring energy prices, and from Beijing to tackle carbon emissions.
The world’s biggest polluter is trying to meet a pledge that its carbon emissions will peak before 2030. That requires its provinces to use less fossil fuel for each unit of economic output, for example by burning less coal to generate power. At the same time, demand for Chinese-made goods has surged as the global economy emerges from the pandemic. The result: not enough power to go round.
Major international suppliers are bracing for impact on businesses already confronting delays caused by shortages and global shipping delays.
Pegatron — a Taiwanese firm that produces components and assembles iPhones for Apple (AAPL) — said Tuesday that it is cooperating with “local [Chinese] government policies” to “activate energy-saving mechanisms” and adjust its production line, in response to a request from CNN Business for comment about the power crisis. Pegatron has a big factory in eastern China’s Kunshan city, where Taiwanese media has reported that authorities are limiting electricity supply.
Power rationing could create new headaches for the tech supply chain, according to Dale Gai, a director at Counterpoint Research, although likely not as severe as the worldwide shortage of computer chips that has hammered everything from cars and washing machines to other electronics.
Outages in areas where smartphone modules are typically assembled could lead to some short-term delays.
There is “probably some delay of the components for a week or so,” Gai said. “Which still is manageable, but it’s a delay.”

The shock is even prompting economists to cut growth expectations this year for the world’s second largest economy.
Analysts at Nomura trimmed their forecast for Chinese growth in 2021 by half a percentage point to 7.7% on Friday, citing the “rising number of factories” that have had to “cease operations,” either because of local energy consumption mandates or power outages due to rising coal prices and shortages.
5 things to know about the Evergrande crisis: A simple breakdown
Analysts at Goldman Sachs followed on Tuesday, cutting their 2021 GDP growth forecast to 7.8% from 8.2%, citing “recent sharp cuts to production in a range of high-energy intensity industries.”
They noted “considerable uncertainty” headed into the final quarter of the year, given that the Chinese economy already faces risks because of the debt crisis at Evergrande — the embattled conglomerate that has sparked fears among some analysts of a potential Lehman Brothers moment for China.
Energy supply problems aren’t new for China. This summer, several Chinese provinces warned of shortages in what was then country’s worst power crunch since 2011.
But the latest reports are even more concerning. The acute shortages in parts of the northeast will “continue for some time,” reported state broadcaster CCTV.
China’s construction boom is sending CO2 emissions through the roof
China pulled itself out of the pandemic slump largely thanks to a boom in construction and manufacturing: But real estate projects and factories require a ton of power to operate, and thus massive amounts of coal.
The focus on infrastructure and construction pushed China’s carbon emissions to record highs in the first quarter of 2021, according to research released in May from the Centre for Research on Energy and Clean Air (CREA). The agency said that was the fastest rate of growth in more than a decade.
“The economy is much more driven by the industrial sector than the consumption sector,” wrote Macquarie economist Larry Hu in a Monday research note. “Unfortunately, the energy intensity in the industry sector is much higher than that in the consumption sector.”
The post-pandemic commodities boom and ambitious climate targets, meanwhile, have driven coal prices sky high, given the increase in demand and decrease in mining. Hu pointed out that the price of thermal coal — which is primarily used to generate power — has surged this year from 671 yuan ($104) per ton to roughly 1,100 yuan ($170). It doesn’t help that trade tensions with Australia have caused China to put up barriers to importing coal from that country.

Perhaps the biggest contributing factor, according to several analysts, is the drive to meet President Xi Jinping’s goal for a carbon neutral China by 2060.
What is COP26? How the pivotal UN conference could avert global climate ‘catastrophe’
Hu pointed out that the Chinese government is targeting a 3% drop in “energy intensity” per unit of GDP this year.
In August, China’s National Development and Reform Commission (NDRC) called out nearly every major Chinese region and told them to curb or monitor their energy consumption and intensity through the rest of the year.
Nine of China’s nearly three dozen provinces and regions increased energy intensity in the first half of the year, according to the agency. That included Guangdong province in southern China, a major factory hub where one wood mill recently lowered capacity by more than half because of power limits, according to the Global Times.
Another 10 provinces — including Heilongjiang and Liaoning — did not meet energy requirements, the NDRC said in its August announcement.
“Beijing’s unprecedented resolve in enforcing energy consumption and intensity limits could result in invaluable long-term gains, but the short-term costs to both the real economy and financial markets are substantial,” wrote the Nomura analysts.

Some Chinese state media outlets have also called for a balance to be struck between meeting climate targets and allowing the power crisis to spiral out of control.
Regions “cannot be too aggressive” or “slam the brakes too hard” on controlling energy consumption, read an opinion piece published in the People’s Daily, the ruling Communist Party’s mouthpiece, on Sunday.
“As this concerns the development of the economy and society, they must pinpoint where they should work on and keep a balance,” the piece read. “Otherwise, it will catch people off guard, especially for certain industries, where they might be forced to halt production on short notice.”
— Lauren Lau, Eric Cheung, Laura He and CNN’s Beijing bureau contributed to this report.
Correction: An earlier version of this article incorrectly characterized the measures that Pegatron is taking in response to the power crunch.