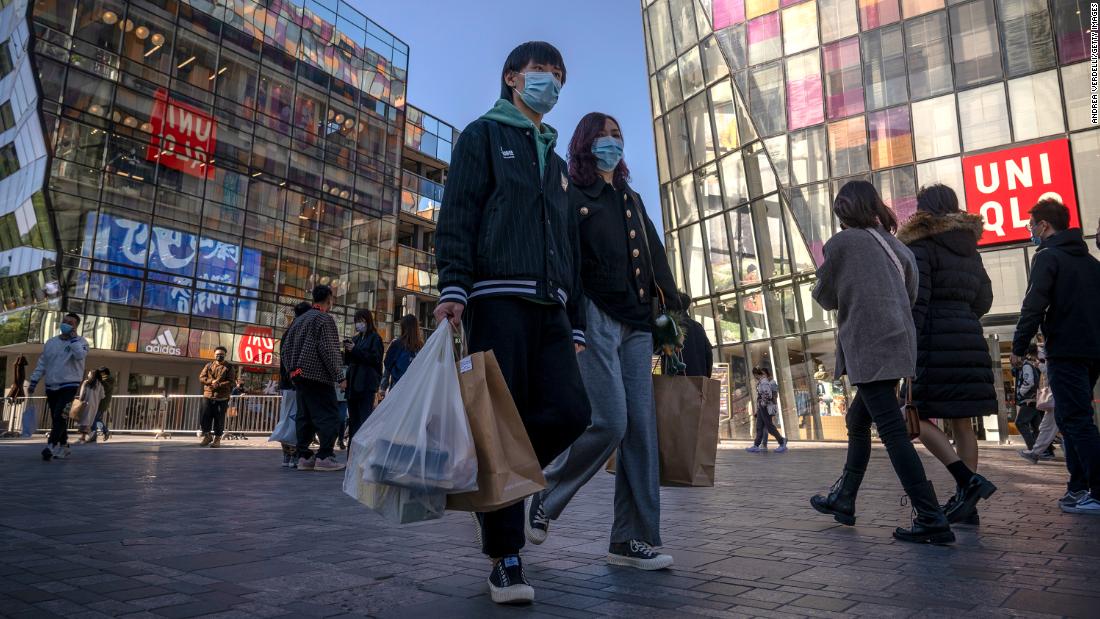 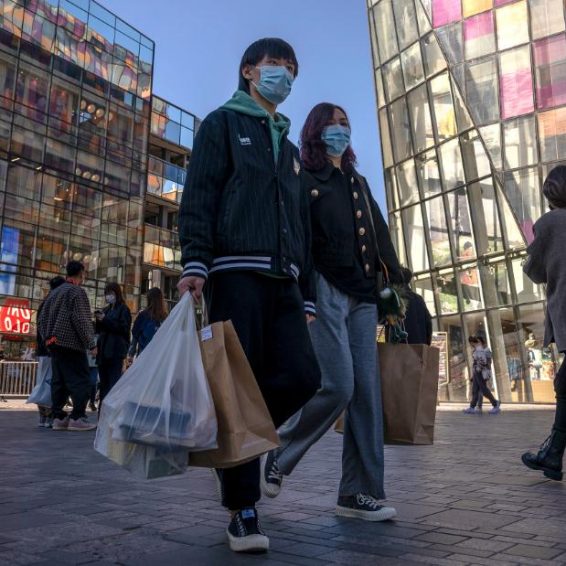 2 months ago·6 min read
ShareTweetPinShare
Home
World News
China’s economy is getting walloped by crises in energy, shipping and real estate
The content originally appeared on: CNN
The economy expanded by just 4.9% in the third quarter, compared with the same period a year earlier. That’s much slower than the 7.9% increase China registered in the second quarter. It’s also the weakest rate of growth since last year’s July-to-September period, when GDP also grew 4.9%.
“The challenges of keeping the economy running smoothly have increased,” said Fu Linghui, spokesperson for China’s National Bureau of Statistics, at a press conference in Beijing on Monday. He said the country’s recovery from the Covid-19 pandemic is “still unstable and uneven.”
China was the only major economy to escape 2020 without falling into recession. But it has encountered a slew of challenges this year that are weighing heavily on growth.
The country is in the middle of an energy crunch that is denting factory output and leading to power cuts in some areas. That problem has been fueled by demand earlier this year for construction projects that need fossil fuel and are at odds with Beijing’s pursuit of ambitious targets to cut carbon emissions.
Read More
China and India face a deepening energy crunch
Shipping delays and mounting inventories have also hit smaller manufacturers in China that are now hurting for cash, resulting in lost orders and production cuts.
The real estate sector is also suffering from a government drive to curb excessive borrowing. Property investment is now falling. That’s placing strain on developers, not least Evergrande, whose debt crisis has triggered worries about the risk of contagion for the sector and the broader economy. Some other property firms have already indicated that they are struggling to pay their debts.
The fallout from those headwinds was apparent all over Monday’s data.
Industrial production ticked up a mere 3.1% last month from a year ago, the lowest rate since March 2020, when the pandemic was slamming China’s economy. Real estate-related activities — including cement and steel production — registered steep contractions. Fixed-asset investment, meanwhile, appears to have declined in September, reversing a slight gain in August, according to estimates from Goldman Sachs.
“Official GDP growth slowed to a crawl last quarter, wrote Julian Evans-Pritchard, senior China economist at Capital Economics, in a research note, adding that “industry and construction appear on the cusp of a deeper downturn.”

The triple threat of simultaneous crises in energy, shipping and the property sector is impossible to ignore.
Manufacturing has been “hit hard” by supply chain disruptions, noted Iris Pang, chief Economist for Greater China at ING Group. She pointed out in a Monday research note that operations at some ports were affected by Covid outbreaks and the steps authorities took to contain them during the most recent quarter.
Meanwhile, a massive power crunch has made things worse. Larry Hu, head of China economics for Macquarie Group, noted that the slowdown in industrial production was “more pronounced in energy-intensive sectors,” like steel and cement.
China’s record factory inflation poses another threat to supply chains
Beijing on Monday tried to assuage fears about the energy crunch’s impact. Fu, the National Bureau of Statistics spokesperson, said the “tight supply of energy is just a phase, and the impact on the economy is controllable.”
While energy prices have “risen sharply” this year, he said that the crunch would be “alleviated” as the government implemented measures to bring the problem under control. In early October, for example, China ordered coal mines to ramp up production, just months after ordering the opposite to rein in carbon emissions.
Some experts agreed that the energy crunch would likely dissipate.
“We think the electricity shortages and production cuts will become less of a problem” later in the fourth quarter, said Louis Kuijs, head of Asia economics for Oxford Economics. “Senior policymakers have started to stress growth and we expect them to start calling for the pursuit of climate targets on a more measured timeline.”

Long-term problems in the property sector

The debt woes dogging the country’s property sector may be harder to fix.
Property, together with related industries, accounts for as much as 30% of the country’s GDP. Should Evergrande, the country’s second largest developer by sales, collapse, investors and buyers may be scared away. A potential wave of defaults by developers could have a significant impact on growth and pose risks to financial stability.
Property sales, investment and construction activity are already in trouble. Property investment dropped about 4% in September from a year ago after flattening in August. Contrast that to the start of this year, when such investment skyrocketed 38% during January and February.
“It shows how fast the property sector has cooling recently,” Hu from Macquarie wrote in a Monday note, pointing to that data. He suspected the property sector will be “key to watch” over the next year, and suggested problems there could be China’s biggest growth headwind in 2022.
‘Ghost towns’: Evergrande crisis shines a light on China’s millions of empty homes
Fearing the property market had become overheated, Beijing started tightening the screws on the sector in summer 2020 by requiring developers to cut their debt levels.
And earlier this year, the government made it clear that it would prioritize “common prosperity” and tame runaway home prices, which it has blamed for worsening income inequality and threatening social stability.
Evergrande has experienced a major liquidity crunch. It warned last month that it could default, and has since then missed at least three interest payments. The company’s crisis has also unsettled global investors in recent weeks, raising concerns about a potential domino effect on the broader Chinese economy and financial markets.
Beijing has tried to tamp down fears about the property sector. After weeks of silence on the developer, the People’s Bank of China said Friday that Evergrande had mismanaged its business but risks to the financial system were “controllable.”
Beijing’s crackdown on the housing sector is China’s “key long-term challenge,” said Aidan Yao, senior emerging Asia economist with AXA Investment Managers.
He told CNN Business, though, that issues with companies like Evergrande are not likely to push Beijing to do a policymaking “U turn” on the housing industry. Instead, the government may focus on trying to stop rampant speculation in the housing market.
“I think there could be some sort of fine tuning the margin on the tightening measures,” he said, though added that weakness in the sector will “spill over” into next year.
A real estate downturn will almost certainly continue to weigh on economic growth, too. Oxford Economics has cut their forecast for fourth quarter growth to 3.6%. That would be the worst performance since the second quarter of 2020.

Some bright spots, but trouble ahead

There were some encouraging signs, particularly in services. Retail sales grew 4.4% in September, an acceleration from August’s 2.5% increase.
That’s largely because of China’s efforts to contain the coronavirus, according to analysts from Goldman Sachs. While the country remains largely closed off to the rest of the world, its zero tolerance approach to containing infections has kept the virus from spreading out of control.
The Goldman analysts noted in a Monday note that while the control measures cut into retail sales growth in August, those restrictions were soon relaxed, contributing to a rebound.
The Delta variant has hit China’s economy hard. Now a property crunch is looming
They said they expect consumer spending to continue recovering in the fourth quarter, barring “major waves” of Covid-19 outbreaks.
Despite the slowing growth this quarter, China is also still on track to meet an annual growth target set by Beijing of more than 6%. For the first three quarters of 2021, GDP grew 9.8% from a year ago, when the Covid-19 pandemic was taking its biggest toll.
“On the whole, the economy continues to recover,” said Fu, the National Bureau of Statistics spokesperson, adding that the country has the “ability and conditions” to reach its development targets this year.
But many analysts are still concerned. Several firms have cut their growth forecasts for China this year. And the country will likely need to take more steps to shore up growth in the coming months, according to Kuijs from Oxford Economics.
He wrote that it’s likely China will relax some aspects of “overall credit and real estate policies,” for example, and said that policymakers will likely encourage more infrastructure projects as well.
— CNN’s Kristie Lu Stout and Sophie Jeong contributed to this article.