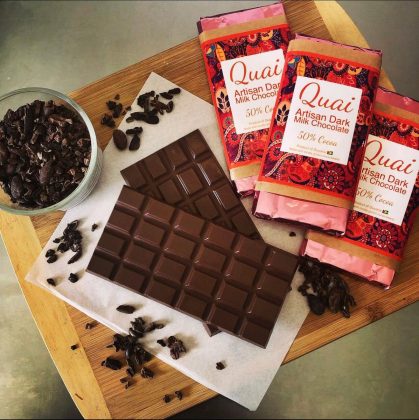 Naiya Kartick-Bulkan with her daughter Quinn, who is eating one of Quai’s chocolate bars

Love of quality chocolates has led Chef Naiya Kartick-Bulkan to partner with the Blue Flame Women’s Group of the Barima-Waini Region One to create her own brand of chocolate.

She grew up in Guyana, and after completing high school, moved to Canada to further her studies. There, she obtained a Bachelor’s Degree in Chemistry Specialist from the University of Toronto, and it was while she was in Canada that she started a hobby of baking.

After she completed her studies in Canada, Naiya returned to Guyana, where she continued baking for family and friends. They really enjoyed her creations, and suggested that she make a career out of it.

“I was inspired to combine my knowledge of chemistry with food, desserts in particular, which led me to apply to culinary school in France. In 2015, I moved to France to learn the art of patisserie. I attended culinary school, and then completed an internship at a top restaurant in St Remy de Provence. This experience allowed me to gain the knowledge, learn the techniques, and develop the discipline required to start Scrumptious Sweets and Treats when I came back to Guyana in 2016,” she said.

Naiya takes the classic and adds her style to create an experience in the mouths of her clients. Her time back in Guyana, besides creating unique desserts, has led to Naiya travelling throughout the country as well as exploring different ingredients. She looked at ways of incorporating them in her recipes to provide the truly unique Guyanese experience.

When she discovered Guyana’s superior quality cocoa beans, her love for chocolate led her to venture into new territory. Around the time, her daughter Quinn was born, and she had to take time off from Scrumptious, which gave her time to think about what she really wanted to do.

“I have always loved chocolate, so why not make my own? I started doing my research on the process of chocolate making, and then jumped right into it. I wanted to be sure the cocoa beans I used were locally grown and ethically sourced, which is how I got into contact with the Blue Flame Women’s Group from Region One. In my opinion, they are one of the most progressive groups to emerge from Guyana’s hinterland, producing quality organic cocoa among other products,” she said.

That birthed Quai Craft Chocolate – a name that was inspired by her daughter and is a combination of Quinn and Nai (Naiya’s nickname).

The Blue Flame Women’s Group was formed just over ten years ago, and is regarded as one of the most progressive economic ventures from Guyana’s hinterland. The group is known for its quality cocoa sticks, cassava bread, cassareep, coffee, and coconut oil among other products. The group also exports and sells cocoa beans.

“The biggest hurdle I’ve had so far was initially getting the cocoa beans. The beans are being sourced from Region One, and they rely on a ferry to transport their products. At the time that I ordered the first batch, the boat was having issues and it took me 6 weeks to receive the beans, when I was advised it usually takes 2 weeks,” Naiya said.

Quai chocolate is stone-ground, then handcrafted and moulded in small batches to maintain the quality, taste and integrity of the product. Currently, Quai chocolate bars are 50 per cent cocoa, and four specialty flavours will be available upon launching – dark milk, orange cardamom, sorrel cinnamon, and peanut praline.

“I want to provide a quality local chocolate that can rival the Craft chocolate bars being sold internationally. We have some of the best cocoa in the world being grown right here in Guyana,” she said.

For now, Naiya is currently building up her stock before an official launch. However, persons can contact her via WhatsApp 673-2946 or on Quai’s Instagram page @quaicraftchocolate to access the bars.