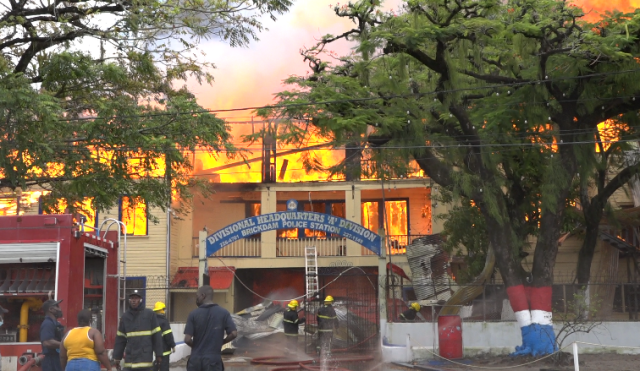 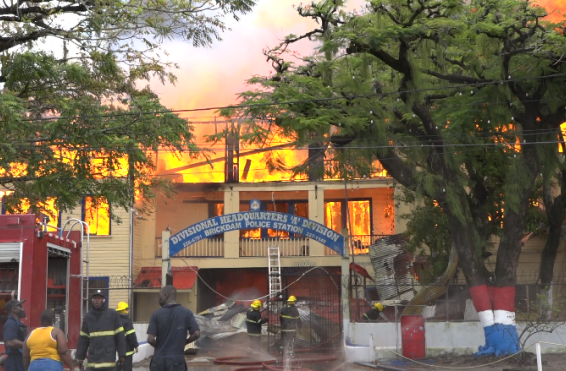 -says int’l assistance will be pursued to bolster local investigation

Vice-President Bharrat Jagdeo believes the recent fire that razed the Brickdam Police Station must be treated as a potential act of domestic terrorism, one that would necessitate the assistance of overseas investigators to bolster the capacity of local sleuths.

He made these observations during an interview with social media commentator Mikhail Rodrigues. While he emphasised that he did not want to be premature with his conclusions, he said the inferno should be treated as a possible terrorist act.

“As it relates to the fires, it seems as though there is a pattern. I do not want to be premature in accusing anyone of anything at this point in time, but it’s a worrying trend… It seems as though, on the face of it, that all of these are not isolated, unrelated events.

“I have long-term memory, and I’ve spoken to the President about this. We may need external assistance…it would be worth it if we have external assistance on this matter, to bolster our investigative capability and to trace if this was a terrorist act – and this is domestic terrorism I’m talking about. That’s how we have to treat it,” he said.

Overhead photo of the fire destroying the Brickdan Police Station

According to Jagdeo, the fire and other events recall periods under his own Presidency. One example he used was the Ministry of Health which was burned down in 2009, two years before Jagdeo left the Presidency.

Jagdeo recalled that the Government received help from the United States Federal Bureau of Investigation (FBI), and links were drawn to a number of prominent members of society, some of whom are still around to this day.

While he noted the importance of being on guard, Jagdeo also noted that Government cannot afford to become paranoid.

“So, we have to be on our guard, while avoiding being paranoid… Paranoia is not a useful condition in which to do clinical analysis. And so, I’m not suggesting that we should avoid in-depth clinical analysis – that has to be done, and it is being done – it is to ensure that we don’t get too distracted, and it becomes the prevailing state of mind,” Jagdeo said.

It has been reported that the devasting fire, which started at about 11:00h, consumed 80 per cent of the three-storey structure. Among the facilities destroyed are the Property Room, Inquires Office, Traffic Department and Officers’ Mess. Just the barracks located on the western end and lining Manget Place remained intact, along with the Impact Building and the lockups.

All 16 prisoners within the facility were accounted for. Salvage records were saved, and the station’s arsenal of weapons was secured before the building was completely destroyed.

This publication understands that 398 officers were working from the compound at the time of the fire.

Twenty-six-year-old Clarence Greene subsequently confessed on video to setting the Police Headquarters on fire, after he was ratted on by two of his cellmates. Based on reports, the suspect was recently arrested in connection with a robbery-under-arms incident, and was placed in the Brickdam lockups prior to starting the fire.

The man told the Police that he became frustrated after being detained for a long period of time, and he then decided to start the fire. The confession led Police to question all the prisoners at the Brickdam Station at the time of the incident. The suspect was later interviewed on camera, and he allegedly confessed again to Police.
He was later charged and remanded to prison.