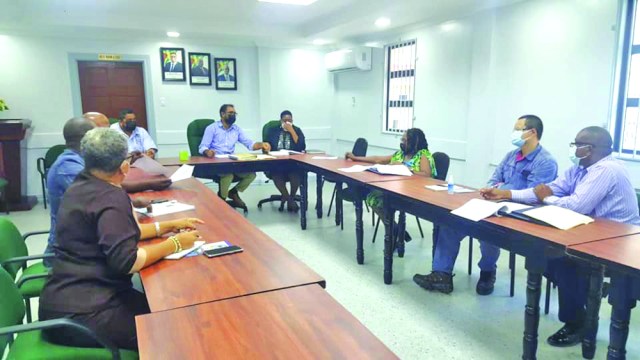 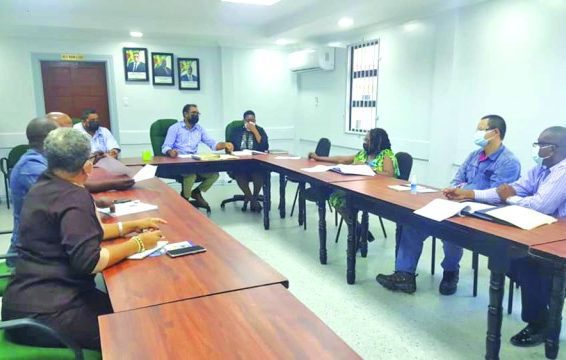 Chief Labour Officer and union representatives at the discussion on Friday

In light of strike action by workers at the Bosai Bauxite Mining Company, the Labour Ministry engaged the management of the company and the National Association of Agricultural, Commercial & Industrial Employees’ (NAACIE) representatives.

The meeting was convened by Chief Labour Officer Dhaneshwar Deonarine, where proposals were adduced to bring the strike action to an end.

The Union responded positively and agreed with the tabled proposal and to call off the strike.

Additionally, a statement posted on the Labour Ministry’s social media page related that a Terms of Resumption (TOR) agreement was signed between the parties. These include the Union shall call off the strike with immediate effect; the Union undertakes to ensure that there is full resumption by October 23 and there shall be no victimisation by either party and the status quo ante shall remain.

Further, the Chief Labour Officer will host a conciliatory meeting on Monday, October 25, to discuss the matters which led to the strike with the aim of bringing a resolution.

“The Ministry remains committed to promoting a stable industrial relations climate and as such, welcomes the efforts of good faith made by both parties to call off the strike and engage in conciliation,” the release stated.

On Thursday, a number of employees attached to the Bosai Minerals Group Guyana Incorporated downed tools over what they described as “unsatisfactory” across-the-board wage and salary increases.

According to the employees, the decision to decrease the percentage of wage increase this year is unfair, more so since the cost of living in the country has skyrocketed.

“The cost of living gone up 14 per cent. We’re asking for 10 per cent because we would have worked very hard…because Bosai never shut down during the pandemic. We worked every day once we’re scheduled to work. It’s unfair for management to make a rash decision like this, and not moving from where they are,” one employee stated.