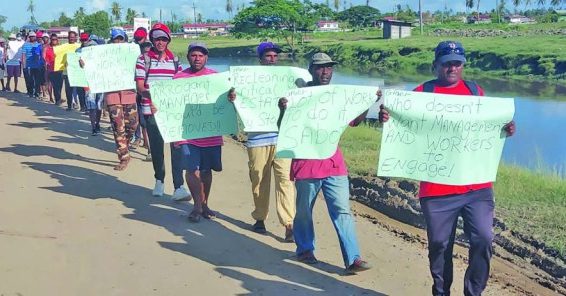 Field workers attached to the Albion, Rose Hall and Port Mourant Sugar Estates downed tools for the past few days due to the lack of funds to pay them for clearing the canals.

Venting their concerns, the workers took to the streets on Friday during which they requested to be returned to clearing the canals which fall under the National Drainage and Irrigation Authority.

The 92 workers from the various estates were on Wednesday told that they would have to take up other jobs in cultivation since the National Drainage and Irrigation Authority (NDIA) will no longer be providing funds for the cleaning of canals.

One of the workers, Winston Dey, who has been working as a recleaner for the past 11 years at the Albion Estate, related that at some point in time, they will have to return to the canals where they are paid a day’s pay to clean 300 rods.

Dey along with others was reassigned to planting cane and weeding.

“It is very hard because we have to do hand weeding work, we have to chop bush and different kinds of work, so we are asking for them to give us back our recleaning work. Right now it is hard for us.”

Sugar workers at the protest

As recleaners, they clean canals to that the punts can traverse freely to transport fertilisers to the fields and also to transport canes to the factory.

“What they told us is that they don’t have money to pay us as recleaners. They did not say anything about when the recleaning work leaves back what will become of it,” Dey added.Another worker, Khemraj Jaikarran of the Rose Hall Estate recalled being told that he and the others would have to work as weeders.

“They say the decision came from higher management and they can’t do nothing about it. They came and reach the Agri Manager and the Human Resource Officer and told us that the only alternative work they have for us is to do weed and relief, cut cane, plant cane, and clean punts,” he stated while urging the relevant authorities to intervene.

However, General and Agriculture Workers Union (GAWU) Berbice representative, Harvey Tambron during the protest explained that he received a telephone call from the field officer at Rose Hall estate on Wednesday informing him that management had stopped the recleaners from performing their normal duties.

He said he met with workers and was told that there were no consultations on the issue. Tamdron further related that a superintendent of works was present at the meeting. 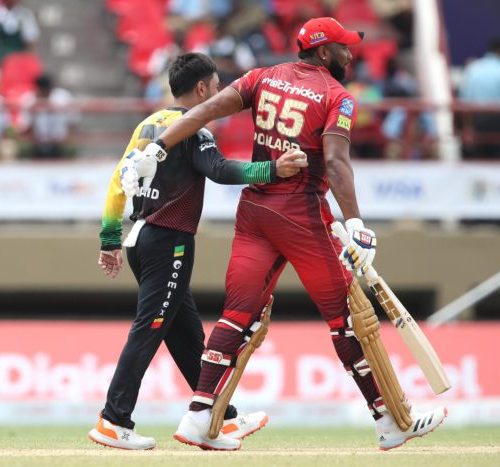 TKR and Patriots serve up an instant classic

This publication understands that the NDIA had stopped refunding monies paid to recleaners to GuySuCo.

“This left us in shock because obviously management should have been able to know beforehand that the funds are being depleted and there will be no money to pay these workers,” Tambron said.

The Union had promised to make every effort to ensure that the issue is addressed in a timely manner. However, after several meetings between the Union and government officials, the Estate Manager on Thursday maintained that the situation remained the same.

“The estate needs to have the canals clean because we have the rompers go in there which service is the cane harvesters, we have a fertiliser, plants go in through the canals so the fertilising gang will be affected as well as the planting gang. So the canals are a very important part of the estate’s daily operations. If it’s every single day these canals are being used. Everything seems to be pointing to the Chief Executive Officer. Several managers told the workers that the decision came from the top, pointing to the Chief Executive Officer,” Tambron added.

Agriculture Minister Zulfikar Mustapha reportedly intervened and it was expected that the matter would have been resolved on Friday but nothing has been done.