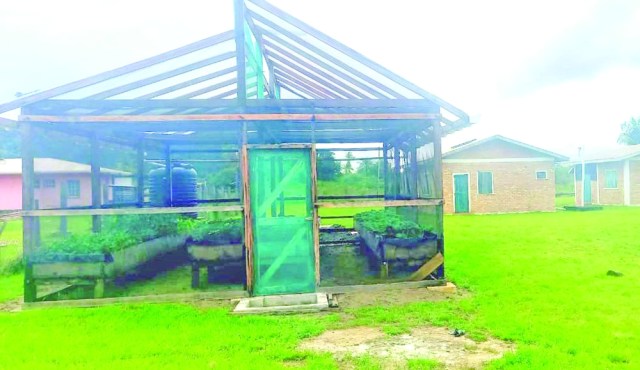 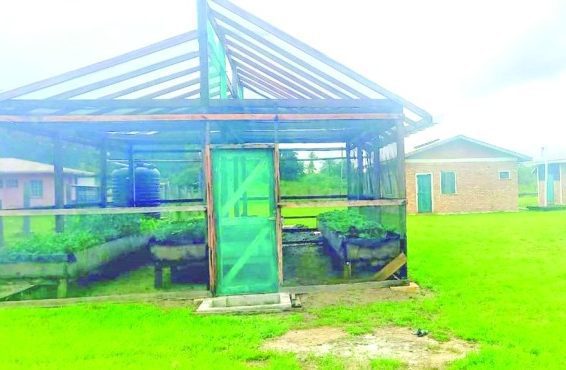 Residents of Aranaputa village and surrounding areas in the North Rupununi are now able to source fresh vegetables following the successful completion and operation of a cash-crop project in the community.

The shade-house project was undertaken by the Aranaputa Peanut Factory, in collaboration with the Inter-American Institute for Agriculture (IICA) and the National Agricultural Research Extension Institute (NAREI), through funding provided by the Basic Needs Trust Fund (BNTF).

Aranaputa, which is sometimes called the Aranaputa Valley, given its location between the mountainous terrain of the area, is located within the Annai district.

Planting of crops in the village commenced some five weeks ago, and pak-choi, lettuce, celery, tomatoes and eschallot have thus far been successfully cultivated in the plot, and are ready for sale. Reports are that persons within North Rupununi have already indicated an interest in purchasing the produce.

According to Sonia Sears, who serves as manager of the peanut processing factory, where the shade-house was built, training was undertaken in March this year for three days, and 15 persons were identified for training under the project. She said the project was slated for commencement last August, but a few delays resulted in shifting of the date.

Sears said community support workers (CSW) from the area were identified to participate in the project, given their availability and their ability to pass on the knowledge gained to other residents. She said several workers from the factory were also trained in plant techniques and general agriculture practices.

As regards the benefits of the project, Sears noted that the produce is readily available for sale, and produce will also be sold to schools in the area for the hot meal project undertaken there. 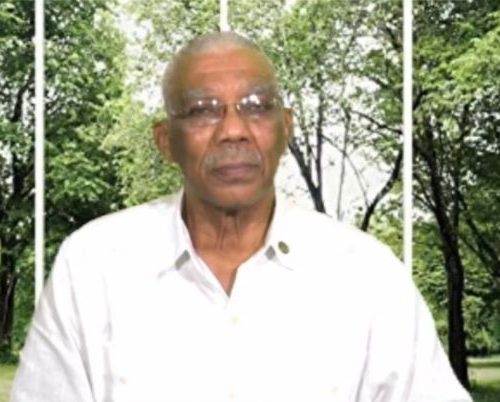 “So we don’t have to send for greens to Lethem, we have all the necessary greens right here,” she added.

Gillian Gonsalves, who oversaw aspects of the project’s implementation, told Guyana Times that she was trained by the BNTF to identify the shade house design that was best suited for the area. She was also trained in how to prepare a plan for such a project, as well as prepare the land for cultivation.

Gonsalves said participants were trained in shade house management and record keeping. At the moment, she serves as manager of the shade house, and while she chatted with this newspaper, she was busy preparing plants for cultivation.

Over the years, farming in the Rupununi was explored in many ways. In 2017, residents of the village of Kwatamang, which is also located at Annai, successfully embarked on the cash-crop project utilising an old corral. A variety of crops were planted at the site, but residents noted at the time that marketing of the produce was an issue.

Residents of Aranaputa are planning to embark on an ambitious marketing strategy in order to sell their produce, which will be planted continuously at the site, with scope for expansion once the demands of the project exceed the current state.