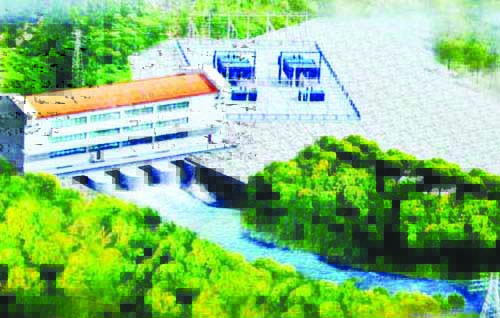 The Amaila Falls Hydropower Project (AFHP); the construction of which was recently awarded to China Railway Group, will not only address the blackout woes experienced by ordinary Guyanese, but also boost Guyana’s manufacturing sector.

During a recent interview, Finance Minister Dr Ashni Singh spoke of Amaila Falls and what Guyana can expect from the hydropower project. For instance, he said that the project has the potential to reduce the blackout woes many experience.

“I don’t believe there is anybody in Guyana who does not appreciate the impact that inadequate, unreliable and expensive energy has had on our country. And I’m not only referring to the inconvenience we suffer in our homes. That, for a long time, has been a bugbear on daily life in Guyana,” the Minister said.

“So, for a long time the citizenry at large has recognised how important it is to increase the production of electricity and its reliability. And of course, the citizenry has also been paying electricity bills that they consider to be more expensive than it should. So, there is amongst the public a strong recognition of the importance of addressing the problems of the electricity sector.”

“Inadequate supply of electricity has also been a significant bugbear to economic development in Guyana. In particular, I want to highlight industrial and manufacturing and [related] economic activities. For a long time, we have been unable to realise a functional and competitive industrial sector, specifically because electricity is as expensive as it is.”

“So, for that reason also from the point of view of developing industrial and manufacturing activities and the jobs those would create, a project such as Amaila Falls is also absolutely important,” the Finance Minister said.

A few days ago, it was announced that Cabinet had granted its no objection for China Railway Group Limited to construct the hydro project. China Railway is no stranger to Guyana, having been granted the contract for the East Coast Road Expansion project.

The project will be built under the BOOT model (Build Own Operate Transfer), which will see the Guyana Power and Light buying power from the company at no more than US7.7 cents per kilowatt.

Harmon to contest for PNC leadership

According to the Finance Ministry in a statement, the award of the contract follows the publication of a request for proposals by Government in various national newspapers during the period July 25 to August 15, 2021.

Four companies, the Ministry said, submitted proposals, and China Railway Group Limited was identified as the most “capable partner” by the Evaluation Committee after a rigorous evaluation process, following which the National Procurement and Tender Administration Board (NPTAB) submitted the relevant recommendation to Cabinet for “no objection”.

The AFHP was first identified in 1976 by the Canadian company “Monenco” during an extensive survey of hydroelectric power potential in Guyana. Various studies have since justified and strongly supported the construction of the AFHP.

The revival of the 165-megawatt Amaila Falls Hydropower Project was one of the promises made by the People’s Progressive Party/Civic (PPP/C) in its manifesto. The project was initiated under the previous PPP/C Administration but was scrapped by the coalition Administration which had controlled the National Assembly by a one-seat Opposition majority.

The Amaila Falls Hydropower Project was the flagship of Guyana’s Low Carbon Development Strategy (LCDS). Amaila was expected to deliver a steady source of clean, renewable energy that would have been affordable and reliable, and was envisioned to meet approximately 90 per cent of Guyana’s domestic energy needs while removing dependency on fossil fuels.