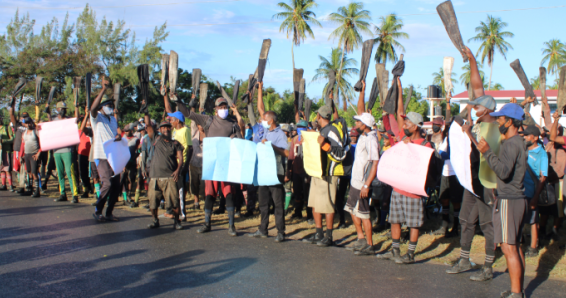 Albion Field Workers during the protest

Field workers attached to the Albion Sugar Estate, Corentyne, Region Six (East Berbice-Corentyne) today downed their tools and staged a protest exercise, demanding that the $250,000 cash grants announced for severed workers also be extended to them.

Vice President Dr Bharrat Jagdeo announced last week that each sugar worker who was severed under the previous administration will receive $250,000 from government.

“By January or so, each sugar worker who was severed would also get another $250,000 on their severance. That would be between $1.7 and $1.8 billion, because we have 7,000 workers who were severed who will all get that,” Jagdeo revealed during an outreach in Berbice.

But scores of Albion workers stood in front of the estate and literally threw their cutlasses on the ground, saying that they will not return to work until their demands are met.

The workers are contending that severed workers have already received their severance, many of them have been rehired while others found employment in other industries.

The workers are also demanding that they benefit from the flood relief cash grants which are being distributed to farmers and households which were severely affected by the floods.

According to the workers, during the flood, they were unable to work for six weeks and therefore, did not get paid. As such, they believe they are equally entitled to flood relief.

The protest action is not being supported by the Guyana Agriculture and General Workers Union (GAWU), which represents the fields workers.

INews understands that GAWU is currently in discussion with the government over several workers’ concerns.