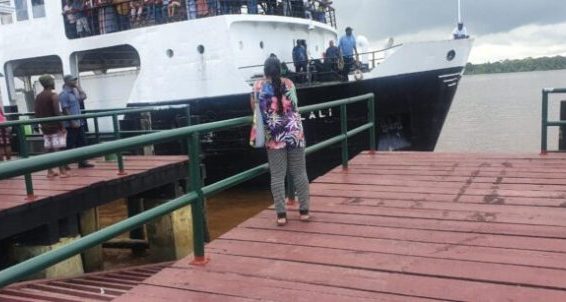 After a 13-year hiatus, residents of Fort Island, Region Three are now benefitting from the reintroduction of the ferry service which began on August 27.

The MV Malali will service the island.

The reintroduction of the ferry service was made possible following the PPP/C Administration’s $82 million investment that saw the construction of a new stelling on the island.

The return of the ferry service is also the fulfilment of a commitment made by government upon completion of the stelling back in May.

Fort Island is home to about 95 persons and over 200 persons from the catchment areas. Agriculture is one of the main economic activities of the island.

With the ferry now back in service, persons will not only be able get their produce to the market, but also sell to persons who stop with the ferry on the island.

The island which is also a major tourist destination, is home to Fort Zeelandia which was built in 1744. It is also home to the Court of Policy, a Dutch Heritage Museum which is the only of its kind in Guyana.

It is one of the stops on many of the circuit tours in the Essequibo River. Government has already signaled its commitment to further develop the tourism circuit in the Essequibo.

Transport and Harbour’s General Manager Marcelene Merchant disclosed that the ferry will, “every Saturday while on its way to Bartica, the ferry will make stops to Fort Island Stelling whether it is to drop off or to pick up passengers or their cargo and also on the return from Bartica on Sunday the ferry will also stop at Fort Island.”

However, the General Manager noted that systems are in place should the need arise for the ferry to stop during the week.