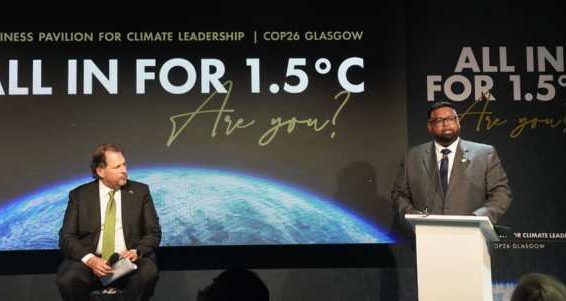 President Dr Irfaan Ali said that the achievement of a Climate Vulnerable Fund (CVF) would not only be beneficial to vulnerable countries but will also create investment opportunities for climate-prosperous economies around the world.

The Guyanese Head of State made this statement while delivering feature remarks at the “We Mean Business” Pavilion at the Scottish Events Campus (SEC) alongside US billionaire Marc Benioff after endorsing the Dhaka-Glasgow Declaration on Forests and Land Use as part of the CVF.

At the United Nations Framework Convention on Climate Change (UNFCCC) Conference of Parties (COP) 26 event, President Ali emphasised that there are tens of millions of people who are being unfairly hurt by climate change they did not cause. This he said is undoubtedly tragic and should not be the case.

“These people should instead be looking towards a future of resilience and climate prosperity.”

The President said that he hopes the world will recognise that achieving the vision of a CVF will not only benefit the vulnerable countries but “will also create trillions of dollars in investment opportunities for businesses who wish to invest in the building blocks of the new climate-prosperous economies”.

He noted that these investments can be done in areas such as renewable energy, digital infrastructure, sustainable agriculture and an array of other low-carbon industrial and employment opportunities that fall in line with a far-reaching and comprehensive vision.

“The CVF is doing more than just calling for this ambition to be achieved; its members are setting out practical steps to get to a future, not defined by climate vulnerability, but as the Prime Minister of Bangladesh Sheikh Hasina and current chair of the CVF puts it– a future of climate resilience followed by climate prosperity.”

It is against this backdrop, the President said he supports the commitment from companies and businessmen such as Benioff who have offered support.

The Head of State told the forum that while the Dhaka-Glasgow Declaration calls for many things, one of its pillars is a call for the world to work together with knowledge and input from the private sector.

“And yes, the private sector is a partner in this to support the development and implementation of Climate Prosperity Plans (CPPs) to realise a collective economic opportunity for countries and businesses.”

The President said that the declaration also calls for a 2020-2024 Climate Finance Delivery Plan, totalling US$100B annually, in support of climate action by developing countries with a 50-50 split of funds between adaptation and mitigation.

“The UK Presidency of the COP26 can, and should, ensure that this Delivery Plan is independent – and that monitoring efforts incorporated are done by expertise in the developing countries and not just donors. This is an important point – the monitoring and the transparency process must involve expertise from developing countries. We are already seeing double accounting in how we are accounting for the US$100B.”

President Ali added that the Declaration also supports a major reduction in the share of climate finance provided as loans.

“These simply worsen debt burdens and lead to a perverse outcome and consequently they prevent investment in greater climate action….Together we can make climate action a story of aspiration and opportunity. We can take that step today.”

Berbice porter dies after falling out of canter

President Ali lobbied for there to be a transparent accounting process, especially as it relates to the US$100B pledge.

“I have heard various figures in relation to the $100 Billion pledge and how much has actually been met, but in my own assessment what we are seeing is a lot of reorganisation of existing finances, not new finances. Existing loans that were aimed at helping developing countries are now converted as being part of the $100 billion pledge.”

He explained that if this reorganisation is done, a school, for example, that might have a small solar panel to provide light for a classroom could be classified as part of the pledge.

“We have to guard against such accounting, and we have to commit to a transparent process when we talk about the financing. This is important. What is also important for us, developing countries and vulnerable countries, is to understand that climate change is not an isolated problem. Climate change is linked to issues of food security. It is linked to issues of livelihood options and vulnerability from at-risk communities. So, our climate plan must lead to a prosperity agenda that is broad in nature that addresses fundamental needs of all the people of the developing world whether it is for health, education, food security or other services.”

“We are decarbonising our domestic energy mix, creating low carbon jobs and economic opportunities, and investing in protecting against climate change that has already happened. At the core of our vision is maintaining our rainforest – which as part of the Amazon and the Guiana Shield, is almost as big as England and Scotland combined.”

He added that these forest stores many giga-tonnes of carbon, “helps to provide the world with freshwater, and harbours amazing biodiversity – including four per cent of all known plant species, more bird species than the entire United States and nearly three per cent of all animal species.”