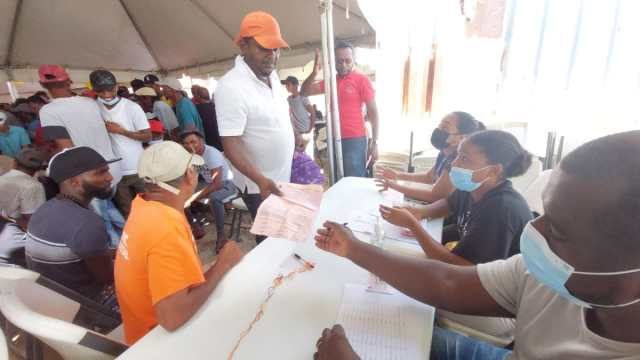 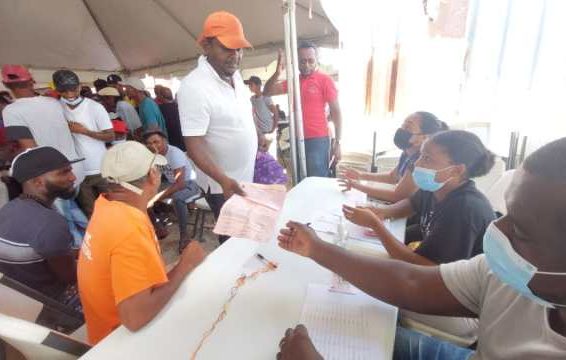 – VP Jagdeo urges fishermen to qualify themselves in other fields

The Vice President told the large gathering of fisherfolk that while the announcement of the grant was made a while back by President Dr Irfaan Ali, the Government had to take some time to verify the list of beneficiaries.

However, he explained that this is part of the Government’s efforts to cushion the effect of the rising cost of living due to a number of external factors, including the war in Ukraine and the COVID-19 pandemic, which have affected the global supply chain.

In addition, he told those gathered that they need to acquire a second skill while noting that they can continue fishing even when doing so.

“We have a big shortage of carpenters – you can’t find a carpenter in Region Four; sometimes between $10,000 and $12,000 they demand per day, plumbers, electricians and welders. We need a lot of welders – in a year you can be certified. In some places a certified welder can get US$2500 a month. That is the future.”

He pointed out that there is a great scope in the hospitality industry and high-end agriculture.

“So, you can’t just go and fish because you will be left behind if you only have that skill. You have to make some sacrifices if you want to make some progress. Jagdeo assured that Government is prepared to provide the programmes and also pay for training…so you can develop yourself, I can assure you that,” he told the fishers.

He also made reference to the part-time jobs initiative which enables persons to earn up to $40,000 per month for at least 10 days of work in Government Ministries and other agencies, the COVID-19 and farmers’ flood relief grants, which were also part of efforts to supplement household income.

“So, we’re trying to put more money into people’s pocket, expand employment. So that whilst we’re generating the big plans for the development of the country and creating better jobs, people can have a better life. To help the farmers we have now given them some free fertiliser because their cost of fertiliser went up, so that we can help them also. So, we’ve been working with all the interest groups and we know that the fishermen too, they face difficulties,” Jagdeo noted. Given the seasonal nature of fishing, the Vice President urged fisherfolk to explore other options to earn, such as small business ventures, for which there is Government support.

“Our economy is shifting in a different direction, so we are preparing for that shift,” the VP noted as he highlighted that a portion of the revenues accrued from the oil and gas sector will be used for major transformational projects in the health, education, infrastructure, agriculture and other sectors.

As it relates to the harassment of fishermen who have to ply their trade in Surinamese waters, the Vice President said the Administration is aware of the challenges they face and will be writing the Caribbean Community (Caricom).

“I want to assure you, some of you may be fishing in those waters, we can’t tell them what to do, but we are not just going to be sitting on our hands,” he assured.

The Vice President also addressed a number of concerns raised by the residents. He was accompanied by Agriculture Minister Zulfikar Mustapha, Local Government and Regional Development Minister Nigel Dharamlall and representatives of the Agriculture Ministry.

The Vice President recently spearheaded the distribution in Regions Six, Four, and Three.