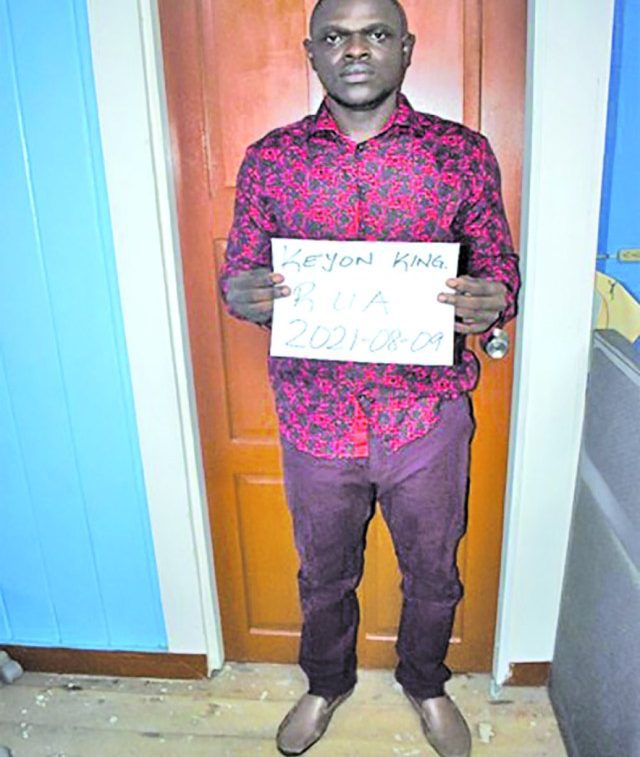 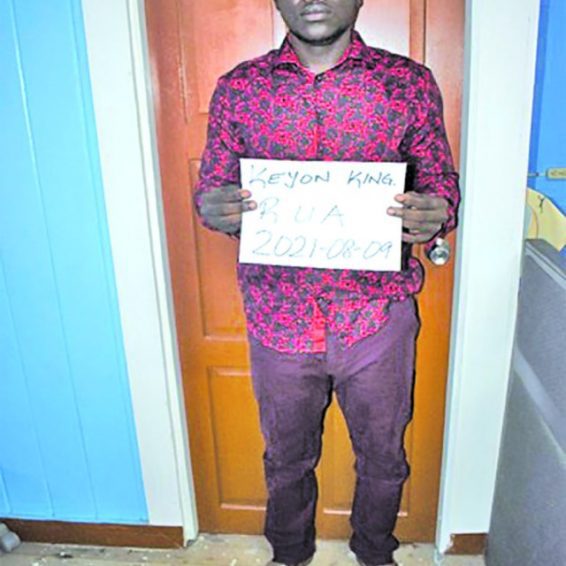 The sentence was imposed by Principal Magistrate Sherdel Isaacs Marcus, who is presiding at the Georgetown Magistrates’ Courts. In mid-October, King who was charged with four counts of robbery under-arms changed his previous not guilty plea to guilty.

At his last court appearance, a remorseful King, who served in the army for 15 years, told the Magistrate that he got involved in the crime because he was struggling to maintain his family. He explained that he was demoted, and was under tremendous pressure since he is the sole breadwinner for his family.

The man further related that he was finding it difficult to save money to build a house, and as such, he did not think twice when an offer was made to him to rob the establishment. King, nevertheless, apologised to his family and the GDF for his unlawful act.

He was sentenced to three years imprisonment on each of the four charges. The magistrate, however, ordered that the sentences will run concurrently.

CCTV footage of the bandits executing the robbery in August 2021

On August 5, at Wallison’s Enterprise, Gordon Street Kitty, King, while in the company of others, robbed Francis Santos Lumes of raw gold worth $20 million and $38 million and other valuables; Fernanda Carmichael of an iPhone valued at $350,000 and Wellington Batista DaSilva of a phone valued $160,000.

King, 32, was charged along with 36-year-old Delroy “Bug” Jackson and Peon Lee also known as “Nino Brown”, both security officers attached to the business. They, however, have pleaded not guilty to the charges and are currently remanded prisoners.

The Guyana Police Force has issued a wanted bulletin for the driver of the getaway car, and two other men who were caught on CCTV camera robbing the business.

Wanted are Antonio Maraj also called “Pluckin” or “Thuggy” of Leopold Street, Georgetown; Agricola, Greater Georgetown, and Buxton, East Coast Demerara (ECD). Maraj was one of the persons caught on the CCTV recording during the commissioning of the robbery.

Police are also on the hunt for ex-soldier Jamal Hazel, who was also caught on camera. The 24-year-old is from Guyhoc Park, Georgetown. Also wanted is the driver of the getaway car, Dequan King also called “Titus” or “Quanie” of Lot 20 D Field Sophia, Greater Georgetown.
Police reportedly found the car that was used in the robbery parked outside a house at 435 Cummings Lodge, East Coast Demerara. Upon searching the premises, Police found and seized several household items. It was reported that neighbours told the Police that the man who lived there left for the interior.

It was reported that on the day in question at about 10:00h, three armed men went to the Lot 23 Gordon Street business and indicated that they had gold to sell. However, within minutes of entering the establishment, they held several staff members at gunpoint and demanded that they open three safes where the money and gold were secured.

After committing the robbery, the armed men bound and gagged the cashier and two other staff after which they locked them in a room. Moments after escaping in a white motor car, the cashier managed to free herself and raised an alarm.

The Police were called in and immediately one of the two security guards was arrested. Based on intelligence and information received, the detectives went to a house in B Field Sophia where they conducted a search and found some personal items belonging to the owner of the business.

There, another security guard was taken into custody. The security guards were, however, interrogated during which one of them confessed to being part of the plot to rob the establishment.

Following leads, the detectives turned up at the home of King at Vergenoegen, East Bank Essequibo (EBE), where a search was conducted in the house but nothing substantial was found.

Nevertheless, during a search in the yard, the detectives noticed a disturbed piece of land and decided to dig. It was then, a bucket was found buried, which, when checked, contained $15 million in $5000 notes and an additional $3 million in $1000 notes.

The bucket was reportedly wrapped in two black garbage bags while the money was neatly packed in transparent bags. The operation was conducted by members of the Major Crimes Unit and members of the business community, especially the gold industry.

Following the successful operation, King along with his wife was arrested. During interrogation, he told investigators that he was part of the initial plan to rob the gold establishment but he was not one of them who committed the act.